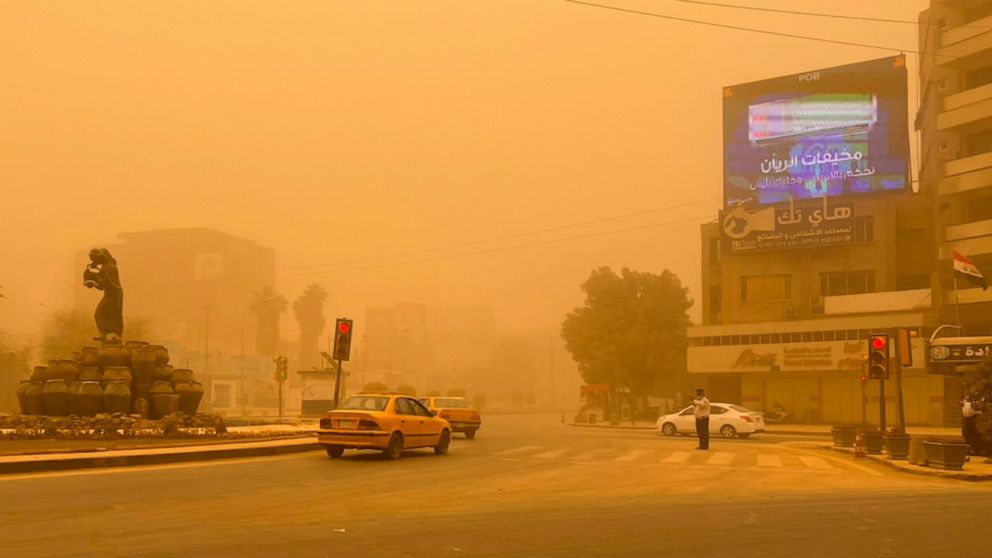 BAGHDAD — Hundreds of Iraqis rushed to hospitals with breathing problems Thursday and the Baghdad airport suspended flights for several hours as a thick sandstorm blanketed the country, the fifth to engulf Iraq within a month.

Iraqi state media said most of the patients suffered respiratory issues as clinics across the country’s north and west struggled to keep up with the influx. Authorities urged citizens to stay indoors.

Iraqis awoke to an ochre-colored sky and a thick blanket of dust covered the roads and buildings with an orange film. Visibility was low and drivers kept car headlights on to see the road.

Flights scheduled to depart overnight and on Thursday morning were postponed, an airport official told The Associated Press, speaking on condition of anonymity because he was not authorized to talk to reporters.

Flights resumed by the afternoon, when the dust began to clear.

Iraq is prone to seasonal sandstorms but experts and officials are raising alarm over their frequency in recent years, which they say is exacerbated by record-low rainfall, desertification and climate change.

However, Azzam Alwash, head of the Nature Iraq non-profit organization, warned that climate change alone doesnt give the whole picture and that inappropriate farming practices and mismanagement of water resources have contributed to the problems.

Climate change has become a very convenient excuse for officials to avoid responsibility for not taking action over the last 20 to 40 years, he said.

Desertification, resulting from old irrigation practices dating back to the Sumerian age, and rising water salinity are also factors, he said. These are policy issues.”

The World Bank has warned that Iraq could suffer a 20% drop in water resources by 2050.

Issa al-Fayad, an official with the Environment Ministry, said Iraq could face 272 days of sandstorms a year in the coming decades.

At least 700 people sought medical care in Iraq’s western province of Anbar, and dozens more in the provinces of Kirkuk, Salahaddin and Najaf, state TV reported.

At the Sheikh Zayed Hospital in Baghdad, people lined up outside the emergency room and staff stocked up on more meds as weather forecasts predicted the storms would continue throughout May.

Ayat Haitham, a nurse, was busy treating patients but also tried to reassure them that all the drugs used for treating breathing difficulties and also oxygen were available in big quantities. Australia CEOs Warn on Skilled-Worker Shortage Ahead of Election

Takeaways off Round One of the MLS playoffs

Investors prepare for a founder downturn. Or influx. Wait,...

Giants ‘leader in the clubhouse’ for Jimmy Garoppolo trade?

Next Africa: Will The Lights Come Back On?

US woman accused of smuggling Mayan relics in Guatemala

EXPLAINER: How real are Putin’s nuclear threats in Ukraine?

Vermeer exhibit to unite Milkmaid, Girl with a Pearl...

Opinion | The Future of the West Is in...

Stocks steady, bond yields cling to highs ahead of...

Hochul, Adams disagree on how to handle conceal-carry requests...

Everything you wanted to know about Elon Musk and...

Newcastle United may already be part of elite in...

Jamie Dimon is braced for stocks to go down...

Queer Pop’s Next Generation Is Pushing The Boundaries Of...

Elden Ring Is the Game of the Year

EXPLAINER: A huge jump in Social Security payments is...

GM is in the energy business now – TechCrunch

Djokovic says he can’t play US tournaments due to...

Cheslie Kryst's mom speaks out on her daughter's mental health battle for...