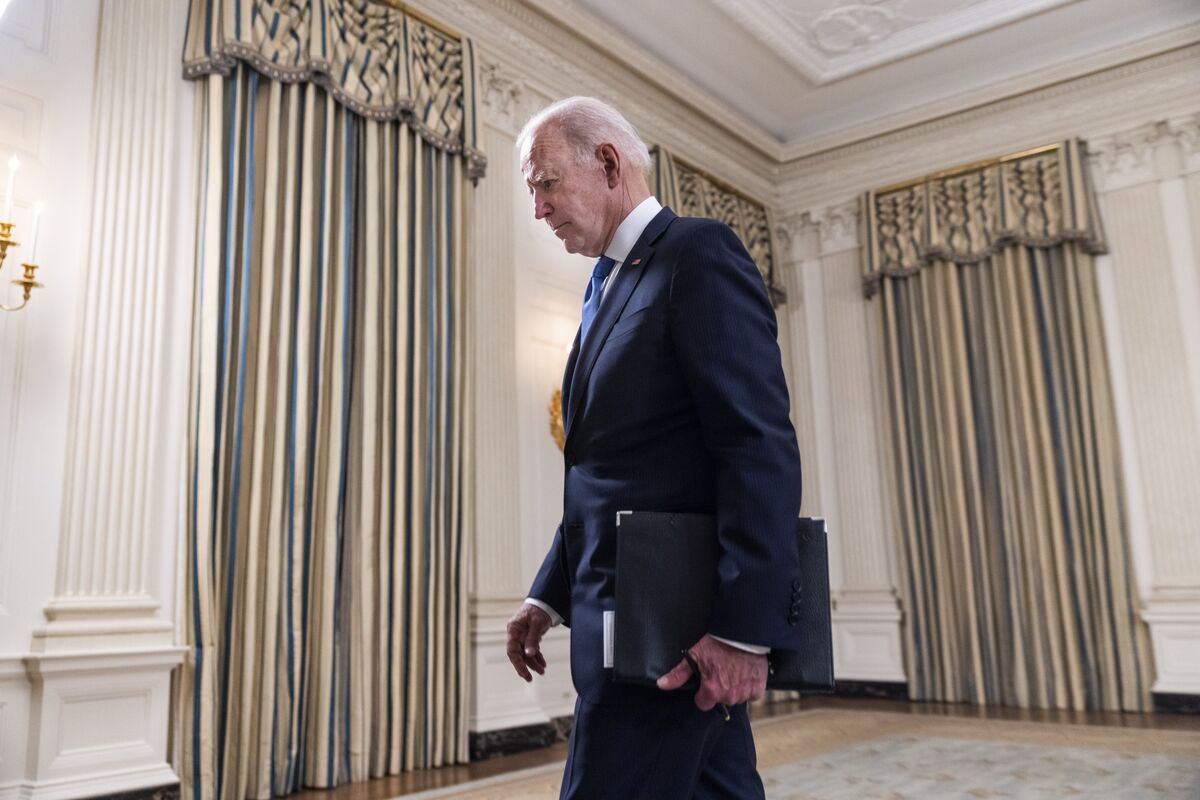 President Joe Biden said Wednesday hes open to compromise to reduce his proposed hike in the corporate tax rate as he seeks to fund his sweeping infrastructure and jobs proposal.

Im open to compromising, yes. It doesnt have to be exactly what I say, Biden said at the White House when asked if he would accept raising the corporate tax rate to 25% instead of the 28% he has proposed.

The president said he has spoken to chief executives about his planned tax increases on corporations, without naming them. But Biden said he would not back down from his demand that his proposed $2.25 trillion package be offset by raising revenue.

Im not willing to deficit spend, Biden said. They already have us 2 trillion in the hole.

The presidents comments send one of the strongest signals yet that if his economic proposal becomes law, it will likely be with a less drastic corporate tax hike.

Senator Joe Manchin, a centrist Democrat from West Virginia, has said he opposes raising the rate to 28% from the current 21%, but added that he could support a 25% tax. With near universal opposition expected from Senate Republicans, Biden cannot afford to lose the votes of any other Democrats if he seeks to use a special budget process to pass any tax increases. The share listing of BYD Semiconductor has been suspended due to a regulatory investigation.
Read more

Valve claims the Steam Deck can handle any game...

While many are skeptical of the Steam Deck's ability to play demanding new titles, Valve thinks you can put those fears to bed.
Read more

The men assisted those responsible for attacks in 2017 that killed 16 people and injured 140.
Read more

Sen. Jim Inhofe (R-Okla.) told an Environmental Protection Agency (EPA) nominee, Radhika Fox, on Wednesday that if she did not "behave" he would "talk to your daddy."...
Read more

Putin and Syria’s Assad hold talks in Moscow on...

Thailand's DTAC and True Corp. plan a merger that they say will create an “equal partnership" for pursuing opportunities in the tech sector
Read more

EU regulator recommends boosters for wider group than in...

The European Medicines Agency-the top drug regulator in the EU-has authorized the use of a third dose-also referr...
Read more

Jason Sudeikis reveals why he doesn’t use his birth...

Biden pushes the importance of vaccine mandates in Illinois

President Biden on Thursday stressed the importance of finishing the job and taking advantage of ending the pandemic. Ed O'Keefe reports.
Read more

Authorities are investigating an accident at an Iowa amusement park on Saturday that resulted in the death of an 11-year-old boy.Michael Jaramillo died on Sunday after the boat he was in on the Raging River ride at...
Read more

Star Trek shows there’s more than one way to...

Leicester rallies for 1-1 with 10-man Southampton in EPL

Leicester’s bid for Champions League soccer suffered a minor setback when it had to settle for a 1-1 draw with 10-man Southampton in the English Premier League on Friday.
Read more

The Memo: Biden tries to flip the script on...

President Biden's plan to increase taxes on wealthy Americans is reigniting one of the fiercest divides in politics - how much should the government do, and who should foot the bill?The president...
Read more

Biden gets his infrastructure win and an education on...

Final passage of a massive public works bill Friday provided President Joe Biden what had increasingly seemed like a vanishing ideal: A major, bipartisan accomplishment that has the power to improve the lives of millions of Americans.
Read more

Hello. Today we look at whether Chinese factories are set to fan global inflation, Republican concerns over rising prices in the U.S. and the demographics of patent-applications.
Read more

Employers Must Be Flexible or Face ‘Revolt’: Deloitte (Radio)

Instagram has only ever allowed photo and video uploads from its mobile app, but that might change soon with desktop posting now in testing.
Read more

Fauci gives the green light on trick-or-treating this Halloween

Dr. Anthony Fauci on Sunday gave the stamp of approval for kids to trick-or-treat outdoors this Halloween, one year after it was labeled a "high risk" activity due to the coronavirus pandemic.
Read more

The ninth installment of the film franchise “The Fast and Furious” drew the highest box office haul in the post-pandemic recovery over the weekend, CNBC reported on Sunday. The new film “F9” pulled in $70 million in box office sales during its...
Read more

U.S. Capitol Police (USCP) on Tuesday announced that it is opening regional field offices in California and Florida to investigate threats to members of Congress as it detailed measures to enhance security efforts in the...
Read more

India captain Virat Kohli says his side "love being written off" after the tourists recovered from finishing 191 all out in the first innings to seal a "special" 157-run victory over England in the fourth Test at the Oval.
Read more

A senior ExxonMobil lobbyist unknowingly told a Greenpeace activist that plastic disposal and recycling will be a “big business” for petrochemical firms.Keith McCoy, who was earlier recorded saying energy companies fought against “some of the...
Read more

Watch Roberto Mancini and Gianluca Vialli's passionate reaction to Italy's extra-time goals in their 2-1 victory over Austria at Wembley in the last 16 of the European Championship.
Read more

Retired Brig. Gen. Don Bolduc, one of the first Special Forces officers in the country after the Sept. 11 terror attacks, called the Biden administration's decision to withdraw the U.S. Military from Afghanistan a “geopolitical disaster of unparalleled propor…
Read more

Joe Root takes too long to review an lbw against Rohit Sharma, before replays show the batsman would have been out, as England face India on day three of the third Test at Headingley.
Read more

Unable to retrieve their investments, users of Turkish crypto exchange Thodex have filed a complaint alleging fraud, with their lawyer saying hundreds of millions of dollars may have been stolen. The head of the exchange has been unreachable and allegedly fle…
Read more

The museum reopens with a major exhibition celebrating club culture across the world.
Read more

Candidates in Iran's presidential election this month traded strong barbs in a debate on Saturday, accusing each other of treason or of lacking the education to run an economy devastated by three years of U.S. sanctions.
Read more

Kassidy Peters, the daughter of South Dakota Gov. Kristi Noem (R), announced Tuesday that she is relinquishing her real estate appraiser license and leaving the industry by the end of 2021 amid lingering scrutiny over whe...
Read more

Police in Arizona shot a driver Saturday who is suspected of ramming his truck into cyclists during a bike race to benefit a local school. According to the Show Low Police Department, officers sh...
Read more

Imagine traveling from one city to another at nearly the speed of sound. A milestone Wednesday in high-speed travel could make that closer to reality. Carter Evans reports on how the innovative mission called Hyperloop One could drastically cut down on travel…
Read more

Secretary of State Antony Blinken on Sunday suggested that the U.S. will not take punitive action on China for its handling of COVID-19, instead saying the government's focus "needs to be on building a strong system...
Read more

The Biden administration on Monday urged the Supreme Court to uphold the landmark 1973 Roe v. Wade ruling that established a woman's right to an abortion. ...
Read more

Most Florida students must wear masks, despite Gov. DeSantis

Review: Plush are the future of rock on debut...

The future of rock ‘n’ roll is in good hands with Plush, the all-female hard rock quartet whose self-titled debut album could be the best album of 2021
Read more

Michael D'Antonio writes that, while criticism has been piled on the Biden Administration for the chaos in Afghanistan, Olivia Troye reminds us that the Trump administration had four years to put in place an evacuation plan to bring our Afghan allies to safet…
Read more

Presented by Uber Driver Stories Good Thursday morning! Let me preface this lead-in by saying none of this is an April Fools joke. Bergen...
Read more

Credit Suisse CEO Thomas Gottstein signaled he’d consider further separating the asset-management unit from the rest of the bank after the Greensill Capital collapse, as he steps up efforts to limit the reputational damage from the supply-chain finance scanda…
Read more

The singer and actress says she drew from her experience of being abused in her teens when filming.
Read more

India collapse to 78 all out, losing four wickets in six balls as Craig Overton and Sam Curran both take two wickets in successive deliveries on the first day of the third Test at Headingley.
Read more

Kerry to visit China ahead of White House climate...

The House Budget Committee met Saturday to approve the $3.5 trillion plan for floor action, even as Democratic leaders struggle to finalize bill text that can pass both chambers.
Read more

Wham! bassist and "Heaven Help Me" singer Deon Estus has died at the age of 65.
Read more

China is stepping up anti-espionage activities amid worsening ties with the United States and a renewed focus on national security ahead of a key Communist Party anniversary later this year.
Read more

The economy seems to be gathering steam, though it is still far from fully recovering from the damage wrought by the pandemic, Federal Reserve Chairman Jerome Powell said. Neil Dutta, head of U.S. economics at Renaissance Macro Research, speaks with Bloomberg…
Read more

He’s been trying to transcend his identity his entire life. Now, to be mayor of New York, he just might need to embrace it.
Read more

Comey: “Release all the tapes”

Former FBI Director James Comey told the Senate Intelligence Committee he hopes there are White House tapes of his conversations with President Trump, as Trump seemed to suggest in a tweet. Comey said, "I hope there are and I will consent to the release of th…
Read more

Senate Minority Leader Mitch McConnell (R-Ky.) on Thursday condemned Democrats for their economic policies, saying they have destroyed progress that was made before the coronavirus pandemic hit.M...
Read more

Singapore’s top court has postponed the appeal hearing for a Malaysian man on death row believed to be mentally disabled, after he was diagnosed with COVID-19
Read more

The Realme 8s was launched in India last week and comes with MediaTek Dimensity 810 5G chipset with Dynamic RAM expansion up to 13GB RAM.
Read more