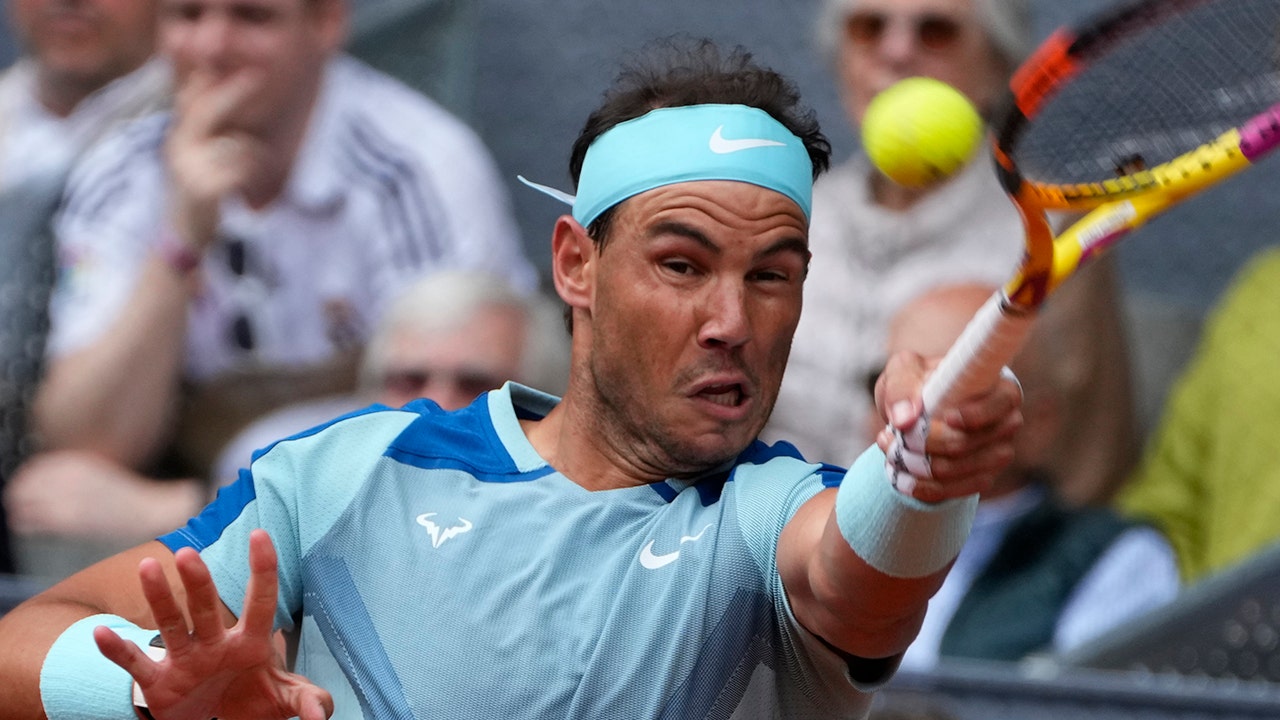 Rafael Nadal got off to a good start in his return from injury, defeating Miomir Kecmanovic in two sets to reach the third round at the Madrid Open on Wednesday.

Nadal showed few signs of rustiness in his 6-1, 7-6 (4) opening win at home. He cruised in the first set and recovered in the second after twice losing his serve following a rain interruption.

The victory lasted nearly two hours, but it was fast enough to allow Nadal to watch Real Madrids Champions League match later Wednesday night in the Spanish capital. Tournament organizers said Nadal asked to play in the afternoon so his match would not coincide with Madrids semifinal game against Manchester City.

Rafael Nadal of Spain returns the ball to Miomir Kecmanovic of Serbia during their match at the Mutua Madrid Open tennis tournament in Madrid, Spain, Wednesday, May 4, 2022.

Nadal is a Madrid fan and on Saturday gave the ceremonial kickoff at the Santiago Bernabéu Stadium before the team clinched the Spanish league title with a win against Espanyol.

The fourth-ranked Nadal had been out for nearly 45 days after a rib stress fracture halted his great start to the season, highlighted by winning his record 21st Grand Slam title with victory at the Australian Open.

“Coming from injury I always need to play many matches to regain my best form,” Nadal said. “Winning is very important to give me confidence.”

Nadal was cruising before getting injured in the semifinals in Indian Wells, where he lost the final to Taylor Fritz for his first defeat of the season. Nadal missed tournaments in Miami, Monte Carlo and Barcelona.

The third-seeded Nadal had been downplaying expectations of winning his sixth Madrid Open title, and first since 2017.

The 35-year-old Nadal looked sharp in the first set, though, breaking serve twice against the 32nd-ranked Kecmanovic. He struggled more after the match was interrupted for about half an hour with Kecmanovic leading 1-0 in the second set as the center-court roof had to be closed. Nadal was broken twice, including while serving for the match at 6-5, but eventually prevailed in the tiebreaker by converting his first match point with an ace.

Nadal could face a quarterfinal against Spanish teenage sensation Carlos Alcaraz, and a semifinal against either top-ranked Novak Djokovic or former No. 1 Andy Murray.

If he wins in Madrid, Nadal will move level with Djokovic on a record 37 titles in Masters 1000 tournaments.

The third-ranked Zverev is seeking his first title of the season. He lost to Stefanos Tsitsipas in the Monte Carlo semifinals. Zverev also won in Madrid in 2018.

“I thought I played very well. I just lost focus in the first set,” Zverev said. “Marin is a difficult opponent, especially with the altitude here, so I am happy with this match.”

Marc López retired after losing his doubles match with Alcaraz 6-3, 3-6, 10-7 to Wesley Koolhof and Neal Skupski. López, who won the Olympic doubles gold medal with Nadal in 2016, is joining the coaching staff of the Spanish great.

“Its never easy to play Simona,” said Jabeur, who lost to Halep in Dubai earlier this year. “Really happy with the fact that I took my revenge. I can see that Im progressing in my game and in other stuff. I hope I can continue with this level to play the other matches.”

The 21st-ranked Halep had 20 unforced errors and only eight winners. Transcript: Major Garrett and David Becker on “Face the...

U.S. Urges Pharmacists to Fill Prescriptions for Drugs That...

Queen Elizbeth II travels to Scotland for week of...

Amazon’s Echo speakers drop back to all-time-low prices in...

Biden to speak on ‘protecting our democracy’ as midterms...

EU official: Turkey will gain by curbing migration to...

What to know if you’ve applied for student loan...

We’re entering the next stage of the housing market...

Smiling Adnan Syed is cheered as his conviction is...

Windows 11’s Microsoft Store is getting some much needed...

These were the fastest internet providers in the US...

China Eastern crash: What do we know so far?

Man found in car at bottom of cliffs in...

WHO calls on Pfizer to make its COVID pill...

Veteran of ‘Cocoa War’ Prepares for Succession at Trader...

Your Weekend Reading: The ‘Unprecedented’ Failure of FTX

Unwed couples grew, US was more wired in COVID’s...

Judge Tells Billionaire to Pay More Than 3.5m a...

Davis Cup: Australia, USA, France and Spain all through...

Trump Sued for Battery by E. Jean Carroll Under...

One key economic sign shows that inflation in Europe...

Two of the ‘Big Four’ accounting firms pulling out...

T-Mobile Ups the Battle for Internet Customers With $500 Rebates