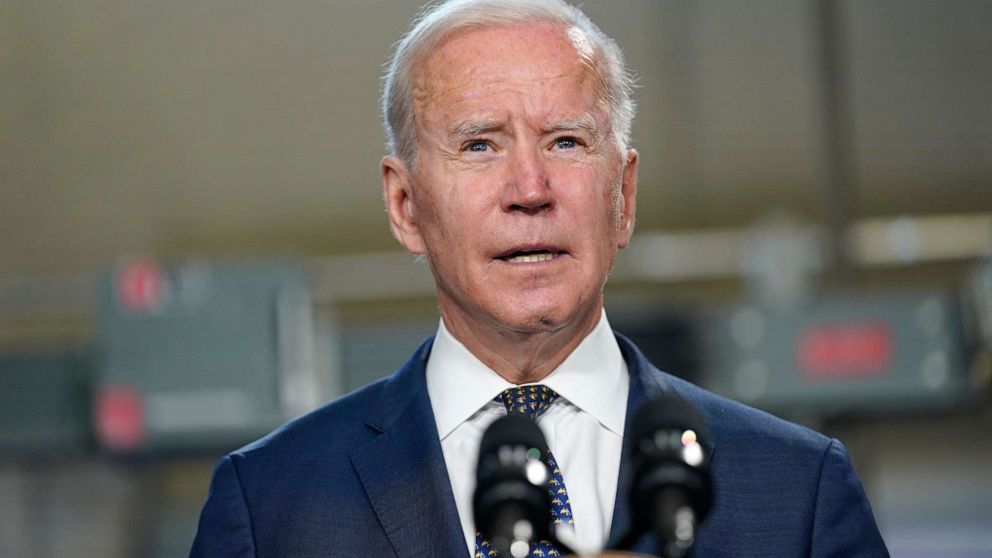 President Joe Biden said Monday that he wants to raise the maximum number of refugees allowed into the United States this fiscal year to 62,500.

The announcement comes after his administration had first said in February it wanted the cap at that number but before Biden backtracked in April and decided to leave a Trump-era cap of 15,000 in place.

Last month, when the president said he was going to leave the historically low cap in place, he faced fierce criticism from Democratic allies on Capitol Hill.

The blowback led the White House to promise to raise the cap within the coming weeks, and Monday, Biden said it was back to square one: 62,500 in the current fiscal year, which runs until the end of September.

It was a rare unforced political error from the Biden White House.

They blamed the situation on the southern border for overwhelming authorities, although refugee advocates argued the system for intaking those unaccompanied minors was different from that for dealing with refugees, many of whom had already been fully vetted and were awaiting flights to the U.S.

But Monday, the president also sought to set expectations, saying that just because that he was setting a cap of 62,500 — which is subject to a formal consultation process with Congress, “The sad truth is that we will not achieve 62,500 admissions this year.”

He said this cap would “reinforce efforts that are already underway to expand the United States’ capacity to admit refugees, so that we can reach the goal of 125,000 refugee admissions that I intend to set for the coming fiscal year.”

He also set expectations for next year.

“That goal will still be hard to hit,” Biden said. “We might not make it the first year.” The Secure Community Network has been building a shield over US Jewish communities. It saved lives in the Texas synagogue attack

Fauci: US should consider vaccine mandate for US air...

The analysis was posted late Friday ahead of a meeting of the agency's vaccine advisers to discuss the benefits and risks of vaccinating younger children.
Read more

Georgia abortion law to be argued in federal appeals...

Nobody beats Shelby Rogers six times in a row...

American Shelby Rogers was possibly searching for some inspiration when she watched a 41-year-old video of compatriot Vitas Gerulaitis before her third round match against world number one Ash Barty on Saturday.
Read more

What are NFTs and why are they worth millions?

Artwork is being "tokenised" and sold online for millions of dollars - but will the bubble burst?
Read more

Marc Thiessen: No American president has ‘fallen from grace’...

The names of the three people who died when in Amtrak train derailed in Montana have been released. Investigators are searching for clues to the cause of the crash. Meg Oliver has more.
Read more

The broadcaster says its involvement raised questions about its impartiality on some issues.
Read more

In August 1991, a group of hard-line Communist Party officials tried to remove Soviet leader Mikhail Gorbachev from power. The move sent shock waves around the world, which feared a rollback of Gorbachev’s reforms and his efforts to end the Cold War. The puts…
Read more

Florida has more new Covid cases than ever before

Florida reported nearly 21,700 new Covid cases, which is its highest one-day total since the start of the pandemic, according to federal health data released Saturday.
Read more

Harris says she had key role in Biden’s Afghanistan...

The vice president confirmed she was the last person in the room before Biden made the decision to move forward with withdrawing U.S. troops.
Read more

China National Petroleum Co (CNPC) said on Wednesday it plans for new shale oil production from formations within the area of the existing Daqing oilfield that will help replenish that site's diminishing output.
Read more

The head of Britain’s antitrust watchdog said he needs to pick his battles with tech giants such as Amazon.com Inc. and that global counterparts like the European Commission will often take the lead reining in Silicon Valley.
Read more

The state legislature is expected to vote later Monday on a congressional map that would draw four districts for Democrats, one for Republicans and one potentially competitive seat.
Read more

Top officials at the Department of Homeland Security (DHS) on Friday urged a newly established advisory committee composed of experts from across sectors to propose solutions to help tackle the growing wave of cyberattacks faced by the...
Read more

Miranda Lambert took the stage at the 2021 CMT Music Awards with Jon Randall and Jack Ingram to perform "Tequila Does."
Read more

MediaTek is the preferred chipset partner in India for smartphone makers in the first half of 2021, according to a report by Techarc.
Read more

Nico Hischier scored his second goal of the game with 2:04 left in overtime to give the New Jersey Devils a 4-3 victory over the Washington Capitals on Sunday.
Read more

CBO ‘unclear’ when it will have cost estimate of...

The Congressional Budget Office (CBO) said Wednesday that it is "unclear" when it will complete a cost estimate of the entirety of the social-spending package approved by House committees."The legislation being con...
Read more

The coronavirus pandemic might have canceled Memorial Day plans last year, but life is starting to return to normal for 2021 thanks to the distribution of COVID-19 vaccines nationwide.
Read more

Manchester City edge closer to the last 16 of the Champions League with a comfortable win over Club Bruges.
Read more

A team of scientists shows where some of the gas giant’s huge storms come from and how the process is similar to the buildup of extreme weather on our planet.
Read more

Marcus Williamson, a former Ohio State cornerback who played for the Buckeyes from 2017 to 2021 during the Urban Meyer and Ryan Day eras, made some shocking allegations on social media Saturday.
Read more

The government is being disingenuous by saying its guidance is voluntary, says an industry spokesman.
Read more

Weather conditions in Denver, where Los Angeles played the Avalanche on Sunday, prevented the Kings from flying to LA to host the Blues.
Read more

Tillerson on mission to mend fractured relationship with Mexico

The Georgia state Senate voted along party lines on Monday to repeal no-excuse absentee voting after the state sent to Democrats to the Senate and voted for a Democratic presidential nominee for the first time in de...
Read more

The latest escalation of Israeli-Palestinian violence has highlighted divisions among many U.S. Jews wrestling with how to best respond to the conflict and wrangling over the acceptable boundaries of criticism of Israeli policies
Read more

Thatcher Demko had 38 saves and the Vancouver Canucks withstood a late barrage Tuesday and held on for a 4-2 victory over the Calgary Flames.
Read more

A Cleveland-area prosecutor lashed out against armed auto thieves Saturday, one day after a city police officer was shot dead in an apparent carjacking.
Read more

In an effort to combat the image that San Francisco is bedeviled by pervasive retail theft, officials pushed back at that narrative with the release of new data.
Read more

Green is the new red in China. The country’s central bank unveiled a new lending programme that, by one estimate, could lead to nearly $1 trillion of annual investment in projects related to clean energy. It’s a bolder policy than from Western counterparts, a…
Read more

Chelsea enter the race for Messi as a deal for Lukaku edges closer, while West Ham are up against Juve for Milenkovic, plus more.
Read more

Newark Mayor Ras J. Baraka announced last week that a statue of Christopher Columbus that was taken down last year in New Jersey's largest city will be replaced by a statue of abolitionist Harriet Tubman."Nearly on...
Read more

Senate Republicans are proposing emergency funding for the Capitol Police and National Guard amid a stalemate over a larger House-passed security bill.Sen. Richard Shelby (Ala.), the top Republican on the Senate Ap...
Read more

Wimbledon, England (AP) -- There will be a female chair umpire for the Wimbledon mens singles final for the first time in the...
Read more

After Christmas Fitbit sale: deals on the Fitbit Inspire...

We're rounding up today's best after Christmas Fitbit sales with deals on the Fitbit Inspire 2, Sense, and Charge 5.
Read more

Biden says it ‘remains to be seen’ if Ukraine...

Ukraine President Volodymyr Zelensky suggested his country would be joining NATO, but President Joe Biden said "school's out on that question."
Read more

Greetings, Quicktake readers! Want to track which countries win the most gold in Tokyo? Keep tabs on the latest results and medals won through the end of the Olympics on Aug. 8. Stream now for free.
Read more

Your Evening Briefing: Unused Covid-19 Shots Are Piling Up...

Hydro-Quebec Chief Executive Officer Sophie Brochu isn’t giving up on a transmission line to send carbon-free electricity from Canada to the U.S. Northeast, despite voters in Maine backing a move to halt the project.
Read more

Indigenous people are planning a protest over Amazon building a new headquarters on a heritage site in South Africa, ...
Read more

Wockhardt UK: Inside the factory making the AstraZeneca vaccine

BBC Breakfast has been given a world-first look inside the Covid vaccine factory Boris Johnson called "the saviour of humanity".
Read more

Why I quit an accountancy career to be a...

Caprice Roberts, now 25, was a trainee accountant at a top firm, when she made a huge career change.
Read more

About 20,000 households had a fourth night without power and say getting information is difficult.
Read more

Switch from AT&T or Verizon this month to Mint Mobile and this great prepaid carrier will gift you $25 of account credit on the house.
Read more

Biden replacing four Trump-appointed members of US Commission of...

President Biden is replacing four members of the U.S. Commission on Fine Arts that were appointed by former President Trump.Among the new appointees the White House ann...
Read more

Japanese soccer player Kumi Yokoyama said they are transgender — a revelation praised in the U.S. where they play in the National Women’s Soccer League but an identity not legally recognized in Japan.
Read more

Hospitals run low on nurses as they get swamped...

Right when the coronavirus is roaring back in the United States, hospitals across the country are running short of beds and nursing staff
Read more

Massachusetts Sen. Elizabeth Warren (D) says she will run for reelection in 2024.In an interview with Polit...
Read more

Bail has been denied for members of a pro-democracy group in Hong Kong that organizes the vigil for Tiananmen Square every year. Bail was denied by Judge Peter Law in the West Kowloon Magistrates' Court on Friday after members of the Hong...
Read more

England bowl West Indies out for 55 as they make a stunning start to their Men's T20 World Cup campaign with a six-wicket win in Dubai.
Read more

Several of these outside experts objected to the administration’s approach during a private, off-the-record call last week with federal health officials.
Read more

Robert Durst, the notorious subject of the HBO docuseries "The Jinx" and now a convicted murderer, was indicted Monday by a Westchester County, New York, grand jury for a separate murder charge in connection with his late wife's death.
Read more

Internet Explorer is still causing trouble, even from the...

A small portion of businesses still use Internet Explorer and the Magniber ransomware group is capitalizing on this.
Read more

Europe’s energy crunch is deepening, with gas and power prices hitting fresh records after the U.S. warned the continent isn’t doing enough to prepare for what could be potentially a dire winter.
Read more

Insider Q&A: Ex-biodefense chief on stopping the next COVID