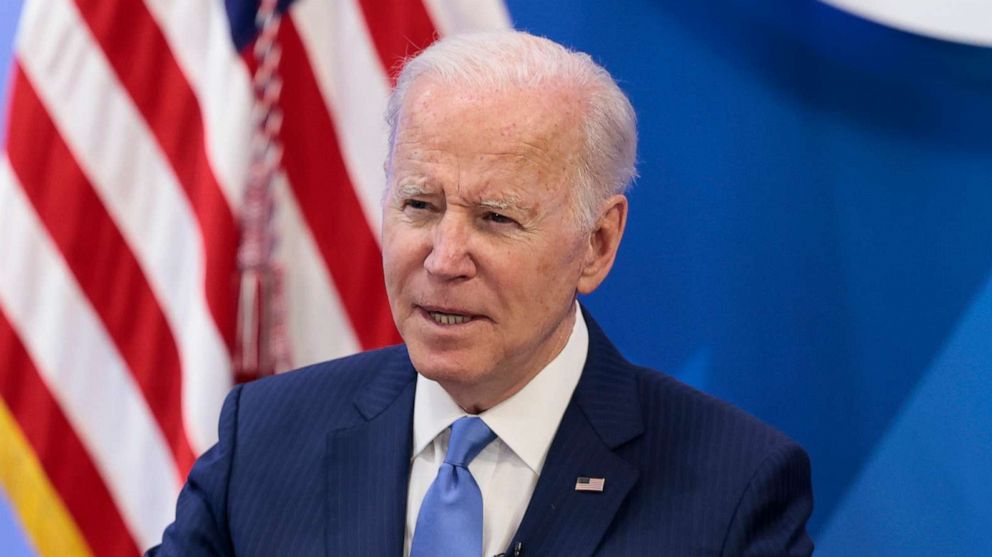 Biden, in a written statement, began with a caveat — lightly acknowledging the unprecedented nature of seeing a draft opinion before the court’s formal ruling — before launching into a three-part defense of Roe v. Wade by his administration.

“We do not know whether this draft is genuine, or whether it reflects the final decision of the Court. With that critical caveat, I want to be clear on three points about the cases before the Supreme Court,” Biden said in a rare statement on an even rarer event.

“First, my administration argued strongly before the Court in defense of Roe v. Wade,” Biden said, referencing oral arguments before the justices. “We said that Roe is based on “a long line of precedent recognizing ‘the Fourteenth Amendment’s concept of personal liberty’ against government interference with intensely personal decisions.”

“I believe that a woman’s right to choose is fundamental, Roe has been the law of the land for almost fifty years, and basic fairness and the stability of our law demand that it not be overturned,” Biden said.

He said his administration was already preparing for the outcome — but called on American voters to elect pro-choice candidates in November and on congressional lawmakers to codify Roe into law.

“Second, shortly after the enactment of Texas law SB 8 and other laws restricting women’s reproductive rights, I directed my Gender Policy Council and White House Counsel’s Office to prepare options for an Administration response to the continued attack on abortion and reproductive rights, under a variety of possible outcomes in the cases pending before the Supreme Court. We will be ready when any ruling is issued,” he continued.

“Third, if the Court does overturn Roe, it will fall on our nation’s elected officials at all levels of government to protect a woman’s right to choose. And it will fall on voters to elect pro-choice officials this November,” he said. “At the federal level, we will need more pro-choice Senators and a pro-choice majority in the House to adopt legislation that codifies Roe, which I will work to pass and sign into law.”

The document, which Politico said Monday night it obtained from a “person familiar with the court’s proceedings,” is marked “first draft” and dated February 10, 2022 — two months after oral arguments were heard in the case Dobbs v Jackson Women’s Health.

“Roe was egregiously wrong from the start,” writes Justice Samuel Alito, the opinion’s apparent author, in a copy of the draft posted online.

If Alito’s opinion were to hold, as written, it would dramatically upend abortion rights across America, effectively allowing each state to set its own policy.

“The Constitution does not prohibit the citizens of each State from regulating or prohibiting abortion,” the draft concludes. “Roe and Casey arrogated that authority. We now overrule those decisions and return that authority to the people and their elected representatives.”

The stunning leak comes as Tuesday marks the first multi-state contest of the 2022 midterm election season. Pat Carroll, voice of Ursula in ‘The Little Mermaid’,...

‘Gentleman Jack’ creator on the long-awaited return of the...

‘We don’t fear a referendum’

Donald Trump and Ivana’s Burial ‘Tax Break’—What We Do...

Boy, 16, dies after swimming in abandoned quarry in...

Bitcoin inches up above psychological threshold of $20,000

Can I Set Off 4th of July Fireworks Where...

We must abandon ESG policies in America and around...

Billy Long goes on tirade against Josh Hawley over...

Hurricane Blas heads out to sea off southern Mexico

Apple’s future MacBook could be one big (foldable) screen

Teachers push for return to remote learning as COVID...

Canon’s cheaper cameras could be in short supply for...