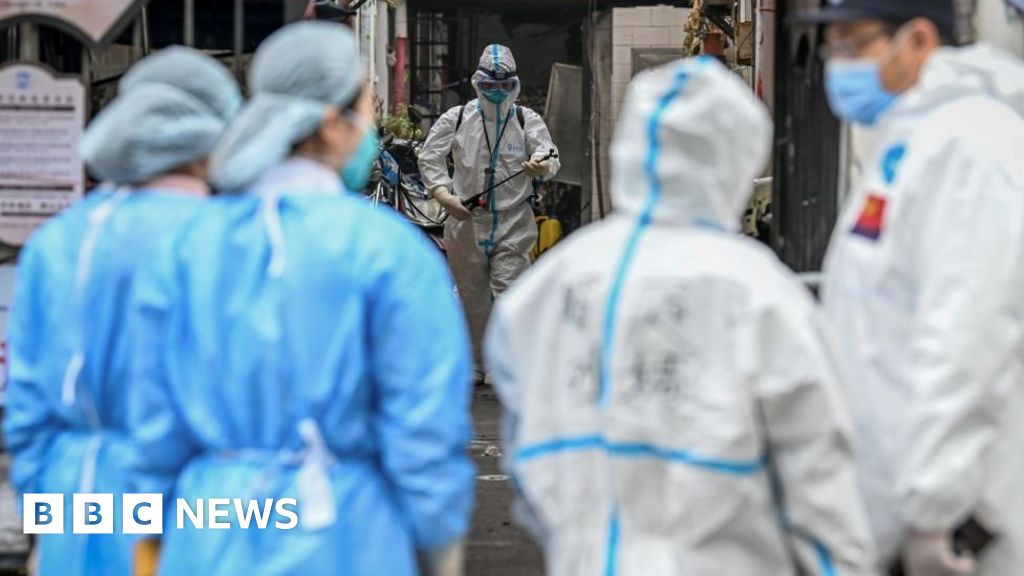 Image caption, Shanghai is now in its sixth week of restrictions aimed at curbing Covid cases

Chinese district authorities have fired four officials after an elderly patient from a Shanghai care home was believed to be dead and loaded into a hearse.

On Sunday, online videos emerged showing two people who appear to be mortuary workers placing the body bag into a vehicle.

The workers are later seen pulling the bag open, and one can be heard saying the patient is still alive.

The incident has sparked widespread anger on Chinese social media.

Officials in the Shanghai district of Putuo confirmed the incident late on Monday, adding that the patient had since been taken to hospital and was in a stable condition.

District authorities said five officials and one doctor were under investigation.

Four officials, including the deputy director of the local civil affairs bureau and the director of the care home, were fired. A doctor identified only by their surname Tian, also had their medical license revoked.

The patient’s identity is still unknown.

Many online condemned the incident, with former editor-in-chief of state news outlet Hu Xijing calling it a “serious dereliction of duty that almost led to death”.

Another commenter on social media site Weibo said it was a sign of the “chaos” happening in Shanghai.

Shanghai, China’s largest city and home to almost 25 million people, is now in its sixth week of restrictions aimed at curbing Covid cases, which began spiking again in March.

Most people are still banned from leaving their homes for any reason – Covid-infected and their close contacts are forced to go to a state-run quarantine centre. Video has emerged of clashes between police and people being forced out of their homes.

The BBC has previously reported evidence that authorities in Shanghai were struggling to deal with the outbreak.

China is one of the last remaining nations still committed to eradicating Covid, in contrast to most of the world which is trying to live with the virus.

But this zero-Covid policy has come under strain in recent weeks with the spread of the Omicron variant.

US on track to have record COVID-19 hospitalizations

What happens to Kevin McCarthy’s bid for Speaker now?

What to know about the suspected Russian spy ship...

PM Update: Temperatures are set to approach 100 this...

Why do quick-fix QBs like Russell Wilson, Matt Ryan...

Boaters who went missing on a fishing trip were...

‘Better than President Trump’: DeSantis’ clout swells in the...

A new electrolyte mixture may prevent EV batteries from...

‘Fire Emblem Engage’ is coming to Switch on January...

The scramble for rare earths, part 2

GitHub will require all developers to enroll in 2FA...

These are some of the strategies Chipotle, Disney, and...

Senator Tammy Duckworth calls on Congress to reinstate the...

Mervyn King Warns of Higher Taxes and Return to...

Homeland Security pleads with migrants to turn back in...

Dozens injured in clashes around Baghdad’s Green Zone as...

Putin’s Orthodox Christmas cease-fire begins, but Ukraine and its...

Analysis: The speaker fight is over but the chaos...

Perhaps faster delivery times were a poor choice from...

Peter Schiff trying to save Puerto Rico bank under...