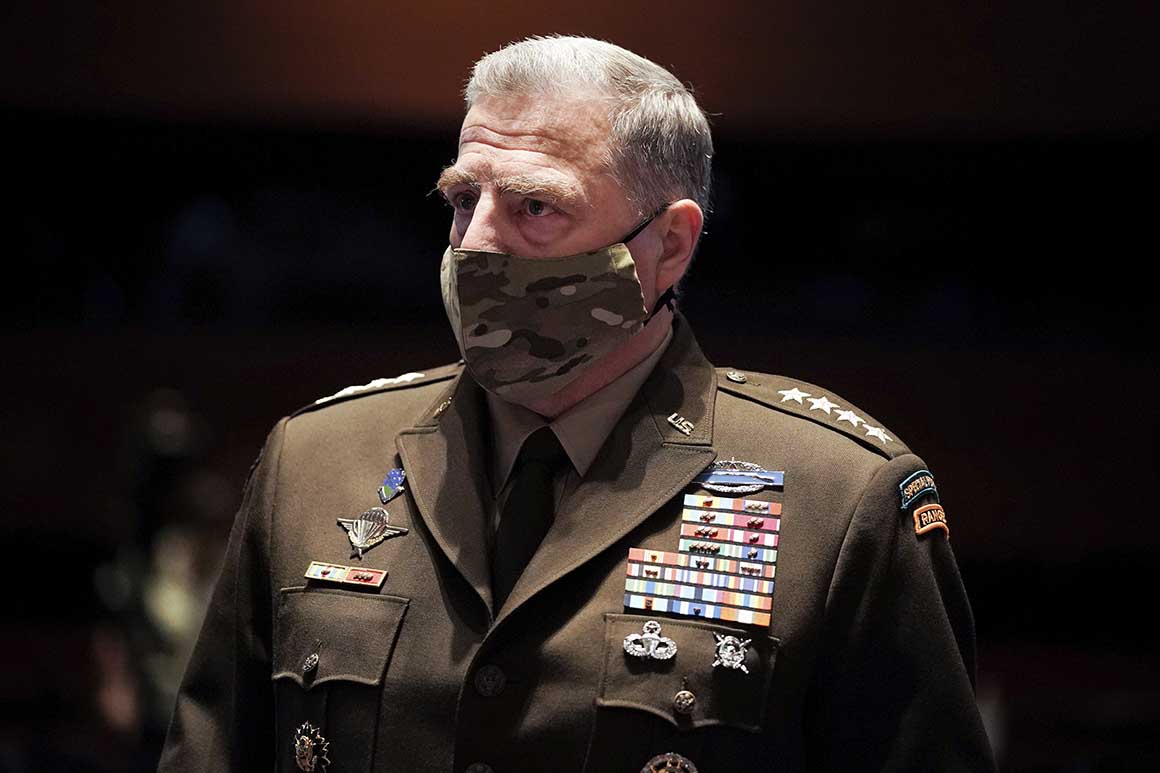 Asked whether he believes the Afghan forces can hold up under increased strain, Milley was noncommittal.

Which one of these options obtains and becomes reality at the end of the day? We frankly dont know yet. We have to wait and see how things develop over the summer.

He said there is at least still the possibility of a negotiated political settlement between the government in Kabul and the Taliban. This, he said, would avoid the massive civil war that some fear could happen.

Within about two months of the U.S.-led invasion in October 2001, the countrys Taliban rulers were removed from power and militarily defeated. But within several years, they had regrouped, rearmed and reasserted themselves, taking advantage of sanctuary in neighboring Pakistan. In recent years the Taliban achieved a battlefield stalemate with U.S.-supported Afghan government forces.

Milley noted that the Afghan military has operated in recent years with less reliance on U.S. and coalition advisers. Among the key exceptions are special operations commandos and the defense ministry.

But for the most part, theres no advisers out there anyway, he said in one of his few interviews since President Joe Biden announced April 14 that all U.S. military personnel will withdraw this summer. Milley said the commonly cited total of 2,500 troops rises to 3,300 if special operations forces are counted. Were taking it down to zero, he said.

After the withdrawal is over, the United States will provide unspecified capabilities to the Afghan military from other locations, Milley said. He did not elaborate on this, but other officials have said those over-the-horizon arrangements for supporting the Afghan military have yet to be solidified.

Milley said it is possible that the withdrawal will be finished before the Sept. 11 target date announced by the White House. He said that date reflects the estimated maximum amount of time needed to move all U.S. and coalition troops, as well as large amounts of equipment, out of the country.

I dont want to put precise dates on it, he said. Fantasy football tips for gameweek 19: How should you...

U.S. forces on Friday carried out a strike in Afghanistan against the terrorist organization believed responsible for the devastating bombing that killed at least 88 people near the Kabul airport a day earlier.
Read more

Want the lowdown on European markets? In your inbox before the open, every day. Sign up here. Gazprom PJSC said its meeting European demand...
Read more

Ghislaine Maxwell formally asked for a new trial after her lawyers raised concerns that at least one of the jurors who convicted her of sex-trafficking didn’t disclose during pretrial screenings he was sexually abused as a child.
Read more

House Democrats falling short yet again of leadership's publicly set goal to pass the bipartisan infrastructure bill is frustrating members of the party who see it as undermining the actual progress they've mad...
Read more

Celebrities speak out against anti-Semitism as tensions continue to...

Arlene Foster: Leadership of DUP hangs in the balance

The US president will warn that UK-EU negotiations must protect the Good Friday Agreement, his adviser says.
Read more

Black Brazilians demonstrated in the country's two largest cities on Thursday to protest against racism and police violence toward their communities in a local version of the Black Lives Matter movement in the United States, with some accusing the country's p…
Read more

Bombardier Inc. sold an additional $260 million of its 7.45% bonds due 2034 to an unidentified party in a move that will make it more difficult for creditors to trigger a default by arguing that the company’s divestitures ran afoul of investor debt protection…
Read more

From ‘bottom of totem pole,’ NBA begins its climb...

A career in the NBA seemed such an uncertainty as the 1950s arrived that Bob Cousy considered driving school a better option than playing for a team he didn’t even know how to find on a map.
Read more

Rep. Liz Cheney, the vice chairwoman of the House select committee investigating the January 6 insurrection, on Wednesday did not rule out the possibility of subpoenaing Kevin McCarthy for information the panel is seeking, suggesting the House's top Republica…
Read more

US official in Haiti apologizes for treatment of migrants

A top U.S. official has apologized for how Haitian migrants were treated along the U.S.-Mexico border, saying it’s not how border officials or the Department of Homeland Security behave
Read more

The rise of modern progressivism makes the most sense when we see it as an effort to legitimate failing institutions. The post Progressivism as Camouflage appeared first on The American Conservative.
Read more

A winter storm that hit the Midwest on Saturday made Chicago the worst place in the country for travelers.
Read more

The Latest: Germany faces ‘crisis of trust’ amid pandemic

Birth rates in the United States declined to an "unusually low" rate in the winter during the coronavirus pandemic, according to provisional monthly data from the ...
Read more

One of America’s largest universities cancels classes amid suicide...

Brooklyn Borough President Eric Adams is leading the field of Democrats vying to become New York City's next mayor ahead of Tuesday's primary, but ranked-choice voting means the race is far from decided....
Read more

US Surgeon General Dr. Vivek Murthy stressed Tuesday that parents need to recognize that "Covid is not harmless in our children" after actor Matthew McConaughey said his kids aren't vaccinated and that he's against mandating vaccines for children.
Read more

00:00Start today. Once again on Capitol Hill and Democratic attemptsto get their act together with Washington correspondent Joe Matthew host of Sound on...
Read more

A program that primarily funded highways during the Trump administration has pivoted away from roads in its new disbursement, marking a potential shift in infrastructure spending.
Read more

Protesters gather for a second day at a school where an image of the Prophet Muhammad was shown.
Read more

On The Money — Budget analysts caught in a...

India’s economy grew by 20.1% in the April-June quarter from the same period a year earlier, when it suffered a record contraction, raising hopes of an economic recovery
Read more

Officers are seen talking to each other and restraining 14-year-old sister of Tamir Rice, 12, as he lied bleeding. Dean Reynolds reports.
Read more

Durst faces day of reckoning in murder of best...

Czech president to swear in new government on Friday

Alaska Airlines brings back food, beverage service on some...

Georgia hate crimes law could be used in spa...

The deadly spa shootings in Georgia could be the first time a new hate crimes law is used in the state. Kate Brumback, a reporter for the Associated Press, joined CBSN's Tanya Rivero with more on what this could mean.
Read more

Trump campaign chaos is nothing new

Donald Trump's campaign destabilization is making headlines this week, but John Dickerson says the campaign has been in that state for awhile. The CBS News political director and host of "Face the Nation" joins CBSN to talk about how the campaign is running o…
Read more

Omar: Manchin’s excuse for not supporting Build Back Better...

Rob Burrow hears a moving message from his daughter

Kate Mitchell, a British national who worked for BBC Media Action, is found dead in the capital Nairobi.
Read more

Liverpool say they have "collected substantial evidence" after Manchester City made a complaint alleging a home fan spat at a member of their staff.
Read more

Indian police said on Saturday they had charged senior executives of Amazon.com's (AMZN.O) local unit under narcotics laws in a case of alleged marijuana smuggling via the online retailer.
Read more

Dozens of people were killed in attacks on government buildings.
Read more

The president has been working to bring together a divided Democratic Party on social spending, but in the CNN event he spotlighted the two main holdouts.
Read more

Pakistan’s communications regulator blocked social media sites for at least four hours on Friday without prior warning, in an unprecedented move aimed at countering fallout from protests by a radical Islamic group.
Read more

Instagram Lite reboot squeezes the app into a 2MB...

Facebook is today relaunching Instagram Lite, a stripped-down version of the image-sharing app designed for users in emerging markets. Developed by Facebook’s team in Tel Aviv, the birthplace of Facebook Lite and Messenger Lite, the app’s package size is just…
Read more

The man said he has no intention of removing his banner and that he can easily pay the fine. He also said the sign may refer to someone other than the former president.
Read more

Flights with Australia will not be suspended as there appears to be no link to the travel bubble.
Read more

Greene: McCarthy ‘doesn’t have the full support to be...

For one thing he hasn’t messed up yet.
Read more

About 100 people are moved from the hotel and nearby buildings after a suspect package is found.
Read more

If successful, it will be the farthest any civilian has traveled from Earth.
Read more

With simplicity central to platform success, how can payments help drive user experience for both customers and merchants?
Read more

Florida police admit they made mistake while monitoring Brian...

Florida police on Monday admitted they made a mistake last month when they lost track of Brian Laundrie, Gabby Petito's boyfriend and a person of interest in her death.The North Port Police Department (NPPD) ...
Read more

Arsenal manager Mikel Arteta confirms Pierre-Emerick Aubameyang will be available for selection again after being dropped against Spurs for a breach of pre-match protocol.
Read more