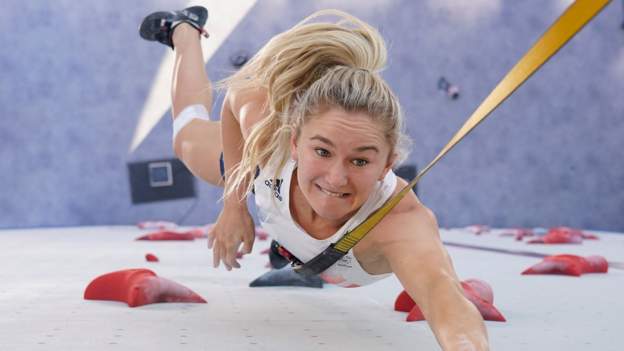 Coxsey missed out on a medal at the Tokyo Olympics

Britain’s most decorated elite climber Shauna Coxsey has defended her decision to continue the sport while pregnant.

The 29-year-old, who retired from competitive climbing after the sport’s Olympic debut in Tokyo, is 38 weeks pregnant with her first child.

But her choice has led to some criticism on social media.

“Everyone assesses risk differently and I think people perceive me climbing as risky when I am actually climbing so well within my comfort zone,” she said.

Speaking to Radio 5 Live, she added: “It feels way more risky for me to walk down the street. I feel much more likely to trip over on a bumpy road than I do to go up an easy climbing wall.”

Coxsey created history in Tokyo as Britain’s first competitor in the sport and finished 10th overall after being hampered by a back injury.

The double World Championship bronze medallist has been involved in the sport since she was three years old.

“If I don’t climb for a week or so, my body feels quite clunky and everything gets a bit achy,” she added.

“As soon as I get back on that wall and start stretching and moving again, my body feels more connected and good and strong and also my mental health as well.

“I can’t imagine stopping if I didn’t need to and I haven’t needed to and it feels great. I’ve been really fortunate.

“I wouldn’t put my baby in danger. People think I might be able to fall and land on my stomach – which is something I have never ever done or seen happen before.

“For me to share a bit and communicate how I have gone about this pregnancy and say it is possible to keep climbing in a safe way has been really important.

“It’s frustrating that other women are getting this judgement and choosing to give up something that they love and are comfortable with because of the fear of judgement.

“It is such a sad position to be in – it is bullying.”

Abortion reversal pills: The latest front in the social...

Boxing champion belt given to Mandela stolen in South...

England fight back in Ashes test before rain plays...

FTX founder Sam Bankman-Fried says he was “shocked” at...

Pop-up Covid testing sites may be rife for identity...

How the Vikings made a key offensive adjustment, and...

Mercedes’ future vehicles will have Luminar lidar under new...

Metallica ‘blown away’ by pivotal use of ‘Master of...

EU’s full ban on Russian coal to be pushed...

North Finchley: Man who was fatally stabbed in street...

The presidential ties that bind

Yankees, Mets have New York in a baseball state...

Your pictures on the theme of ‘urban landscape’

A big union rally to protest benefit hikes, minus...

El-Erian Says US Inflation May Well Reach 9% in...

Breaking: One student shot outside Grant High School in...

Queen Elizabeth’s Doctors Are Concerned for Her Health

Everything to Know: MLB All-Star Week

Salesforce is getting into bed with WhatsApp

Twitch is adding a ‘charity mode’ that simplifies streaming...

Why is the ocean salty? Why the world’s biggest...