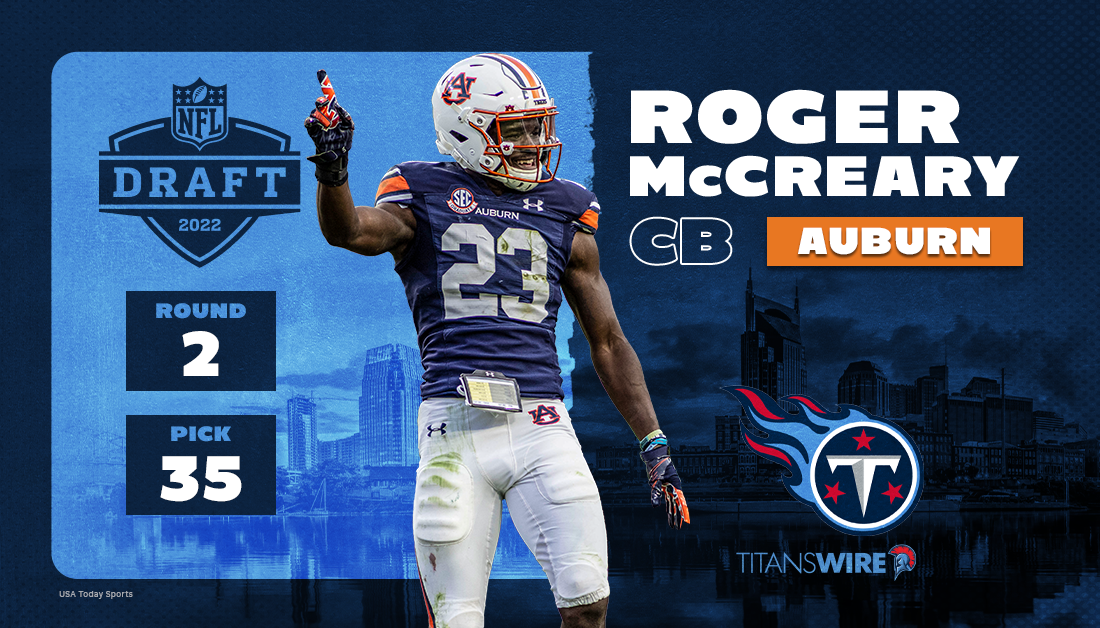 The 2022 NFL draft will forever be an unforgettable one for Tennessee Titans fans everywhere.

The entire fanbase had their hearts instantly ripped out following the trade of superstar wide receiver A.J. Brown, which was a shocking start to the draft.

However, it was also bittersweet, as at least the Titans were able to bring in even more young talent because of the trade.

Losing Brown hurts, and anyone who says otherwise is either hurting or in complete denial. This will be something that the franchise will have to live with if Brown goes on to have a Hall-of-Fame career, in which the Titans will now merely be a footnote in rather than the primary memory of his career.

Those trades had a drastic impact on the first two days that saw the Titans draft their franchise wide receiver in Treylon Burks, a cornerback in Roger McCreary, a left tackle in Nicholas Petit-Frere, and then a quarterback of the future in Malik Willis, who the Titans selected after moving up to No. 86.

My favorite part about those first four picks is they are all considered premium positions in this modern era of football.

Burks is a fantastic wide receiver who has star potential at the next level due to his elite body control for his size.

The Arkansas product is big, smooth and natural in everything he does, while also possessing the versatility to operate from wherever you want.

Burks ability to run after the catch is also something to behold due to his rare blend of size, speed, power, and physicality with the ball in his hands.

Drafting a cornerback in Round 2 may have been the only pick that wasnt considered a position of need, especially with a premium pick. Tennessee must have felt that the value of McCreary at a booming position like cornerback was too good to pass up, and its easy to see why.

Roger McCreary did a good job at covering JaMarr Chase during their 2019 matchup.Some of the incredible plays they made on him that day was simply because its Joe Burrow and JaMarr Chase.

Roger McCreary definitely got his as well though.#Titanspic.twitter.com/34VfX06iN9

Their third-round picks, Petit-Frere and Willis, are more upside picks than NFL-ready ones, but the endless possibilities of what both could become with their physical traits is truly an exciting thought.

Anchor is the big focus here, hand placement is good, gets to the inside and maintains the block while locking in his lower body. Shows he can bend in his upper body to prevent movement.pic.twitter.com/EpO3Shr01l

With Willis in particular, this is the definition of low-risk, potentially high-reward selection, except calling it a high reward would be tremendously underselling it.

A quarterback with Malik Willis physical tools has never been available at the draft discount the Titans just received.

What an incredible steal there is zero downside here.pic.twitter.com/xWcZamyeXI

At worst, Willis remains a backup for the duration of his contract and Tennessee finds its franchise quarterback elsewhere with minimal financial repercussions for missing on the Liberty quarterback.

Ideally, Willis hones in all that undeniable talent in a year or two and becomes the modern-day franchise quarterback for the Titans who can go toe-to-toe with the leagues elite.

I was also a big fan of the Titans Day 3 picks.

Hassan Haskins and Chigoziem Okonkwo in Round 4 are two players I really liked especially the Maryland product because tight ends were flying off the board and he was the last available of all my personal favorites at that position.

Kyle Phillips in Round 5 is a sneaky acquisition that I loved at that point in the draft. I had Phillips as one of the better slot receivers in this draft and thought he was bound for the fourth round at worst.

Alas, he was there in Round 5 and the Titans smartly pounced on someone who will be adding crafty and refined route-running to the receiver room.

Both will have the chance to immediately contribute on special teams while also adding valuable depth to an already stout defense.

In conclusion, I really love the draft class as a whole. This really could be a group that provides several building blocks and eventual franchise pillars.

Having said all that, I cant give any draft that involved trading a franchise wide receiver an A, so I will go slightly below that.

In case you missed the analysis and grades we gave for each individual pick, you can check those out below.

Instant analysis and grade for Titans’ selection of Treylon Burks House to vote Thursday on bill to cap cost...

Cathie Wood’s ARKK Is on the Verge of Taking...

Helen Mirren on Adding Another Queen to Her List...

Meet the fintech taking on legacy technology in the...

How to connect AirPods to your iPhone, Mac, Apple...

3 indicted in fire at Wendy’s after Rayshard Brooks...

Christie to stump with Kemp next week as Georgia...

David Sedaris on coming out, all over again

‘He was curious about the world’: Friends remember American...

Don’t forgetNetflix also made the worst movie of the...

Israel’s Melio to integrate payments platform with Capital One...

Russell Wilson’s top priority? Keeping the Broncos out of...

The Morning After: Apple may have hired a longtime...

Carjacking victim killed after being dragged by vehicle during...

Average long-term US mortgage rate back above 7% this...

Wine tasting in Napa and a staff revolt: How...

Here’s What Happens When Countries Use Bikes to Fight...

2 people were struck by lightning outside a spring...

How you can maximize Social Security benefits with this...

Inside the White House gun violence initiative they say...

Will Newcastle turn the ‘big six’ into ‘big seven’?

Dozens feared dead after ship sinks in storm off...

Airlines rush to scrap or change flights to U.S....

Roe v Wade: Why this is a seismic day...

Ukraine tensions: After eight years of war, an eastern...

Three Wise Men: Men Can Be Vulnerable, Too