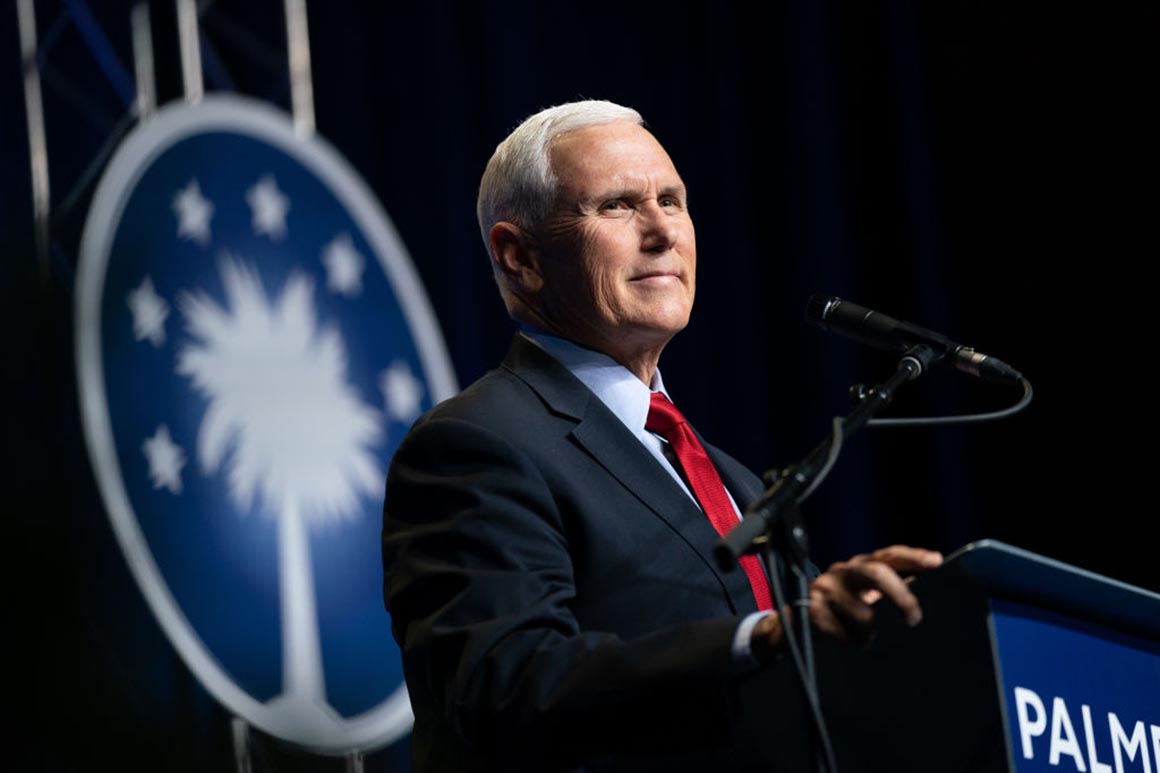 Pence touted a variety of their administrations accomplishments, from conservative judicial appointments and the Operation Warp Speed vaccine program, to foreign policy achievements like the Abraham Accords.

Pence called serving alongside Trump the greatest honor of my life. He made a passing reference to the events on Jan. 6, calling it a tragedy at our nations Capitol, but didnt address the violence that occurred.

During his speech, which coincided with President Joe Bidens 100th day in office, Pence labeled Bidens agenda an explosion of runaway spending and decried Democrats for what he viewed as launching a war against American traditional values. He said Republicans had the winning agenda, focusing on key issues such as national defense, a secure border and conservative judges.

Pence did not say whether he would run for president in 2024, but the location of the nights event was notable. South Carolina hosts the first presidential primary in the South, and a win in that state resuscitated Bidens flagging campaign to be the Democratic nominee last year.

His remarks revealed that he was willing to squarely align himself with the former president, even in the face of reports that their relationship had deteriorated in the aftermath of the Capitol insurrection, where rioters were recorded yelling, Hang Mike Pence!

However, earlier Thursday, Trump told Fox Business that he would certainly consider Gov. Ron DeSantis of Florida as a running mate if he were to run again the latest sign of a fracture between Trump and Pence.

Last month, a poll of Republican voters found that DeSantis and Pence were tied for the 2024 GOP nomination if Trump decided to opt out.

This month, publisher Simon & Schuster announced a two-book deal with Pence a common tactic for those prepping a presidential run. The first book, an autobiography focusing on the former vice presidents faith and public service, is expected to land in 2023. A "self-portrait" by humanoid robot Sophia, who "interpreted" a depiction of her own face, has sold at auction for over $688,000.
Read more

Tasmanian Devils have been born in the wild of the Australian mainland for the first time in more than 3,000 years.
Read more

Daimler AG and Jaguar Land Rover became the latest carmakers to warn of crimped sales as a result of the global semiconductor shortage, with the latter flagging deliveries in the second quarter will be 50% worse than initially thought.
Read more

A Skoda Fabia, driven by Joshua Parkes ploughed through a lamppost and hit a tree, an inquest hears.
Read more

Amy Hart tells a House of Commons inquiry on influencer culture that social networks should do more.
Read more

Taylor Swift dropped a rerecording of her 2014 hit single “Wildest Dreams” on Friday, part of an effort to gain control of her older work amid a feud with music manager Scooter Braun.
Read more

The inflation rate hit 2.5% in June, exceeding the Bank of England's target for a second month.
Read more

Christina Aguilera on Spears conservatorship: ‘The most depleting, devastating’...

Pop superstar Christina Aguilera on Tuesday condemned the conservatorship of Britney Spears slammed the situation as "the most depleting, devastating and demeaning thing imaginable."Sharing a photo of herself and S...
Read more

Speaker Nancy Pelosi (D-Calif.) on Sunday said the Trump administration's subpoenas for data on accounts belonging to at least two House Democrats "goes even beyond Richard Nixon.""In terms of the data mining, what...
Read more

While supposedly the leading next-generation currency, the great irony about Bitcoin is that it’s shockingly retrograde in almost every way that matters. To start with, “manufacturing” the cryptocurrency has required burning lots of coal, leaving a massive ca…
Read more

The U.S. called on China to halt its “provocative” pressure on Taiwan after a record number of daily incursions by Chinese warplanes, saying the military actions are destabilizing and risk leading to “miscalculations.”
Read more

Francis Lun on the Markets (Radio)

Nobel peace laureate, Malala Yousafzai was shot in the head by the Taliban in 2012.
Read more

"The View" co-host Whoopi Goldberg will stay with the show for at least another four years.Goldberg, who has been a mainstay on the daytime political news talk show for 15 seasons, has inked a four-year deal that w...
Read more

Every county in Florida and Arkansas is currently registered as having "high" levels of community transmission of COVID-19, ...
Read more

Los Angeles police shot and killed an armed suspect and rescued a hostage Friday after the suspect pointed his weapon at the victim’s head, police said.
Read more

A Moscow court on Wednesday night outlawed the organizations founded by Russian opposition leader Alexei Navalny by labeling them extremist, the latest move in a campaign to silence dissent and bar Kremlin critics from running for parliament in September.
Read more

‘Entourage’ creator: HBO not promoting show due to ‘wave...

The creator of the HBO series "Entourage," which ran from 2004 to 2011, says streaming service HBO Max is refusing to promote old episodes of the show due to a "wave of righteous PC [political correctness] culture."...
Read more

On The Money: Biden celebrates relief bill with Democratic...

Happy Friday and welcome back to On The Money, where we're calling on Barack Obama to expose the worst ...
Read more

Tropical Storm Nicholas is expected to bring strong winds and heavy rainfall to the Texas coast Monday before moving on to Louisiana.The southern part of Texas' coast is under a tropical storm warning issued by the...
Read more

Three people were arrested in Egypt for disposing of thousands of doses of COVID-19 vaccines without authorization, ...
Read more

Germany's health minister Jens Spahn on Wednesday laid part of the blame for the killing of a gas station attendant by a man who refused to wear a face covering on "incitement" and "hatred" of government policies posted o...
Read more

Doug Beattie has called on the DUP and Sinn Féin to ensure the executive does not collapse.
Read more

For the first time in over 30 years, NASA will be sending missions DAVINCI+ and VERITAS to Venus, an expedition expected to launch in the late 2020s.
Read more

"Our election system is secure, and today's charges demonstrate that in the rare circumstances when fraud occurs we catch it and hold the perpetrators accountable," a statement said.
Read more

Moment when European Commission President left without seat during...

After European Council President Charles Michel left his colleague, European Commission President Ursula von der Leyen, without a seat during a meeting, a group of women leaders have urged him to resign. The group said the chair snub was a "trap" set by Turki…
Read more

Defense Secretary Lloyd Austin's decision to require the COVID-19 vaccine for all military personnel is shaping up to be a major test of his leadership that risks souring his relationship with the rank-and-file....
Read more

"The US should send 240 servicemen publicly, in US military uniform, and make public where they are stationed," the editor-in-chief of the paper said.
Read more

How a Long Island Man Became the ‘Forrest Gump...

What Bryant Neal Viñas can teach us about the lessons from Afghanistan the U.S. still hasn’t learned.
Read more

The Centers for Disease Control and Prevention (CDC) documented a significant drop in routine child and adolescent vaccinations across 10 jurisdictions in the early months of the coronavirus pandemic, spurring concerns of potential outbreaks of vaccine-preven…
Read more

Siti Sarah Raisuddin never got to hold her newborn son, who was delivered via a three-hour surgery.
Read more

Dr. Scott Gottlieb, the former FDA commissioner, says "I think we are seeing a hopeful trend across the country" as hospitalizations and deaths are down from COVID-19.
Read more

What will a Trump presidency mean for U.S.-Israel relations?

Nicola Sturgeon's sister Gillian was arrested along with a man over an alleged domestic incident in North Ayrshire.
Read more

Ole Miss head coach Lane Kiffin made a recent appearance on the "Dan Patrick Show" and talked about the vacancy at the University of Southern California, but added that he intends on staying at Ole Miss.
Read more

Saturday’s “SNL” drew a 3.5 household Live+Same Day rating in the 44 metered local markets and a 1.5 among adults ages18-49 in the 25 markets with local people meters.
Read more

Watch: George Floyd one year on – how sport...

One year on from the murder of George Floyd, BBC Sport looks back at how the sporting world has taken a stand against racism in the past 12 months.
Read more

‘Made in America’ relies on our global connections

Ally Financial is ending overdraft fees entirely on all of its bank products, the company said Wednesday, becoming the first large bank to end overdraft fees across its entire business
Read more

UK communications regulator will take a look at the rules.
Read more

Target dates for ending Covid restrictions are announced in England and Scotland, but not Wales.
Read more

The billionaire dynasty behind Selfridges & Co. is considering a 4 billion-pound ($5.66 billion) sale of the British department store group following an approach from a potential buyer.
Read more

Pixel 6 could get a new, better version of...

A new Google Translate interface has been spotted, but it might be exclusive to the Pixel 6 range.
Read more

A fairy tale in Denmark: How an unforgettable night...

How an emotional night in Copenhagen unfolded as Denmark reached the last 16 of Euro 2020.
Read more

Biden-Putin summit: US and Russian leaders set for tense...

The first meeting between the leaders comes as relations between the US and Russia are at rock bottom.
Read more

Could a reboot make social media a nicer place?

Couple hopeful for children’s future after escape from Kabul

Attorneys representing Zane Michael Floyd asked a judge to allow enough time to investigate the effects of the untested sequence of drugs that prison officials want to use to execute him.
Read more

U.S. gymnast Simone Biles's decision to pull out of the team competition at the Olympics due to mental health issues shocked Americans who were expecting to see the world champion snag as many as six gold medals at the Tokyo Games.But health...
Read more

The rule will require power plants in the 12 states to optimize their use of already-installed pollution controls for 2021.
Read more

The tag line for the latest biopic about an American icon reads: “Find out what it means.”
Read more

Austin repeats ‘ironclad support’ for Israel in conflict with...

Defense Secretary Lloyd Austin on Wednesday called his Israeli counterpart to stress the United States' "ironclad support" for Jerusalem's right to defend itself in the midst of a military conflict with Hamas,...
Read more

CAMPBELLS MAYORAL MOMENT City CouncilorAndrea Campbell is having a moment in the Boston mayors race. Now she needs to turn that buzz into...
Read more

The first gold medal of the 2020 Tokyo Olympics has now been won.
Read more

Since January, there have been more than 100 reported cases of a fungal "superbug" in both Dallas and Washington, D.C. The fungus, known as Candida auris, attacks people with weakened immune systems and can be drug-resistant. Dr. Amesh Adalja, an infectious d…
Read more