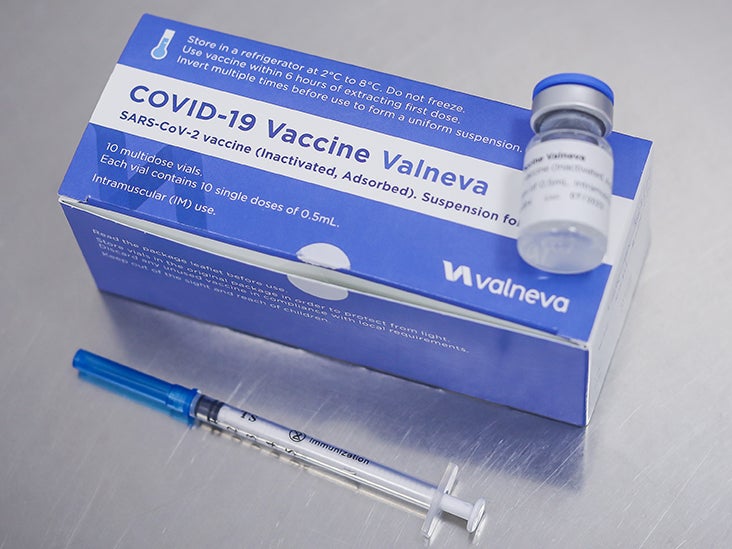 VLA2001, a new COVID-19 vaccine developed by Valneva, a French biotechnology company, using traditional methods, has now received conditional marketing authorization in the United Kingdom. Could it prove more acceptable to the vaccine hesitant, be more effective against new variants, or improve the situation in low-income countries? Medical News Today looks at the evidence.

With more than 6.2 million deaths and close to 510 million cases confirmed worldwide by the World Health Organization (WHO), COVID-19 has wrought a heavy toll.

In high-income countries, such as the United States

and the United Kingdom

, although case rates remain high, vaccination has been effective in reducing hospitalizations and deaths.

Around the world, COVID-19 vaccines have been and are being authorized. Across European countries, five vaccines have gained use authorization: Pfizer, Moderna, Oxford-AstraZeneca, Johnson & Johnson (Janssen), and Novavax.

, Pfizer, Moderna, and Johnson & Johnson have so far received authorization or approval for use.

Now, the U.K. Medicines Regulatory and Healthcare Products Regulatory Agency (MHRA) has granted regulatory approval for the use of a new COVID-19 vaccine, developed by the French biotechnology company Valneva.

This vaccine, VLA2001, uses a method that may be considered more traditional

as used in vaccines for polio, hepatitis A, rabies, and influenza.

Valneva, like other COVID-19 vaccines such as Sinopharm, uses inactivated whole virus particles of SARS-CoV-2, as well as adjuvant substances.

An inactivated virus cannot replicate and cause disease, but e

that causes COVID-19, as it happens with other types of vaccines.

The MHRA granted conditional marketing authorization for the Valneva vaccine on April 14, 2022, for adults aged 18-50 the first European country to do so.

Bahrain gave it emergency use authorization in March, and the vaccine is undergoing regulatory review by the European Medicines Agency (EMA).

Some phase 1 and 2 trials and one phase 3 trial have been completed, but the results have yet to be peer-reviewed. The MHRA approved the vaccine on immunobridging data data measuring immune markers to infer vaccine efficacy rather than results of clinical trials in volunteers.

The phase 1/2 trial whose data has been published had only 153 participants, but the results were encouraging. Participants experienced only mild side effects localized tenderness and soreness at the injection site, headache, or fatigue in around half of the recipients and immune responses were good.

Valneva has reported immune responses comparable to existing vaccines and few side effects in its phase 3 trial, which involved

4,012 participants.Prof. William Schaffner, professor of infectious diseases at the Vanderbilt University School of Medicine in Nashville, TN, told Medical News Today he was nevertheless cautious about the new vaccine:

There are some other protein-based whole-cell-like vaccines that have been made in the traditional way, such as the Chinese vaccine [Sinopharm], that, although they are effective, havent been quite as effective as the mRNA vaccines. So well have to see.

The five already-authorized vaccines have been effective in reducing the toll of COVID-19, so what does this new vaccine add?

Some people are hesitant about the existing COVID-19 vaccines because of their rapid development and especially the new mRNA technologies used in the Pfizer and Moderna vaccines.

Because Valneva uses inactivated whole-virus particles, in common with many familiar vaccines, might people be more willing to accept it?

It might attract some [vaccine-hesitant] people because it is a very traditional technology, but I dont think it will be, as we say in the U.S., a game-changer.

High-income countries already have a good vaccination coverage, so it is unlikely to make a great difference there. However, the Valneva vaccine has one big advantage over the mRNA vaccines.

It can be transported easily and stored at normal fridge temperatures, which could help worldwide vaccine rollout, as Prof. Schaffner confirmed.

Even in [low-income] countries they have cold chains that are used to these temperatures, which would make it much more readily transportable in challenging environments, he told us.

Some experts have suggested that a vaccine using the whole virus may be more effective against new variants, as Prof. Eleanor Riley, professor of immunology and infectious disease at the University of Edinburgh, notes:

One particular advantage of the Valneva vaccine is that it is made up of the whole SARS-CoV-2 virus, not just the spike protein. This means that it will induce antibodies and T cell cells against many different components of the virus, including components that are much less susceptible to variation than the spike protein. It is possible, therefore, that this vaccine may provide better protection against new variants as they arise.

So, the Valneva vaccine is a useful addition to the armory of vaccines available against COVID-19, and could have a significant impact if licensed for use in low-income countries.

But, even if the EMA approves it, it seems unlikely that this vaccine will be a game-changer in those countries that have already achieved a high level of vaccination. Thai garment workers win $8.3M in back pay after layoffs

Clinton on possible Roe v. Wade reversal: “You have...

As Russian rockets rain down on Kharkiv, its paramedics...

Why the iPhone 14 Pro will finally upgrade to...

The Last of Us PS5 remake could release this...

Spirit to double pay for flight attendants through Jan....

French elections: Macron and Le Pen to fight for...

The Pentagon is working on an algorithm to detect...

Psaki: Student loan borrowers likely to have to pay...

Scottish Premiership: Who is your club’s player of the...

Rangers hold talks with SFA after complaining about referee...

Netflix confirms the end of Top Boy after one...

Elon Musk not expected to testify in Johnny Depp’s...

Abortion providers to meet with Kamala Harris virtually at...

Russia and Ukraine to start next round of live...

A week after Bronx fire, families to bury their...

Racism in football: ‘Hate alive and well’ in game...