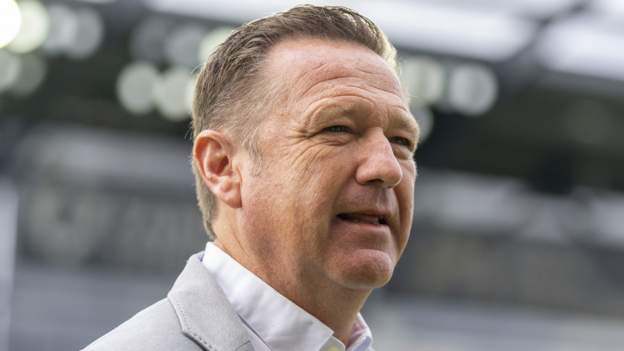 National Women’s Soccer League (NWSL) side Houston Dash have suspended head coach James Clarkson as part of an investigation into “current and historic complaints of discrimination, harassment and abuse”.

His suspension was recommended by the league and its players association.

The Dash say they will await the final report before deciding his future.

A number of coaches in the league have been sacked or resigned following allegations of misconduct by players.

The Englishman was sacked in September following allegations of sexual misconduct by more than a dozen players. He denies the claims.

Richie Burke, the coach of the Washington Spirit, was then fired after claims of harassmentexternal-link

amid similar allegations. Both men have denied the claims.

Clarkson was appointed head coach in 2019 and previously served as the academy director for the men’s side. The club say they will appoint an interim coach in the coming days.

“As an organisation, our highest priority is creating and maintaining a safe and respectful work environment for our players and staff, which we believe is critical to our success on the pitch,” the Dash said on Wednesday.

“The club has made counselling services available to all members of the organization interested.”

from the NWSL and the players association recommended for Clarkson to be “suspended immediately” pending the conclusion of the investigation.

“Players made a promise to ourselves and future generations to transform our league – not through words, but with our actions,” Meghann Burke, the executive director of the players association, said.

“This shows that our joint investigation is doing the work of systemic transformation.”

The NWSL, US Soccer and world football governing body Fifa are conducting separate investigations into the allegations.

A husband’s love for his wife lives on in...

Banksy: The stories behind his ‘Great British Spraycation’

Fishing feud at end of the world split US...

In Florida, both sides in abortion fight wait to...

India bourse head was a ‘puppet’ of unnamed yogi,...

Woman Slammed for Demanding Breast Milk From Her Sister

GOP governor debate, ‘hellhole’ and all

What next for the UK after remarkable election results?

77 years after battle’s end, Okinawa wants US base...

Glencore Takes Heat in Quebec for Smelter That Spits...

Truss Hints at Money Target for BOE if She...

Indian evacuee: The kindness of Ukrainians saved my life

Jan. 6 committee has outtakes of Trump’s message to...

Ms Marvel: ‘I felt I belonged on set’

Warren tries to 'light the fire of urgency' for Democrats