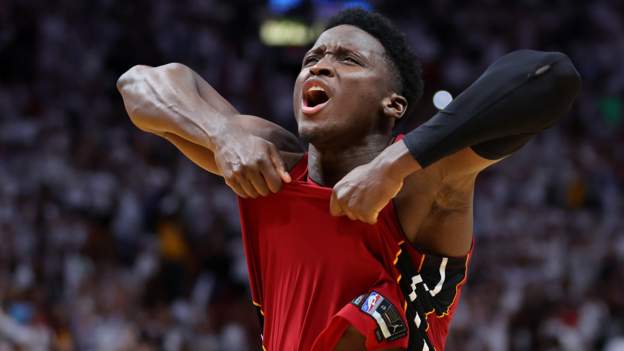 The Miami Heat clinched their spot in the NBA Eastern Conference semi-finals after beating the Atlanta Hawks despite missing key forward Jimmy Butler.

It secured a 4-1 win for the Heat in the best-of-seven first-round play-off.

“We clearly had some adversity in this game not having Kyle or Jimmy, and our group doesn’t even blink,” Heat coach Erik Spoelstra told ESPN.

“That’s not even something we have to address. We just pivot and put in the game plan and everybody gets ready and tapes their ankles and gets out there and competes.

“Everybody that played had their fingerprints on this.”

Miami will play the winner of the Philadelphia 76ers and Toronto Raptors, with the Sixers leading 3-2 in their first-round series.

The Heat will have at least six days off before the second round begins – on Monday at the earliest – and will be hoping Butler and Lowry will be fit to return.

Butler, a six-time All-Star, had averaged 30.5 points, 7.8 rebounds and 5.3 assists in the series but was ruled out of the fifth game because of right knee inflammation.

In his absence, Victor Oladipo scored 23 points after fighting back from his own injury problems.

Oladipo, 29, said a year ago he was at “the lowest point” after knee and quadriceps injuries, but starred by leading the scoring for the Heat in his first play-off start since August 2020.

After the Hawks recovered to 79-76 with eight minutes and 14 seconds remaining, Oladipo posted seven of Miami’s next 13 points as they moved clear at 92-82.

Atlanta fought back and had a couple of chances to level in the final 30 seconds, but a missed shot came before a game-ending steal by Bam Adebayo.

In the Western Conference, the Memphis Grizzlies took a 3-2 lead over the Minnesota Timberwolves with a 111-109 victory.

Ja Morant – recently crowned the 2021-22 NBA Most Improved Player – scored 18 of his game-high 30 points in the fourth quarter, netting the Grizzlies’ final 11 points which included a tie-breaking lay-up in the final second.

The Phoenix Suns also edged 3-2 ahead after five games of their first-round series against the New Orleans Pelicans thanks to a 112-97 home win. Dutch rail strike halts trains to and from Amsterdam

EXPLAINER: A look at toughest US sanctions facing Russia

Retired US major general: What it will take for...

Charles to Be Proclaimed King in Ceremony at Cardiff...

Many baffled by Taliban reneging pledge on girls’ education

Williams retirement on hold after win over world number...

The Psychology Behind the Market Selloff

A new Bureau of Prisons director gives administration a...

Beaver Walks Into Bar, Stunning Patrons as It Heads...

Manipulating Your Dreams for Self-Improvement—or Profit

What Khloe Kardashian Has Said About Having Another Baby...

Man hailed as Safeway shooting hero had criminal past

They moved to Highland Park for the schools, the...

Laura Ingraham: Americans need to see China for what...

New Eli Lilly Antibody Cleared by U.S. for Use...

See Halle Bailey as Ariel in The Little Mermaid

Jon Batiste on the healing power of music and...

Almost 150 crimes committed against media by Russia during...