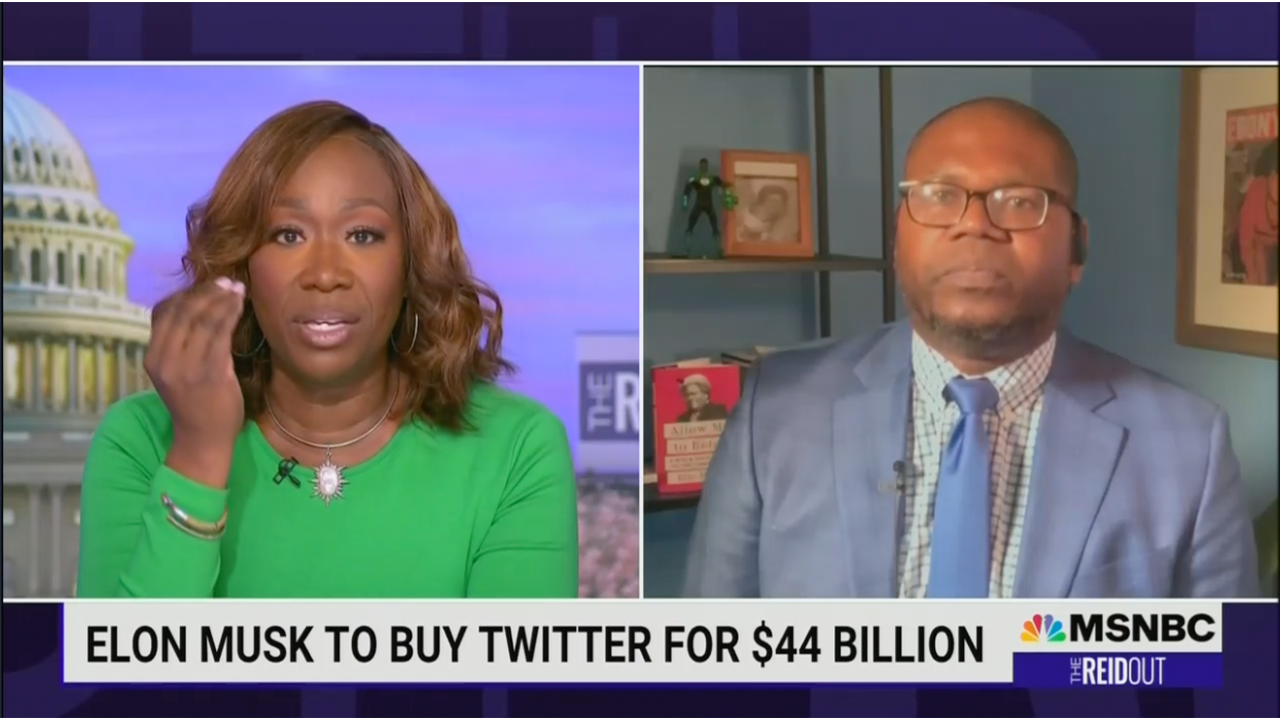 Along with her guest Jason Johnson, “The ReidOut” host was trashing Musk while mocking conservatives as “outsiders to the culture” who were going to miss being able to bully “smart” liberals, leaving Twitter.

“First he came out and tweeted, I hope my worst critics don’t leave.’ Yeah, buddy, because you know if the smart people and the people who criticize you leave, Twitter will have no value without the content that you get for free from intelligent people like Charles Blow and the attacks on people like Charles Blow from far right people who just enjoy attacking, particularly Black people on social media,” Reid said.

New York Times columnist Charles Blow was one of many liberal media figures who threatened to leave the platform after Musk’s takeover.

Her guest, MSNBC political contributor Jason Johnson, agreed that Musk’s move would backfire for the right, because he said they want “to control Twitter” so they can be where the “cool people are.”

Reid agreed and took it a step further, saying conservatives want to be able “punch people in the face” then laugh about it.

She claimed that Musk purchasing Twitter meant that he must “miss” the “old South Africa” in the 1980s, a clear reference to the time when the country was protesting apartheid.

“They have been described as being on the outside of the culture looking in through the glass, but they don’t just want to come in. They want to come in and be able to punch people in the face and walk around and laugh about it and then not have anyone be able to stop them,” Reid scoffed.

“The thing is the enjoyment they get out of being in this town square is being able to harass people, being able to attack people. There was a time when people had the double hashtags around their name because they were Jewish and right wingers were saying get in the oven’ any time you made any benign comment on Twitter. They attacked women. The misogyny was crazy on Twitter for a while. Elon Musk, I guess he misses the old South Africa in the 80s. He wants that back!” she added.

During a previous episode of “The ReidOut,” MSNBC contributor Anand Giridharadas made similar comments.

“He is building in Tesla, a documentedly racist company, that perhaps reminds him, gives him nostalgic memories of the apartheid in South Africa where he grew up,” Girirdharadas told Reid, Monday night.

The pair also rehashed liberal worries that Musk was going to use Twitter as a bully pulpit.

Calling Musk a Twitter “troll,” Reid proclaimed that Musks “idea of freedom” was “freedom to be a jerk and to be cruel and to have no one be able to stop you.”

MSNBC host Ari Melber was ridiculed Tuesday, after he fretted that Elon Musk would use Twitter to ban political candidates, and censor the reach of information they share.

Twitter has already been accused of doing what Melber predicted, when they censored the New York Posts Hunter Biden story from their platform, weeks before the 2020 election and permanently suspended President Trumps Twitter account in January 2021, after the Capitol Hill riot. US Shipping Law Won’t Do Much to Address Soaring...

Moon Knight writer is on board for the Mortal...

McCarthy says Jan. 6 rioters did not engage in...

Warriors investor faces backlash for saying ‘nobody cares’ about...

Burger King to sell vegan nuggets in bid to...

Navy issues one-day pause on some flights in wake...

WHO chief, facing criticism, makes case for another term

Sea of Thieves 2022 preview event will herald the...

‘Levelling up’ plan for UK will give workers control...