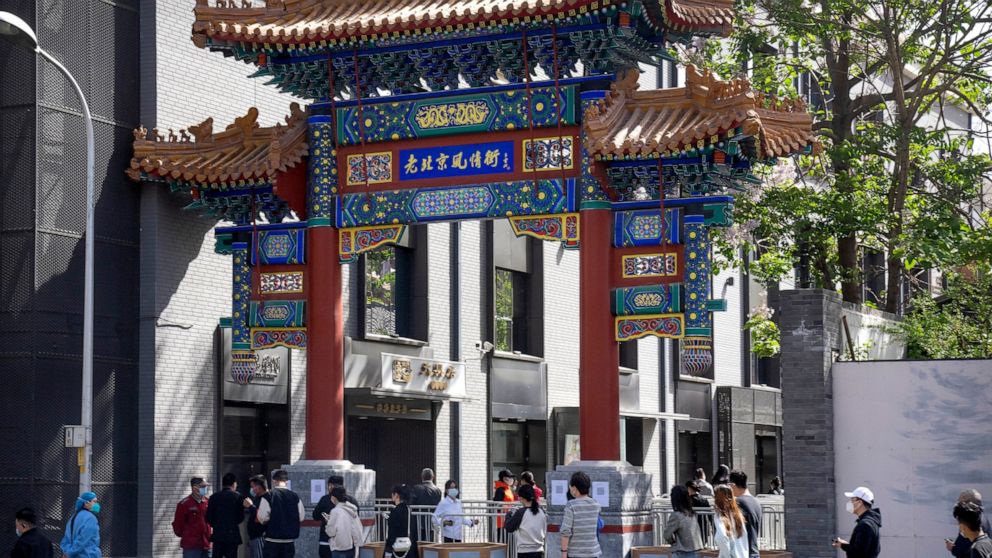 BEIJING — Chinas capital Beijing is enforcing mass testing and closing down access to neighborhoods as it seeks to contain a new COVID-19 outbreak.

Announcement of the testing had sparked panic buying in the city of 21 million on Monday, but the situation appeared to calm on Tuesday with public transport largely keeping to normal schedules and roads packed with commuters.

Fears of total lockdown have been fed by the situation in the southern business hub of Shanghai, where 25 million residents have only gradually been allowed to leave their homes after three weeks of confinement.

The city of Anyang in central China and Dandong on the border with North Korea became the latest to start lockdowns as the omicron variant of the coronavirus spreads.

Shanghai has buckled under strict lockdown conditions that have driven residents to band together to get food delivered through group buying. Goods have backed up at Shanghai’s port, affecting supplies and factory production and crimping economic growth.

Beijing locked down residents in an area about 2 by 3 kilometers (1 by 2 miles), telling them to work from home and stay in their residential compounds. It wasnt a total lockdown but stadiums, sports fields, cinemas, karaoke bars and other entertainment venues were ordered closed.

Elsewhere, the city also shut down some or all buildings in five residential compounds, adding to others have been locked down for two days. Beijing has recorded 80 cases in the most recent wave, while Shanghai has seen more than 300,000 and 190 deaths this month. Does Pot Have Health Risks?

Hoboken Pot Sellers Are So Eager to Open, They...

China to Allow Rapid Tests for First Time as...

‘Technical Recession’ Sets Up War of Words as US...

One of Warhol’s Marilyn Monroe portraits could fetch a...

Cost of living: Will this mean more home grown...

ECB Policymakers Will Ask Lagarde to Be Tough on...

One in six UK adults doubt human link to...

Beside a Golden Door

Yo! Egg cracks into U.S. restaurants with plant-based sunny-side-up,...

Cloudflare says it was almost fooled by a phishing...

China launches a COVID-19 vaccine inhaled through the mouth

How rich is LeBron James? Here’s a breakdown of...

Is religious freedom under attack in Nigeria?

NASA is now targeting November 14th for the Artemis...

Cardinals’ JJ Watt critically sums up season: ‘It was...

Australia tells Medibank hackers: ‘We know who you are’

What is Vladimir Putin’s Endgame?

Work starts to free Ever Forward stranded in Chesapeake...

The Xbox Series S is $50 off right now

Android 12L hands-on: Some big multitasking upgrades, but is...

US Department of Agriculture approves first-ever vaccine for honeybees

White House lights up in red, white and blue...

Nobody Is Playing Netflix’s Games

Which of Europe’s biggest names are still available on...

The Chinese drones over Washington

HBO Max's Batgirl movie might release first in theaters after all