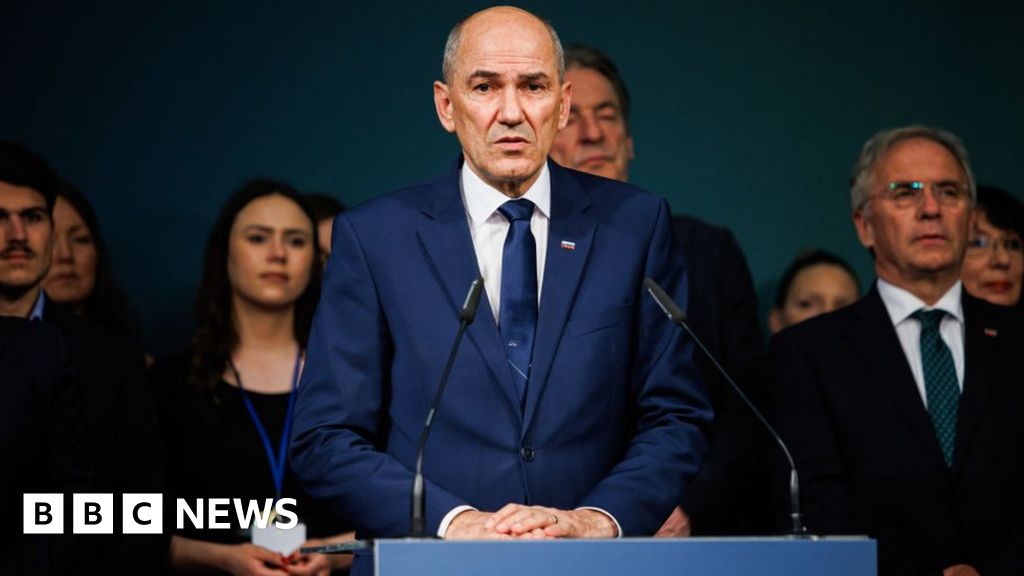 Image caption, Robert Golob ran on a pledge to return Slovenia to “normality” after the leadership of Janez Jana

Slovenia’s populist Prime Minister Janez Jansa has suffered a heavy defeat in parliamentary elections by a left-leaning party formed only in January.

Mr Jansa’s Slovenian Democratic party took about 24% of the vote, compared to 34.5% for the Freedom Movement party led by former businessman Robert Golob.

The poll was marked by allegations that Mr Jansa has undermined the rule of law in the former Yugoslav state.

Mr Golob said his win will enable him to lead his country “back to freedom”.

An outspoken supporter of former US President Donald Trump, Mr Jansa was seeking a fourth term a prime minister and stood on a platform of “stability”.

But his critics allege that the 63-year-old, who came to prominence as a post-communist reformer, has spent several years eroding democratic standards and restricting press freedom.

He engaged in lengthy rows with the EU over his moves to cut funding for the national news agency and has sought to delay the appointment of prosecutors to the bloc’s new anti-corruption body.

Mr Golob is a political newcomer who entered politics in January after being removed as chairman of his energy investment firm.

Image caption, Mr Jansa’s time in office has been controversial

He had billed the election as a “referendum on democracy”.

The 55-year-old celebrated his victory in isolation from his home after contracting Covid-19 and told jubilant supporters via livestream that “people want changes and have expressed their confidence in us as the only ones who can bring those changes”.

He is expected to form a governing coalition of other left-wing parties.

Turnout for the vote was significantly higher than expected, with some 70% of the country’s 1.7 million residents going to the polls – an increase of 18% on 2018’s poll. A much tighter race had also been predicted.

China’s Renewable Energy Fleet Is Growing Too Fast for...

Mariupol theater airstrike was ‘a clear war crime’ by...

Woman held in Germany after assault with ‘sword-like object’

New change at the Pentagon waters down focus on...

Brazil election: What to know about the high-stakes race

What’s next for the British monarchy?

Bryson DeChambeau hopes for US PGA Championship return after...

Over $100m worth of NFTs have already been stolen...

Hyph set to launch a music creation app with...

Justices side with LGBTQ group at Jewish university, for...

Gas prices dip just below $4 for the first...

Rush to Replace Russian Gas Will Bring Years of...

Tom Brady and Gisele Bündchen are splitting up after...

Klarna to Raise Fresh Cash at Slashed $6.5B Valuation

How the HHS is tackling COVID-19 and health issues

Why Wendy’s founder named his burger empire after his...

Senior defense official: No sign yet of Belarusian forces...

Post-Brexit London Races to Keep Its Head-Start in Fintech

AG: Disposing embryos outside uterus not against Tenn. law

The Rules Committee by the numbers