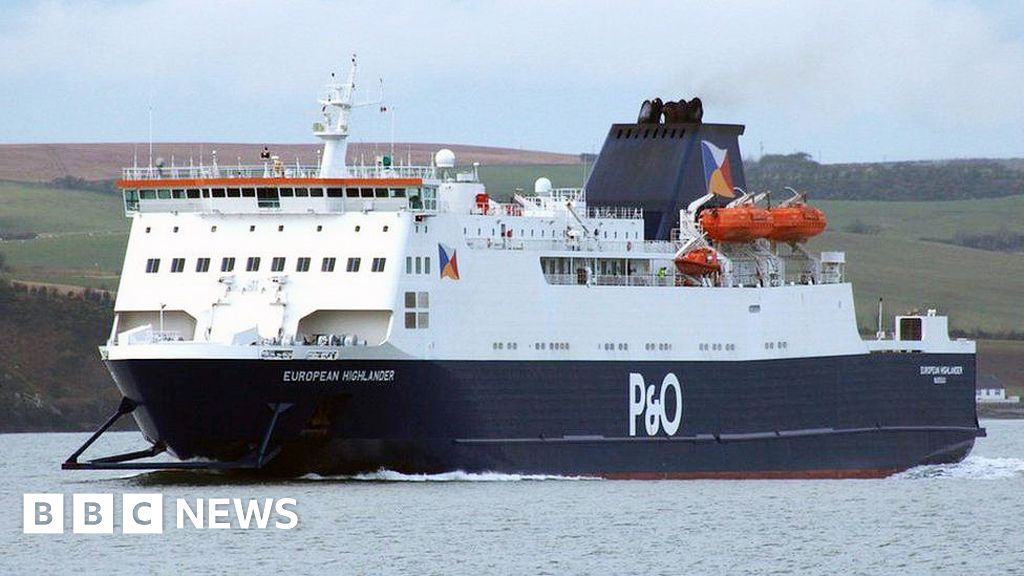 Image caption, The European Highlander runs between Cairnryan in Dumfries and Galloway and Larne in County Antrim

A P&O ferry that operates between Scotland and Northern Ireland must have a “small number of deficiencies” addressed before it can resume service.

The European Highlander has been inspected by the Maritime and Coastguard Agency (MCA).

A second P&O ferry operating on the Cairnryan to Larne route, the European Causeway, was earlier detained for two weeks over safety concerns.

It sailed again on 9 April but with limited services.

The firm suspended most of its sailings but reportedly only expected the disruption to last up to 10 days.

Some services resumed on the Cairnryan to Larne route on 11 April.

Inspections also prevented a number of other ferries from operating.

They included the Spirit of Britain on the busy Dover to Calais route, which has since been cleared to sail again.

A spokesperson for the MCA said: “The Spirit of Britain has been released from detention and can commence operations when P&O Ferries are ready.

“The inspection of the European Highlander is now complete; there are a small number of deficiencies and the MCA requires confirmation that these have been rectified before the vessel is free to resume service.

“There are no further inspections of P&O Ferries at the moment.”

Other ferries that have been inspected and cleared to sail by the MCA include the Pride of Hull, which operates between Hull and Rotterdam; Norbay, which runs from Liverpool to Dublin. A year after Lincoln Project co-founder’s predations came to...

China’s economy just had its best month since February

Serial Entrepreneur: The Many Lives of Marc Lore (Podcast)

Rodgers to stay with Packers but denies signing record-breaking...

Hershey warns it won’t be able to fully meet...

Bird strike stops train dead in its tracks for...

Tai’s ‘era of engagement’ in Asia

Culling ordered in Hong Kong after thousands of hamsters...

UK PM says Ukraine is in a very dangerous...

How companies can manage the risks in handling alternative...

Halo Infinite splitscreen co-op mode is back from the...

Italy Fails to Qualify for World Cup in Qatar

Australia set to go to polls in expected close...

This is why you shouldn’t respond to voicemails from...

Cost of living: What Tory MPs want from Rishi...

Joe DeVito: I put all my savings into gift...