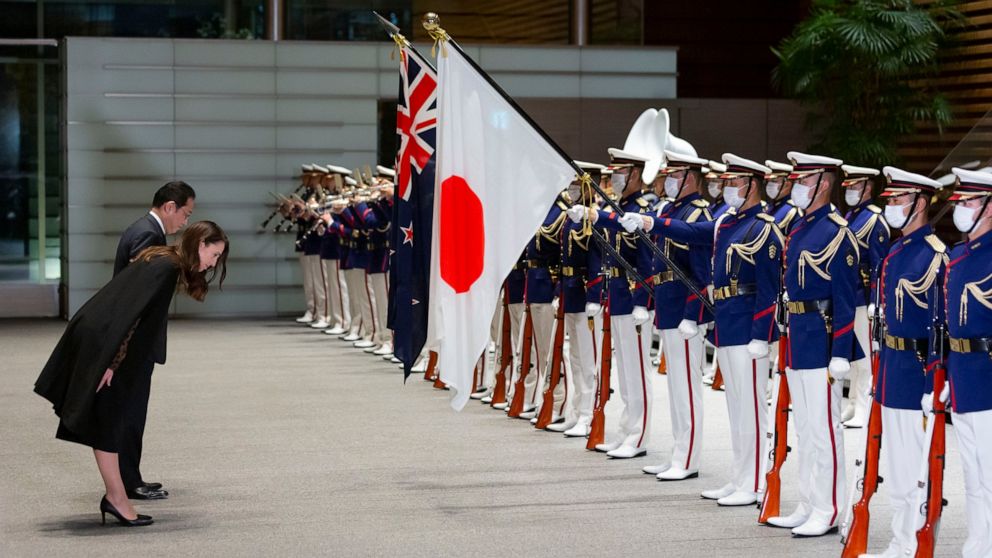 TOKYO — New Zealand Prime Minister Jacinda Ardern and her Japanese counterpart, Fumio Kishida, agreed on Thursday to strengthen the partnership in defense, trade and climate between their nations, including the beginning of formal talks toward a military information sharing agreement.

Ardern is in Japan on a three-day visit as part of her first trip abroad in more than two years, as her government seeks to promote the country’s reopening for business and tourism following a pandemic-related border closure.

Ardern said she and Kishida discussed Russia’s invasion of Ukraine at great length because we are at a critical juncture.”

Kishida said the two leaders strongly denounced the invasion. Use of force to change the status quo is impermissible. Japan and New Zealand oppose any such attempt in the East or South China sea or any other place, he said at a joint news conference after their talks.

The two leaders also raised concerns about the situation in the South China Sea, where China has militarized several artificially constructed islands and is pressing its extensive territorial claims.

They opposed any unilateral actions that could escalate tensions and undermine regional stability and the international rules-based order, according to a joint statement released by Japan’s Foreign Ministry.

As two democracies, our approaches to the challenges facing our Indo-Pacific region are closely aligned,” Ardern said. “We are committed to working toward a vision of an open, inclusive, stable and prosperous Indo-Pacific underpinned by the rules-based order and free from collusion.”

Japan is especially concerned about Chinese military and coast guard activity in the East China Sea near the Japanese-controlled Senkaku islands, which China also claims and calls Diaoyu.

Russia’s invasion of Ukraine has increased worry in Japan about rising tensions between China and Taiwan, which Beijing claims as its own territory.

Japan in recent years has expanded military ties beyond its traditional ally, the United States, forming partnerships and stepping up joint exercises with countries including Australia, India, Britain and Europe.

Japan and New Zealand agreed on Thursday to step up joint drills and seek a military information sharing agreement, which would be Tokyo’s 10th.

Ardern and Kishida also shared concerns about human rights conditions in China’s Xinjiang autonomous region and crackdowns on freedoms in Hong Kong. They agreed to deepen cooperation in trade and in areas such as renewable energy and green technology.

The two leaders were expected to discuss a new security agreement signed by China and the Solomon Islands that allows China to send police and military personnel to the Pacific island nation while also opening the door for Chinese warships to stop in port. It has triggered worries of a possible Chinese naval base on the doorstep of Australia and New Zealand.

The new security agreement between China and Solomon Islands could affect the security of the entire Pacific region, and Japan is watching the development with concern, Chief Cabinet Secretary Hirokazu Matsuno said earlier Thursday.

Solomon Islands Prime Minister Manasseh Sogavare said the pact would not undermine the peace and harmony of our region. He said his government would not let China build a military base there, and China has denied seeking a military foothold in the South Pacific.

Ardern arrived in Japan late Wednesday after a three-day visit to Singapore, where her talks with leaders focused on economic and bilateral cooperation on climate change and adopting low-carbon and green technologies.

New Zealand imposed a strict border closure during the pandemic. It will reopen its borders to tourists from Japan, Singapore and many other countries from May. International tourism previously accounted for about 20% of New Zealands foreign income and more than 5% of its gross domestic product, but evaporated after the pandemic began. Iran admits to supplying Russia with military drones in...

Is Russell Westbrook’s injury claim a precursor to Lakers...

Seattle Chinatown residents up in arms over planned expansion...

Falling prices online and at the pump fuel hopes...

Radio 1Xtra: Jamz Supernova ‘happy and complete’ as she...

Flutterwave responds as CEO is put on the spot...

This is how your government works now

A Rays fan made the easiest play on a...

Elon’s erratic entry leaves Twitter in chaos as he...

Carl Pei’s Nothing is working on a smartphone

Scottish Open: LIV golfers have ‘made their bed’ –...

Strong U.S. dollar is wreaking havoc across pretty much...

Amazon’s kid-focused Glow device is 55 percent off for...

Serious Java vulnerability lets hackers masquerade as anyone they...

Loneliness and unhappiness may accelerate aging faster than smoking

Realism And The Ukraine War

Chinese engineer sentenced to 8 years in US prison...