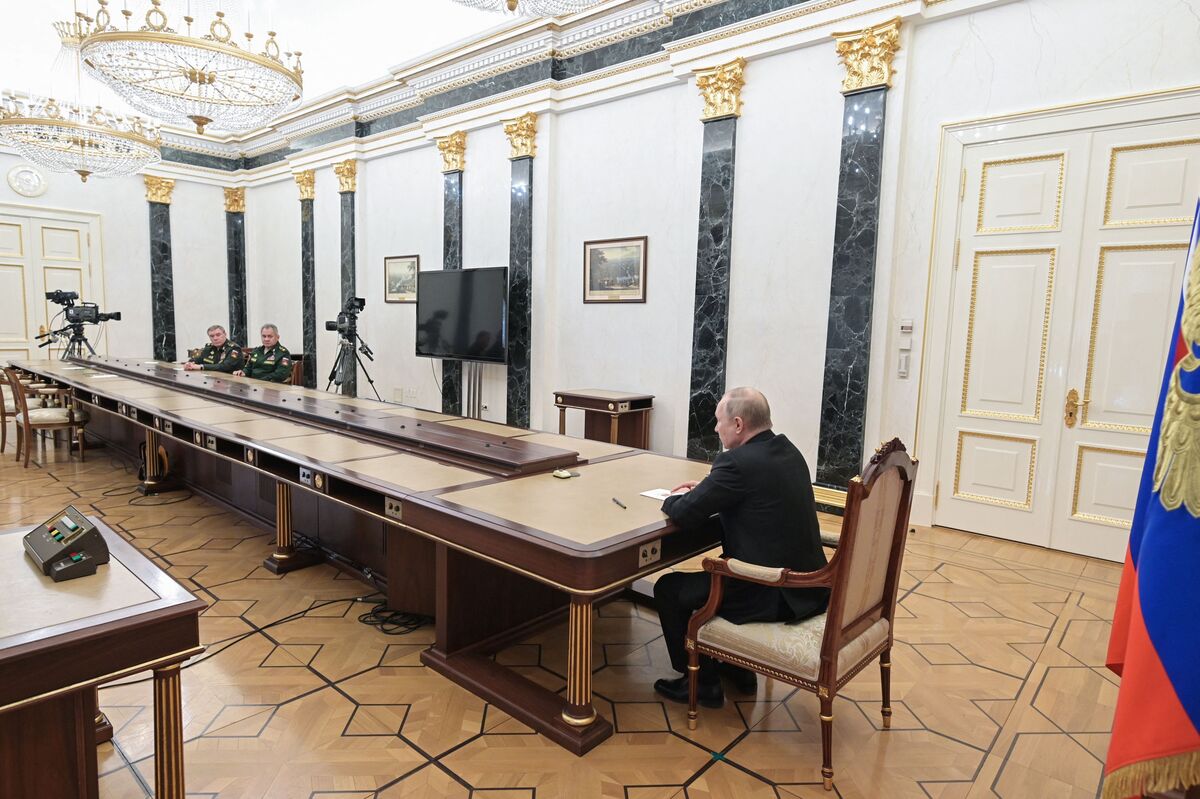 The ranks of the critics at the pinnacle of power remain limited, spread across high-level posts in government and state-run business. They believe the invasion was a catastrophic mistake that will set the country back for years, according to ten people with direct knowledge of the situation. All spoke on condition of anonymity, too fearful of retribution to comment publicly.

So far, these people see no chance the Russian president will change course and no prospect of any challenge to him at home. More and more reliant on a narrowing circle of hardline advisers, Putin has dismissed attempts by other officials to warn him of the crippling economic and political cost, they said.

Some said they increasingly share the fear voiced by U.S. intelligence officials that Putin could turn to a limited use of nuclear weapons if faced with failure in a campaign he views as his historic mission.

People walk through debris and destroyed Russian military vehicles on a street in Bucha on April 6 after Ukrainian forces took back control of the northern town.

To be sure, support for Putins war remains deep across much of Russias elite, with many insiders embracing in public and in private the Kremlins narrative that conflict with the West is inevitable and that the economy will adapt to the sweeping sanctions imposed by the U.S. and its allies. And public backing remains strong as the initial shock and disruption from sanctions has given way to a kind of surreal stability in Russia.

Still, more and more top insiders have come to believe that Putins commitment to continue the invasion will doom Russia to years of isolation and heightened tension that will leave its economy crippled, its security compromised and its global influence gutted. A few business tycoons have made veiled statements questioning the Kremlins strategy, but many powerful players are too fearful of the widening crackdown on dissent to voice their concerns in public.

WATCH: Former U.S. Treasury Secretary Jacob Lew weighs in on the effectiveness of the sanctions on Russia amid the “troubling” war in Ukraine.

The skeptics were surprised by the speed and breadth of the response by the U.S. and its allies, with sanctions freezing half of the central banks $640 billion in reserves and foreign companies ditching decades of investment to shut down operations almost overnight, as well as the steadily expanding military support for Kyiv thats helping its forces to blunt the Russian advance.

Senior officials have tried to explain to the president that the economic impact of the sanctions will be devastating, erasing the two decades of growth and higher living standards that Putin had delivered during his rule, according to people familiar with the situation.

People look at empty shelves in the sanitary napkin section at a shopping mall in Moscow on Mar. 16.

Putin brushed off the warnings, saying that while Russia would pay a huge cost, the West had left him no alternative but to wage war, the people said. Publicly, Putin says the economic Blitzkrieg has failed and the economy will adapt.

The president remains confident that the public is behind him, with Russians ready to endure years of sacrifice for his vision of national greatness, they said. With the help of tough capital controls, the ruble has recovered most of its initial losses and while inflation has spiked, economic disruption remains

Putin is determined to push on with the fight, even if the Kremlin has had to reduce its ambitions from a quick, sweeping takeover of much of the country to a grueling battle for the Donbas region in the east. Settling for less would leave Russia hopelessly vulnerable and weak in the face of the threat seen from the U.S. and its allies, according to this view.

In the weeks since the invasion started, Putins circle of advisers and contacts has narrowed even further from the limited group of hardliners hed regularly consulted before, according to two people. The decision to invade was made by Putin and just a handful of hawks including Defense Minister Sergei Shoigu, General Staff chief Valery Gerasimov, and Nikolai Patrushev, secretary of Russias Security Council, these people said.

Kremlin spokesman Dmitry Peskov didnt immediately respond to a request for comment for this article. Foreign Minister Sergei Lavrov didnt give a direct answer to

repeated questions about whether Russia might use nuclear weapons in Ukraine in an interview released Tuesday.

The critics see no sign that Putin is yet ready to consider cutting short the invasion given the losses or making the serious concessions needed to reach a cease-fire. Given his total domination of the political system, alternative views take root only in private.

Limited information contributed to the Kremlins miscalculation in the early days of the offensive, betting on broader support among Ukrainian troops and officials, as well as quicker military progress, the people with knowledge of the matter said. The Russian leader also underestimated his Ukrainian counterpart, initially perceiving him as weak.

Abramovich attends the peace talks between delegations from Russia and Ukraine in Istanbul on Mar. 29.

Roman Abramovich, the billionaire who has helped broker the so-far-unsuccessful peace talks, had to disabuse Putin of his conviction that Ukrainian President Volodymyr Zelenskiy, a former comedy actor, would flee the country once the invasion began, according to people familiar with the conversations.

Inside the main successor to the KGB, the Federal Security Service, frustration with the failure of the invasion so far is growing, according to Andrei Soldatov, an expert on the Russian security services. Others there had expected the fighting would last no more than a few weeks, according to people familiar with the situation.

Broke Oligarch Says Sanctioned Billionaires Have No Sway Over Putin

Only one senior official has so far broken publicly with the Kremlin over the invasion: Anatoly Chubais, the unpopular architect of the 1990s privatizations and the Kremlins climate envoy. He

left the country and Putin removed him from his post.

Others who sought to quit  including central bank chief Elvira Nabiullina  were told they had to stay on to help manage the economic fallout, according to people familiar with the situation. Some lower-profile officials asked to be transferred to jobs not related to policy making, the people said.

Senior officials have denounced those who left the country as traitors.

Among business tycoons, many of whom saw yachts, properties and other holdings seized under sanctions imposed by the U.S. and its allies, a few have been critical of the war  though without mentioning Putin.

Metals tycoon Oleg Deripaska called the war insanity in late March, saying it could have ended three weeks ago through reasonable negotiation. He warned fighting could continue for several more years.

Some in the elite have pushed for an even harder line. After Kremlin spokesman Dmitry Peskov defended a prominent TV host who had left the country in the days after the invasion, Chechen strongman Ramzan Kadyrov  whose troops are fighting in Ukraine  blasted him for insufficient patriotism.

Putin has built his regime mainly on stoking public support, which has given him the means to control the elite, said Tatiana Stanovaya of political consultant R.Politik. Theres no room for disagreement or discussion, everyone must just get on with it and implement the presidents orders and as long as Putin keeps the situation under control, people will follow him.

The Big Take and subscribe to our newsletter: One must-read story delivered

straight to your inbox each day. The U.S. Is Expanding Its Hunt for Early Warnings...

A Solution to Apple’s iPad Software Conundrum: Offering a...

Sue Gray partygate report: The key findings at a...

A New World of Work is Revealed (Podcast)

Beijing accuses US of inciting Lithuania over Taiwan

US, allies to revoke ‘most favored nation’ status for...

More than 1,000 students were sexually abused at this...

Protecting the creative economy during COVID: Arts and the...

Opinion | Jan. 6 Proved the Durability of the...

4 takeaways from Biden’s day of emergency summits on...