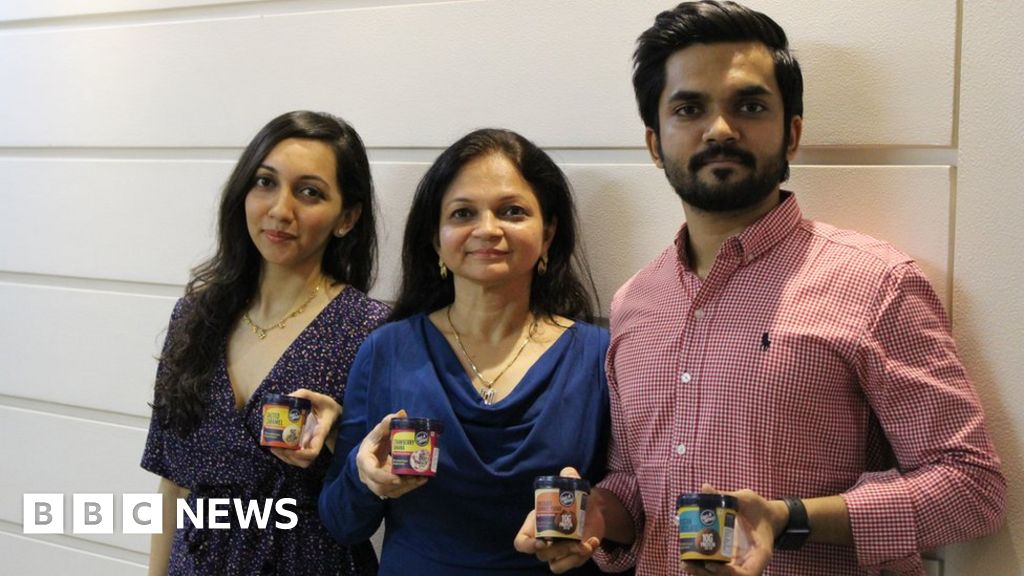 Image caption, Jimmy Shah and Jash Shah took home 10 million rupees in return for a 15% stake in their company, Get-A-Whey

On the other end was a producer for Shark Tank, the Emmy-nominated reality television series where entrepreneurs pitch their business ideas to seven “sharks” – or investors – who then decide whether or not to invest in them.

Ms Pashmi was invited to pitch Get-A-Whey – a keto-friendly, low-sugar ice cream brand she managed with her brother Jash, and mother Jimmy – on the Indian version of the show

The brother-sister duo loved desserts and were always on the lookout for healthy options. So one day, their mum experimented on an ice-cream with whey protein powder, a health supplement.

“When we tried it, we were surprised it tasted so good,” Ms Pashmi said.

They tweaked the recipe over six months, got a food technologist to come on board and launched Get-A-Whey in 2019.

Get-A-Whey was among 67 businesses to which Shark Tank’s investors committed more than 400m rupees. According to reports, the series received more than 62,000 pitches for the first season itself, from start-ups all over India.

In a blog soon after the first season of the show came to a close, Anupam Mittal, the founder of one of India’s largest matrimonial websites, wrote that he believed the show “has been the catalyst that will change India’s entrepreneurial landscape forever”.

He went on to explain that of the 67 businesses that received deals on the show, 59 had one founder under the age of 25, and 29 had at least one female co-founder.

Most importantly, the show shone a spotlight on a new breed of young, risk-taking entrepreneurs and changing attitudes towards entrepreneurship in India.

Image caption, What started as an experiment landed up becoming a successful business for Pashmi, Jimmy and Jash Shah

Both Ms Pashmi and her brother quit well-paying jobs to start their business.

“It was difficult to convince our father at first,” she says.

By the end of last year, the Shahs were selling 8,000 units of their product per month, and making nearly 1m rupees in revenue.

After their Shark Tank episode aired in January this year, sales across India went through the roof. For the first quarter, they sold a whopping 65,000 units and made close to 8.5m rupees.

Ankur Warikoo, internet entrepreneur and best-selling author, says that Shark Tank has done a commendable job of bringing people like Pashmi Shah to the forefront.

“But the biggest thing it’s done is to make them aware that their ambitions can be a lot bigger than what they had set out to do, and if money is a hindrance – then here is the money.”

Mr Warikoo says India has always had this entrepreneurial drive, even away from the traditional, rich businesses that rode an early wave of entrepreneurial success in the early 90s.

“Don’t disregard the element that there are millions of families in India where parents have worked as daily-wage labourers and now their kids are saying, ‘You know what, I will set up a mobile repair shop or a cloud kitchen or I will become an Uber driver and have a fleet of Uber cars that I can rent out’,” he explains.

The show, he says, has successfully legitimised the career path of a self-made entrepreneur to a generation of parents who would earlier be cynical or doubtful of such a risky move.

Ashneer Grover, one of the “sharks” on the show and the founder of one of India’s most prominent fintech companies, credits the internet for much of the change.

“Someone who is building a business is thinking of it in pan-India terms now. They’re not selling themselves as an expert in their local regions but have larger ambitions,” he says.

Writer and entrepreneur Rashmi Bansal says the Indian middle class earlier believed that a professional degree leading to a steady job was better than running a business. “That has changed – the idea of ‘doing your own thing’ has moved from the fringes to the mainstream.”

She gives the example of a start-up meeting she attended in the remote Bastar district in the central state of Chhattisgarh.

“To my surprise, six local entrepreneurs showed up. All of them had plans of going national or international,” she says, adding that Shark Tank reflects this new aspiration of an India where you don’t need a rich father or godfather to succeed.

Mr Grover puts this down to a hunger for success seen in entrepreneurs from smaller towns and cities.

“They have a fire in their belly,” he adds, giving the example of Revamp Motors which pitched a utility electric bike aimed at gig workers on the show.

“The amount of engineering put into building that e-bike with such a small amount of capital was mind-blowing. This gives me the confidence that if we come down to doing hardcore engineering ourselves, it is a very good sign for India,” he says.

Image caption, The daughter-in-law and mother-in-law duo won the praise of judges for breaking stereotypes

“Shark Tank’s success is that it became a dinner-table conversation,” Surabhi Shah, a second-generation entrepreneur says.

She and her mother-in-law, Chetna Shah, pitched their business idea – Carrabox, an eco-friendly food packaging concept – on Shark Tank and took home 5m rupees in return for a 20% stake.

Surabhi, who comes from a traditional business family, says the idea of taking someone else’s money for a piece of “my company was a very alien concept”.

But attitudes have changed and taking that risk of starting your own idea is not taboo anymore, she adds.

“Terms like equity and investment existed in textbooks when we were growing up. But now it’s on national television. You can start your own shop on Instagram and scale up,” she explains.

But negotiating a successful deal was not the only win for Surabhi and her mother-in-law on Shark Tank.

“What I find interesting is that even now our TV soaps show the mother-in-law and daughter-in-law fighting,” Aman Gupta, a “shark” and the co-founder of one of India’s largest consumer electronics brand, remarked on the portrayal of the mother-in-law as domineering and shrewd.

“Seeing you both here today makes me very happy. India will be inspired that a mother-in-law and daughter-in-law can also go into business together,” Mr Gupta said, to applause from the other investors.

From the Arctic to flying the flag for Selkirk

Biden slammed as ‘snob from Delaware’ who ignores Texas...

An air fryer is the secret to crisp, crunchy...

Europe hasn’t been this cheap for Americans in decades

10 key passages from Alito’s draft opinion, which would...

Rep. Waltz: Not surprised American pride has declined the...

Child marriage: ‘Titi’ was forced into marriage as a...

Working with assertive China a must – New Zealand...

Ukraine war: Answering your questions on the conflict’s latest...

Biden moves to expand offshore wind to Gulf of...

Tencent stock falls as Prosus/Naspers to sell shares to...

Nashville police on hunt for burglar spotted on camera...

Husky’s Response to Owner Telling Him ‘I Love You...