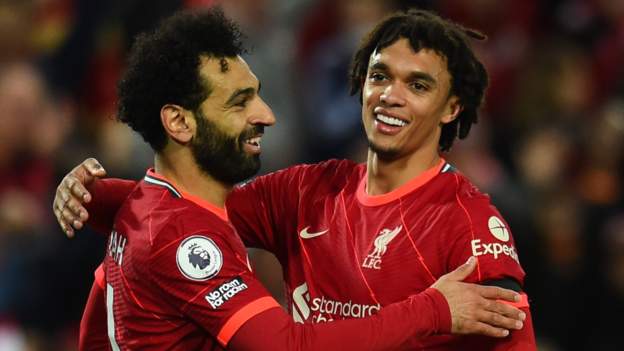 Liverpool moved top of the Premier League as they outclassed Manchester United at Anfield and dented the visitors’ hopes of a top-four finish.

The home side continued to dominate and Salah slotted in a deserved second from Sadio Mane’s reverse pass.

After their 5-0 win at Old Trafford in October, Liverpool are the first club to score at least eight Premier League goals against United in a single season.

The victory moves Jurgen Klopp’s side two points clear of defending champions City, who have seven matches left to play and can regain top spot when they face Brighton on Wednesday.

United, who could have moved level on points with fourth-placed Tottenham, remain sixth. On Saturday, the Red Devils go to fifth-placed Arsenal.

Liverpool’s Luis Diaz opened the scoring with his third Premier League goal since joining from Porto for £37.5m in January

‘Someone else’s festival’: No North Korea at ally’s Olympics

Dodgers’ Walker Buehler out until at least late season...

Bruce Willis, diagnosed with aphasia, steps away from acting

Traders in China Rush to Check Metal Stocks on...

Tucker Carlson: Restoring democracy is the only way to...

What Did Trevor Reed Do? Why Marine Was in...

Sir Keir Starmer: Labour will not be influenced by...

Next Africa: A Step Change in the Fight for...

Platinum Jubilee: Charles and Camilla to join public for...

After a year away, Oscar nominees celebrate together

Taiwan not included in launch of new Biden Indo-Pacific...

CDC to reconsider latest guidance amid backlash, rise in...

Authorities say 55 people have been killed in northern...

Motor Racing-Ferrari’s Sainz gets podium boost ahead of return...

Children among victims of blast at school in Kabul,...

Palihapitiya SPAC Is Said to Be in Talks With...

Musk’s Twitter Offer Is As Good As It Gets:...

Internet Torn Over Man Snapping at Wife: ‘Give Me...

New Global Supply Gauge Signals Some Relief Might Be...

Bukayo Saka ‘always wanted to be that guy’ for...

Gird yourselves. The summer of travel chaos just got more chaotic