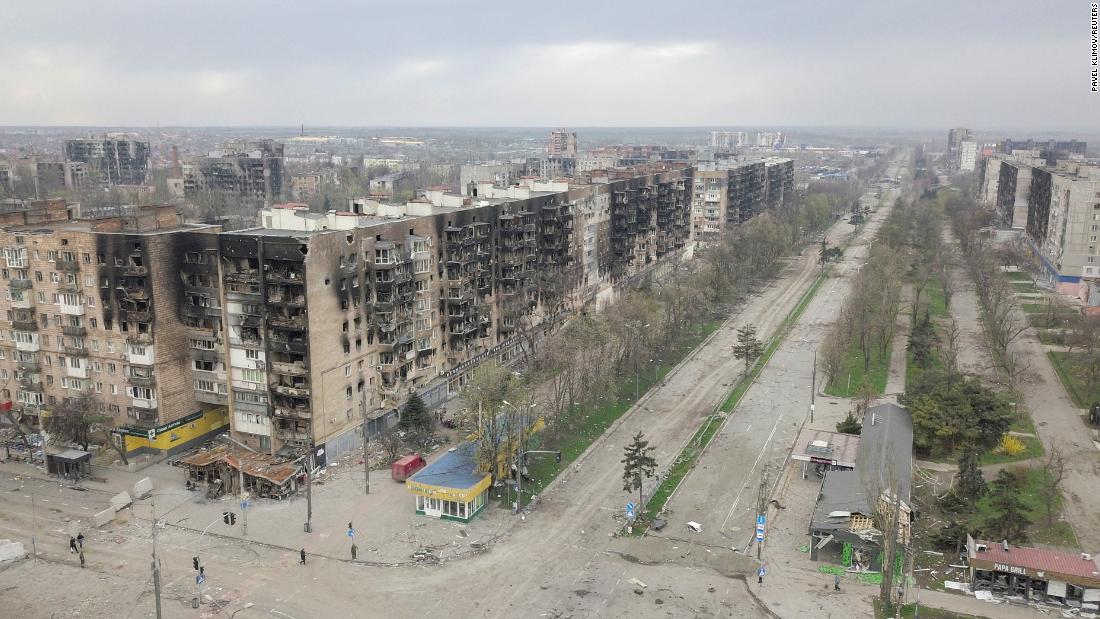 (CNN)Millions of people are cranking up the heat as much of the Northeast US braces for a rare April blast of winter weather. The high demand sent natural gas futures soaring yesterday to levels unseen since 2008. Overall, natural gas is up by a staggering 113% since the end of last year.

Here’s what you need to know to Get Up to Speed and On with Your Day.

(You can get “5 Things You Need to Know Today” delivered to your inbox daily. Sign up here.)

The battle for control over the Donbas region is currently underway, and the outcome may define Russian President Vladimir Putin’s invasion after his forces suffered costly failures in Kyiv and across central and northern Ukraine. In eastern Ukraine, Russian forces have completed the regrouping of troops to launch an offensive to establish full control over the Donetsk and Luhansk regions, a Ukrainian defense ministry spokesperson said. Meanwhile, Ukrainian President Volodymyr Zelensky said his forces need weapons quickly, pushing back against concerns from US and NATO officials that his military would need significant training before receiving advanced weapons from other countries. Separately, US Customs and Border Protection officials said they encountered about 5,000 Ukrainians in March, including 3,274 along the US southern border, according to newly released agency data.

The CDC’s mask mandate for travelers is no longer in effect on airplanes and other public transport methods following a federal judge’s ruling yesterday. US District Judge Kathryn Kimball Mizelle said the mandate was unlawful because it exceeded the authority of the CDC and because its implementation violated administrative law. “The agencies are reviewing the decision and assessing potential next steps,” a Biden administration official said last night, adding the CDC still recommends that people continue to wear masks in indoor public transportation settings. After the mandate was struck down, several US airlines announced that masks are now optional on their aircraft — including Delta Air Lines, American Airlines, United Airlines, Southwest Airlines, Alaska Airlines and JetBlue.

Twitter has indicated that it’s not interested in being bought by Elon Musk without a fight. After the Tesla and SpaceX CEO offered to buy Twitter last week, the company’s board implemented a shareholder rights plan, known as a “poison pill,” that would make it harder and more expensive for Musk (or any other would-be buyer) to acquire the company without the board’s approval. Now, eyes are back on Musk to see how he might respond to the board’s defensive measure. Musk, who currently owns around 9% of shares in the company, could decide to withdraw his bid, or he could sit tight and exercise the still-significant influence he’d have at the company as one of its largest shareholders. Musk said last week that he has a “Plan B” if his bid falls through, although he declined to elaborate on what it is.

Following the death last month of a 14-year-old boy who fell from an amusement park ride in Orlando, Florida, a forensic engineering firm hired to investigate the incident found the ride’s operator made manual adjustments to two seats. Those adjustments were made “presumably, to allow for larger riders, which should not have happened based on the manufacturer’s guidelines,” State Rep. Geraldine Thompson said in a news update yesterday. According to the report, the harness on one of the seats was manually loosened to to allow a restraint opening of near 7 inches — about 4 inches more than the normal opening range for the restraints. The FreeFall drop tower manufacturer’s guidelines also put a rider’s weight limit at 250 pounds; Tyre Sampson — the teen who died — weighed approximately 340 pounds, his family told CNN. Authorities said they are working to conclude the investigation before assessing what penalties may come.

The right-wing conspiracy outlet Infowars has filed for bankruptcy protection as its founder Alex Jones faces several defamation lawsuits. The move, which could pause civil litigation against the companies, comes after Jones was found legally responsible for damages in three defamation lawsuits related to false claims he made about the 2012 Sandy Hook mass shooting. In the aftermath of the shooting, in which 26 people were killed, Jones baselessly said the incident was staged. He later swore in a deposition that a “form of psychosis” caused him at the time to believe it was staged. The documents filed on Sunday sought bankruptcy protection for Infowars and Prison Planet, another one of Jones’ right-wing outlets. Jones also sought bankruptcy protection for Infowars Health, a store from which Jones has hawked nutritional supplements and other products.

This is how one CNN employee saved another colleague’s life

We know you’ve been cooking up some heat, Kendrick! It’s been five years!

The benefits of having a routine

Life tip: Use your calendar. Research shows that sticking to routines can support cognitive function and boost your health.

That’s how much a university in southern Ohio has agreed to pay a professor after initially disciplining him for his refusal to use a transgender student’s preferred pronouns. Nicholas Meriwether, a philosophy professor at Shawnee State University, refused to use the pronouns because it went against his beliefs as a Christian, his attorney said. Meriwether filed a lawsuit in 2018 alleging a violation of his free speech rights. As part of the settlement, the university agreed that Meriwether has the right to choose when to use, or avoid using, titles or pronouns when referring to or addressing students.

“Apple has grown to be the most valuable company in the world. Why should its retail workers live precariously?”

— Apple store employees at New York’s Grand Central Station, announcing they are trying to form a union. Some workers at the store say a union is needed because wages have not kept pace with the cost of living in New York City. They also want better job protections. If they gather signatures from at least 30% of the workers at the store, the National Labor Relations Board can hold an election.

Puppy opens its eyes for the first time

Did you know dogs can only see the colors blue and yellow? Check out this video to view what it looks like behind the eyes of a dog! (Click here to view) New Year, New You with Disney Be Well

Mets star Pete Alonso says he is thankful to...

Why did 17 African countries abstain from the UN...

Who are Putin’s daughters? What we know about his...

‘Sextortionists’ are increasingly targeting young men for money. The...

Review: How George Floyd became an icon for Americans

High-flying Stefanik scorched by allies’ whisper campaign against a...

Multiple investigations are underway as protests in Canada over...

A Cold Winter for Europe? (Audio)

TSA is expanding use of screeners to help at...

Popular hard seltzers to be scarcer in Utah under...

Hawaii has highest life expectancy of any state: CDC

Swiss watchdog in touch with Credit Suisse over client...

How to Protect Unborn Life in a Post-Roe America...

9 new streaming movies and TV shows you can...

The inside story of the infamous SolarWinds hack

Dennis Gartman Says Stocks in Bear Market Until a...

Ulster: Province did not ‘throw the book out’ after...

Ukrainian Parliament member: “We will win” war against Russia

Henkel to Exit Business in Russia Over Ukraine Invasion - Bloomberg