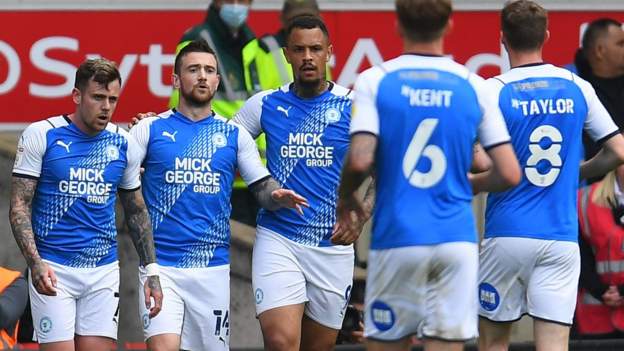 Peterborough United kept their slim Championship survival hopes alive with a narrow win at Barnsley to all but confirm the Tykes’ relegation to League One.

And Frankie Kent rounded off the win for the visitors, nodding in a corner 15 minutes from time.

With 21st-placed Reading drawing 4-4 with Swansea, Peterborough are seven points off safety with three games remaining.

Barnsley stay rooted to the foot of the table and are 11 points off the Royals with four matches left to play.

The Tykes will go down if they fail to beat Huddersfield Town on Friday.

Posh will be relegated if Reading beat Hull City on Saturday or they lose to Nottingham Forest on the same day.

Barnsley were the better side for much of the game with Domingos Quina hitting the crossbar early in the first half and Carlton Morris forcing a fine save from Peterborough keeper David Cornell with a looping header.

But once Posh went in front through top-scorer Marriott they frustrated their opponents with Barnsley limited to half-chances in the second half.

Ultimately though, this result seems too little too late for both sides and it remains highly likely they will meet each other again in the third tier next season.

Daniel Gerard on the Markets (Radio)

Cain: Fauci made it unmasked to before and after...

Spreading Disney Magic Across the World, One Tour at...

KitKat and Durex makers Nestle and Reckitt warn of...

Cast Events to a Quinjet Landing: An Adventurous First...

Prosecutor: 3 cops in Floyd killing ‘chose to do...

Texas day care gets reprieve after drilling plan is...

Ukraine round-up: Zelensky in Kharkiv and a pro-Putin propaganda...

Senator Chris Coons on Russia invasion of Ukraine and...

Divisions in Lebanon over questioning of central bank chief

Court: Amazon customers can sue over lack of toxic...

Biden to give remarks at Walter Mondale’s memorial service

Ambassador to NATO: ‘The US does not have a...

Battle over A-10: Lawmakers seek to break perennial deadlock...

Draft order would have had DHS seize voting machines