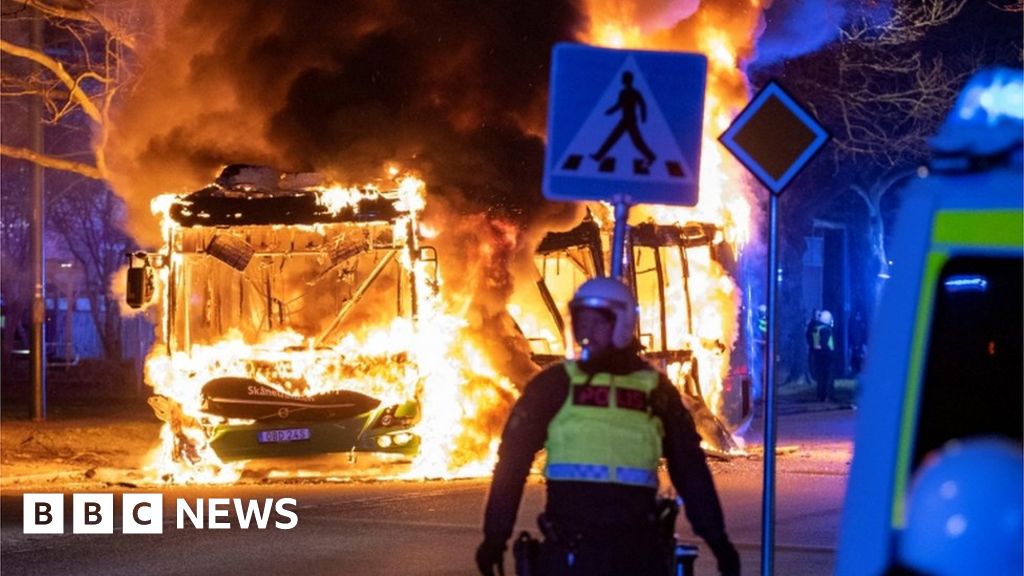 Image caption, Police broke up crowd of protestors in the Rosengrad area of Malmo on Saturday

There has been a third night of unrest in Sweden after protests against a far-right group which burned a copy of the Quran and planned to do so again.

Violence broke out in the city of Malmö late on Saturday after a gathering of the Stram Kurs, or Hard Line, movement led by the extremist Rasmus Paludan.

Vehicles were set on fire, and some protesters threw stones at the police.

A number of other clashes between the police and counter-demonstrators have hit Sweden in recent days.

At least 16 police officers are reported to have been injured and several police vehicles destroyed in unrest that followed the far-right group’s rallies, including in the suburbs of Stockholm and in the towns of Linköping and Norrköping.

Sweden’s national police chief Anders Thornberg said demonstrators had shown an indifference to the lives of police officers, adding: “We have seen violent riots before. But this is something else.”

Outrage at the far right group’s actions – which included burning a copy of the Muslim holy book on Thursday, and planning to do so again at other rallies – has also spread beyond Sweden’s borders.

Iraq’s foreign ministry summoned the Swedish charge d’affaires in Baghdad on Sunday and warned the affair could have “serious repercussions” for relations between Sweden and Muslim communities in general.

Protests against plans by Stram Kurs to burn the Quran have turned violent in Sweden before. In 2020, protesters set cars on fire and shop fronts were damaged in clashes in Malmö.

Paludan – who was jailed for a month in 2020 for offences including racism in Denmark – has also attempted to plan similar burnings of the Quran in other European countries, including France and Belgium. AI can now play Minecraft just as well as...

The Open: McIlroy and Hovland level at the top...

Five ways the Russian invasion of Ukraine could impact...

Opinion: A Supreme Court ruling for those who believe...

Tanning salon death: Woman in her 30s dies in...

Portugal to speed up solar parks to cut gas...

Meta receives more than a million appeals over removed...

Former UK transport minister says she was fired for...

Authorities turn to toxicology lab in mysterious deaths of...

These Supreme Court arguments are about far more than...

‘Drug addiction needs care and support, not stigmatisation and...

A folding-screen MacBook is an absolutely terrible idea

Comedian Janey Godley reveals she is clear of cancer

Birmingham Phoenix’s Will Smeed reaches The Hundred’s first ever...

The Future of Latin America May Have Arrived

Open: This is "Face the Nation with Margaret Brennan," April 17