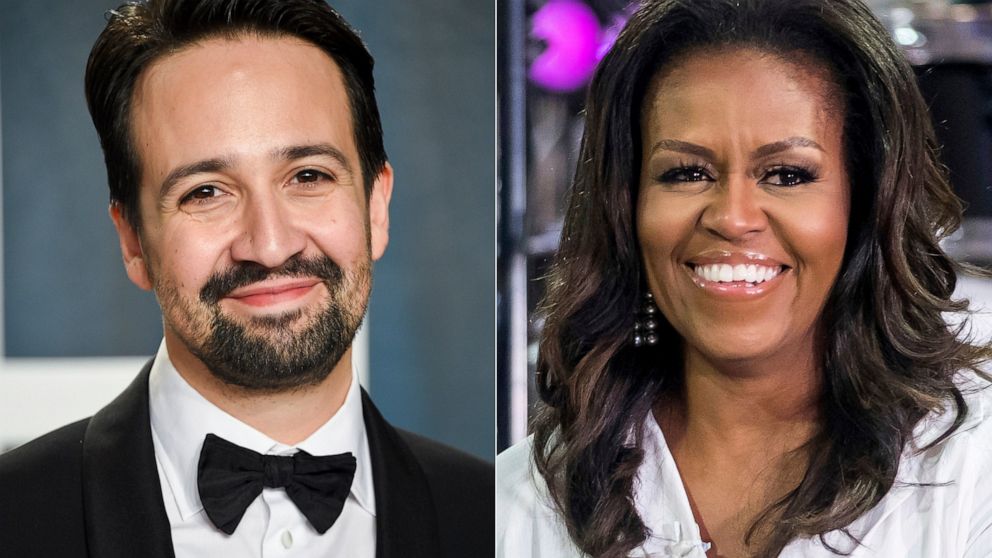 Roll Up Your Sleeves, airing at 7 p.m. EDT Sunday on NBC, will feature Matthew McConaughey interviewing Dr. Anthony Fauci to help separate fact from fiction about the vaccines, the network said.

Biden will make a direct appeal in support of the effort, while Obama will be joined by basketball greats Charles Barkley and Shaquille ONeal to reinforce the role of vaccines in allowing Americans to get their lives back on track.

Former first lady Michelle Obama will team with Miranda, Faith Hill and Jennifer Lopez in support of shots during the hour-long special hosted by spouses Russell Wilson, the NFL quarterback, and actor-singer Ciara.

Parents of American jailed in Russia say they are...

The parents of Trevor Reed, a former U.S. Marine in a Russian prison, hope the summit between Joe Biden and Vladimir Putin will lead to a prisoner swap.
Read more

An Army base in Wisconsin is preparing to welcome...

As Afghans flee the Taliban regime and flow into the United States, they are landing in places like Fort McCoy, situated in rural Wisconsin.
Read more

Moderna Inc. plans to double enrollment in a trial of its Covid vaccine in children under age 12, following a request from U.S. regulators to collect additional safety data.
Read more

A new rumor suggests the iPad Pro 2021 will be on sale on May 22, but it's an odd situation so take it with a pinch of salt.
Read more

The decision to not renew Sarah Rainsford's visa is an "assault on media freedom", the corporation says.
Read more

Didi Is Said to Accelerate IPO Plans as Business...

Chinese ride-hailing giant Didi Chuxing Technology Co. is accelerating plans for an initial public offering to as early as next quarter to capitalize on a post-pandemic turnaround, people familiar with its plans said.
Read more

Work has stopped at several U.S. meat processing plants after the world's largest meat producer was hit with a major cyberattack.
Read more

Commuters are describing a chaotic and scary scene overnight after a Northern California train flew off the tracks. The accident sent a train car into a rushing creek in a section of the San Francisco Bay area. A tree downed during a storm is blamed for knock…
Read more

Violent rainfall in southwest Louisiana left many cars submerged in floodwater on Monday, according to reports.
Read more

Ireland goalkeeper Ayeisha McFerran appeals for help to find her silver medal from the 2018 Hockey World Cup after it was stolen from her apartment.
Read more

By challenging the core primacy of EU law, Poland fuels concerns it is heading towards the exit.
Read more

Vernon Kay on Game of Talents and why ‘autocue...

After years of delay, Western Balkan states want proof the EU is serious about them joining.
Read more

A brown bear went on an eight-hour rampage that included injuring four people, entering a military camp and halting flights in northern Japan on Friday before it was fatally shot.
Read more

As the school year begins to wind down, there is a growing nationwide teacher shortage that is expected to carry into the fall. The pandemic didn't cause the shortage, but experts say it did make it worse. Meg Oliver takes a look at the shortage and what can …
Read more

Florida Congresswoman Maria Salazar applauded her state governor, Ron Desantis, after announcing that he will require schools to teach civics and the “evils of communism.”
Read more

Biden says Chauvin guilty verdict “can be a giant...

President Biden addressed the nation hours after Derek Chauvin was found guilty in the death of George Floyd. "The guilty verdict does not bring back George. But, through the family's pain, they're finding purpose. So George's legacy will not just be about hi…
Read more

An Acid Squeeze Is the Latest Obstacle Facing Giant...

Add sulfuric acid to the list of challenges facing copper miners as the world clamors for more of the wiring metal.
Read more

Four players who are considered integral to the Kansas City Royals' future will have to remain just that -- the future -- for the time being.
Read more

Lawmakers ask Air Force to ‘pause all actions’ on...

Colorado lawmakers have asked the Air Force's top civilian official to stop the relocation of U.S. Space Command from Colorado Springs to Huntsville, Ala., citing "irregularities" in the Trump administration decision....
Read more

Academy Museum Why this could be a mecca for...

After decades of wrangling this ambitious venue devoted to cinema is finally set to open.
Read more

Adriana Rivas, who lives in Australia, is suspected of kidnappings during Pinochet's rule in Chile.
Read more

Surging Rays in tight race with Red Sox atop...

It should be obvious by now: You doubt the Tampa Bay Rays at your own risk.
Read more

Chris Wallace says he still wonders what he could...

Fox News anchor Chris Wallace said this week he still wonders if and how he could have better moderated a frenetic debate last year between President Biden and former president Trump."Well, for a landlord, I'm real...
Read more

Nadia Lovell on the Markets (Radio)

Idaho did away with its Powerball lottery on Wednesday after a proposal to allow other countries to participate.Idaho's House State Affairs Committee shot down legislation that would have changed...
Read more

President Rouhani responds to President Trump after he calls for the renegotiation of the country's historic nuclear deal. Iran analyst for the Foundation for the Defense of Democracies, Behnam Ben Taleblu joins CBSN to discuss how Iran is reacting to the lat…
Read more

U_S_ special envoy for climate John Kerry says that Washington is looking into the possibility of introducing a fee on imports from countries that don’t tax heavy polluters, but cautioned that such a move could carry risks “downstream.”
Read more

Rangers striker Christopher McKee has received a four-game ban after a Scottish FA hearing into his alleged use of foul and abusive language of a homophobic nature.
Read more

A New Hampshire police chief on Wednesday issued a public apology after his police department posted a recruitment post that touted "qualified immunity" as a job benefit."The department offers many opportunities to...
Read more

Their young kids are internet sensations. It’s helping them...

When it comes to saving for college and teaching their kids invaluable social skills, some parents say influencing is changing their lives for the better.
Read more

Democrats are already skeptical that they'll be able to hit new deadlines for getting a sweeping two-part spending package to President Biden's desk as they ramp up haggling over deep divisions.
Read more

A heatwave affecting 50 million Americans is hitting the West.Widespread excessive heat warnings and heat advisories are in effect for California, Nevada, Arizona, and Utah....
Read more

The work was done in 2016 by American graffiti artist JonOne.
Read more

The Apple Sprint Event 2021 looks to be on after all.
Read more

The family bought two of the UK’s most expensive houses through offshore companies.
Read more

Google says the most searched-for term on Bing is….Google

Google is using the popularity of its search engine on Bing to try and get its $5bn EU antitrust fine overturned.
Read more

Alex Davies, 26, from Swansea, is alleged to have stayed in National Action despite it being banned.
Read more

Microsoft Teams is finally fixing one of its most...

A growing number of Senate Democrats are getting impatient with President Biden's kid-love approach to negotiating with Sens. Joe Manchin (D-W.Va.) and Kyrsten Sinema (D-Ariz.).Biden's approach has involved a lot o...
Read more

Diplomats in Vienna are discussing how the US can lift sanctions and Iran return to compliance. Also: Brazil variant drives South America covid surge, and a man is arrested over Van Gogh and Frans Hals art thefts.
Read more

Taras Nykolyn was murdered by three fellow inmates who tried to behead his corpse.
Read more

Set Sail with Captain Jack Sparrow in the Ultimate...

Two pirate worlds are now about to collide. Disney collaborated with Rare and Xbox to bring you “Sea of Thieves: A Pirate’s Life,” an exciting original story to save the pirate’s way of life alongside none other than Disney’s “Pirates of the Caribbean” legend…
Read more

MLB Network broadcaster Jim Kaat came under fire Friday when he made a slavery reference during the American League Division Series game between the Chicago White Sox and Houston Astros.
Read more

Two Black Democratic state legislators from Virginia have accused the state's Republican Party of using racist tropes after it sent out flyers depicting them as puppets hoisted in the air by handheld strings, The Associated Press...
Read more

Sen. Marco Rubio, R-Fla., is criticizing President Biden’s administration for its initial diagnosis on the causes of mass protests that broke out in Cuba on Sunday.
Read more

FAUG: Multiplayer with TDM mode is now available in...

Malta: The teenagers pulled from the sea and accused...

How three teenagers rescued from the Mediterranean Sea ended up in Malta accused of terrorism.
Read more

1 killed, at least 8 others wounded in shooting...

A shooting in Savannah, Georgia, on Friday killed one person and injured at least eight others, including a 2-year-old and a 13-year-old, police said.
Read more

The party says she has "questions to answer" after attending a lunch without civil servants present.
Read more

New US rules to protect animal farmers expected this...

The Biden administration plans to issue a new rule to protect the rights of farmers who raise cows, chickens and hogs against the country’s largest meat processors as part of a plan to encourage more competition in the agriculture sector
Read more

Presented by A Healthy Future, LLC Good Wednesday morning! There were a lot of critics of New Jerseys weed legalization law, but one of the...
Read more

No new deaths are registered as a further 250 cases of coronavirus are detected in Scotland.
Read more

In his first prime-time address to the nation, President Biden addressed the devastating coronavirus pandemic and the toll it has taken on Americans. Watch his remarks here.
Read more

A man has been arrested after allegedly murdering a woman and dumping her body into a trash can inside a storage unit, police say.
Read more

Kinzinger: Republicans who join 'America First Caucus' should be stripped of committees

Pub and shop staff: 'Please be nice to us this weekend'