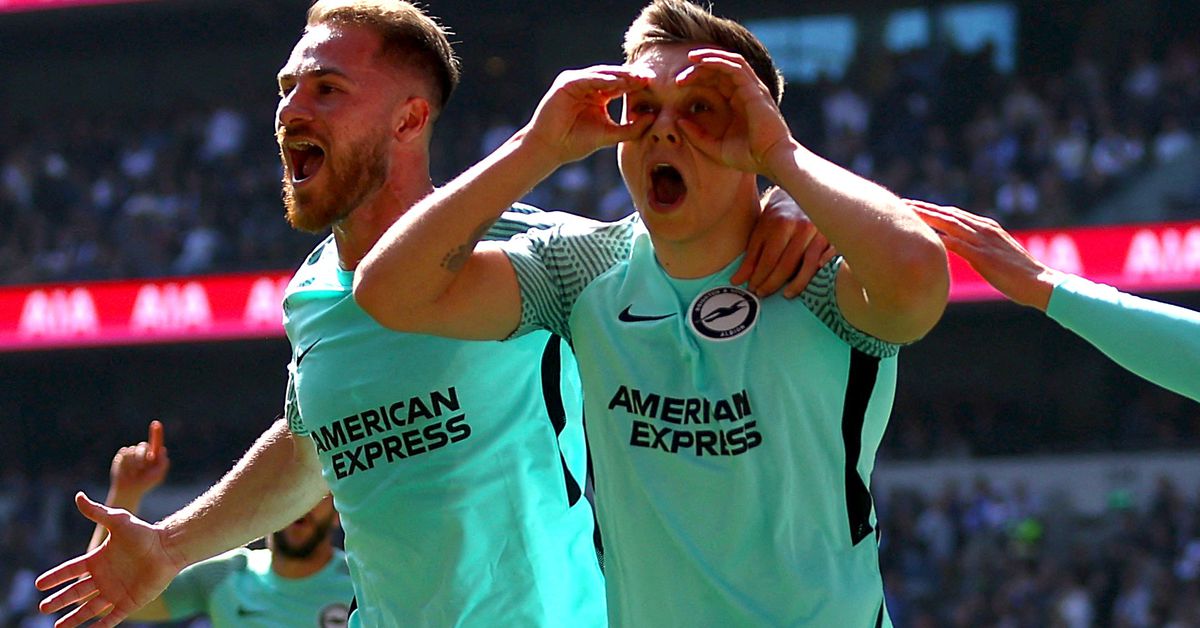 Cristiano Ronaldo scored a hat-trick for United in an unconvincing 3-2 win over Norwich City as fan protests against the club’s owners returned to Old Trafford.

With the title-chasing top two of Manchester City and Liverpool in FA Cup semi-final duty — with Juergen Klopp’s side winning 3-2 at Wembley L2N2WE073 – the focus in the league turned to the battle for the fourth Champions League spot behind third placed Chelsea.

The results leave Spurs in fourth, on 57 points from 32 games. Fifth-placed United are level on 54 points with Arsenal, who have a game in hand.

Antonio Conte’s Spurs produced a lacklustre display and looked set for a frustrating stalemate before Leandro Trossard made things even worse with a 90th-minute winner.

Trossard cut in from the left and beat Hugo Lloris with a low angled shot with the outside of his foot to end Spurs’ run of four straight wins.

Conte was disappointed but said his team needed to embrace the pressure of holding on to fourth place.

“Now there are six games to go. This race is a big opportunity for us to start to try to cope with the pressure, because when you play without targets instead, we deserve to stay in this race and go for a place in the Champions League,” he said.

Arsenal looked to be favourites for that place at the start of the month but they have now suffered three straight losses with the latest reverse coming against a Southampton side who had been winless in five.

Jan Bednarek got the decisive goal, one minute before halftime after Mohamed Elyounoussi evaded the offside trap and crossed for the defender to finish past goalkeeper Aaron Ramsdale.

Arsenal were on top for large parts of the game but came up against Southampton keeper Fraser Forster in inspired form.

“Its a really difficult one to take. The way we controlled the game makes it difficult to understand how we lost the game,” said Arsenal manager Mikel Arteta.

“We performed but didnt get a result. We need both. You have to put the ball in the net. You have to make the decisive moments count to win football matches and at the moment were not doing that,” added the Spaniard.

A first-half double from veteran striker Ronaldo seemingly put the hosts on course for a comfortable win in the sunshine, with Norwich struggling to keep pace.

However, Kieran Dowell’s goal out of nowhere in first-half stoppage time got the visitors back in the contest, before Finnish forward Teemu Pukki completed the Norwich comeback to stun Old Trafford into silence seven minutes after the break.

Fans who protested against the club’s owners ahead of the match were singing “you’re not fit to wear the shirt” in the second half as their team were second best to a team seven points adrift of the Premier League safety zone. read more

United’s France midfielder Paul Pogba was booed by his own fans as he was substituted before Ronaldo stole the show once again with a superbly taken winner 14 minutes from time.

“The results elsewhere were good. But it doesn’t make sense to look to other results. We need to raise our game,” said United’s interim manager Ralf Rangnick.

19th placed Watford slipped further towards the drop with a 2-1 home defeat to Brentford leaving them on 22 points, six behind 17th placed Everton having played two games more.

Norwich are bottom on 21 points from 32 games while 18th placed Burnley, who sacked manager Sean Dyche on Friday and are on 24 points, play at seventh placed West Ham on Sunday. Mayor announces internal probe into handling of the death...

India is facing a firestorm over ruling party officials’...

How to Persuade Europeans to Shun Russian Fossil Fuels

Chelsea: Thomas Tuchel has faith in those in charge...

High-flying Stefanik scorched by allies’ whisper campaign against a...

Missouri execution would be just fifth this year in...

“The Takeout” with Congresswoman and Selma native Terri Sewell

Pelosi warns US athletes not to risk ‘incurring the...

This Is What Happened to the Price of Nails...

Joe Biden Mentions Oil Only Once in Essay Defending...

Biden nominates 3 for Fed board, including first Black...

Saudi king admitted to hospital in Jeddah for tests...

Kramatorsk: At least 1,000 at railway station when rockets...

Why Bollywood is struggling to beat pandemic blues

Shrewsbury Castle dig to search for remains of Norman...

Key US Ports Brace for Expiration of Dockworker Union...

Red liquid thrown over Russian ambassador to Poland at...

Time of use tariffs will soon be offered to...

Ukraine: Refugees arriving in NI 'stayed as long as they could'