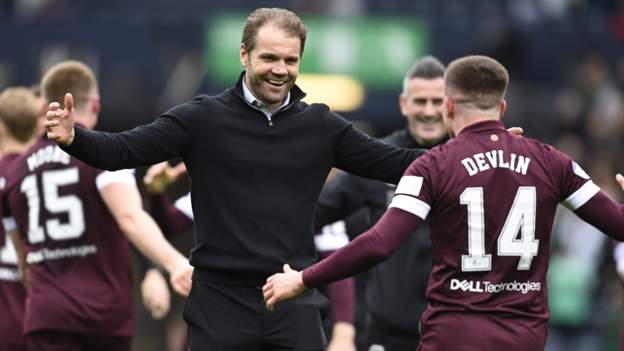 Manager Robbie Neilson urged Hearts to make a good season great by bringing the Scottish Cup back to Tynecastle.

Hearts beat Edinburgh rivals Hibernian in a fierce contest at Hampden to book their third Scottish Cup final in four seasons and secure European group stage football, having already wrapped up third place in the Premiership.

“We spoke before the game about how it’s been a good season, today has turned it into a really good season so can we now return to Hampden and make it a great season?,” Neilson said.

Ellis Simms and Stephen Kingsley put Hearts in command with two tremendous efforts from distance, but Chris Cadden reduced the deficit within 72 seconds.

Hibs pressed hard for an equaliser after the interval but were hindered by a red card for Joe Newell.

While Simms was a handful up front, fellow forwards Liam Boyce and Barrie McKay were quiet and victory was as much down to digging in and doing the dirty work as the exceptional early strikes.

Talking to BBC Scotland after the hard-fought victory, Neilson added: “It was a tough, tough game and credit to the Hearts players but also credit to the Hibs players.

“I thought they battled really well and put us under a lot of pressure, more so with 10 men, and it was a real nail-biter at the end. But that’s a derby. There were a lot of strong tackles, a lot of opportunities, thankfully we came out on top.”

Hibs came close to a second-half equaliser when Ryan Porteous’ header was remarkably pushed on to a post by Craig Gordon.

The veteran goalkeeper is in the form of his life as he approaches 40 and Neilson joked: “It’s bog standard for Craig – I expected him to catch it. He’s been outstanding this year but the rest of the players have been the same.”

Neilson is looking forward to extra funds from European football next season but insists the money will be spent wisely.

“It will make a difference,” he said. “It is guaranteed money but we have to be careful how we spend it, we don’t want to chuck it all in.

“We have to build the club gradually over the next three, four, five years to get consistent European football and try to challenge for the title.”

‘I asked the players to play on that edge’ – Maloney

While Hearts were a Championship side this time last year, Hibs were in a mirror image of their city rivals’ current position – finishing closest to the Old Firm and in the Scottish Cup final, where they would lose out to St Johnstone.

With just one league win in 2022, last weekend’s meek derby loss at Tynecastle consigned them to a bottom-six finish and this defeat ended their hopes of European football.

Under Shaun Maloney, a callow team stricken by injuries has been impotent in attack, with fans frustrated by an emphasis on possession that has been largely without purpose.

All of that went out of the window at Hampden, with Hibs in snarling mood and much better for it, although that aggression spilled over with Newell’s dismissal and Josh Campbell was lucky to avoid a similar fate.

And, for all of their commendable endeavour, a lack of menace in the final third remains a glaring problem. James Scott added physicality up front on his first start since September but has yet to score this season.

“I asked the players to play on that edge,” said Maloney. “Hearts dominated physically last week but today that wasn’t the case.

“I thought my team’s performance was excellent, as good as it’s been since I have been here. I couldn’t be more proud of them and what they gave me, going down to 10 men I thought we were the more dominant team.”

PM Update: Warm, rain-free and drier for the Fourth...

Rocket man fights Russian demand to send him back

Pope Francis to visit Lebanon in June during economic...

Break it down: Dancers begin charting path to Paris...

Tamil Nadu: The India couple who found love at...

Tennessee officials are investigating deputy’s death after being found...

Putin to meet Austrian chancellor in first face-to-face with...

The Morning After: UK competition regulator investigates Apple and...

Nothing teases phone (1) design ahead of next month’s...

US consulate in Mexico temporarily closes after coming under...

After Zambia, Kenya explores possibility of a digital currency

Nuclear Threat From Iran ‘More Advanced Than Ever Before,’...

Analysis: World Cup could be nightmare before Christmas for...