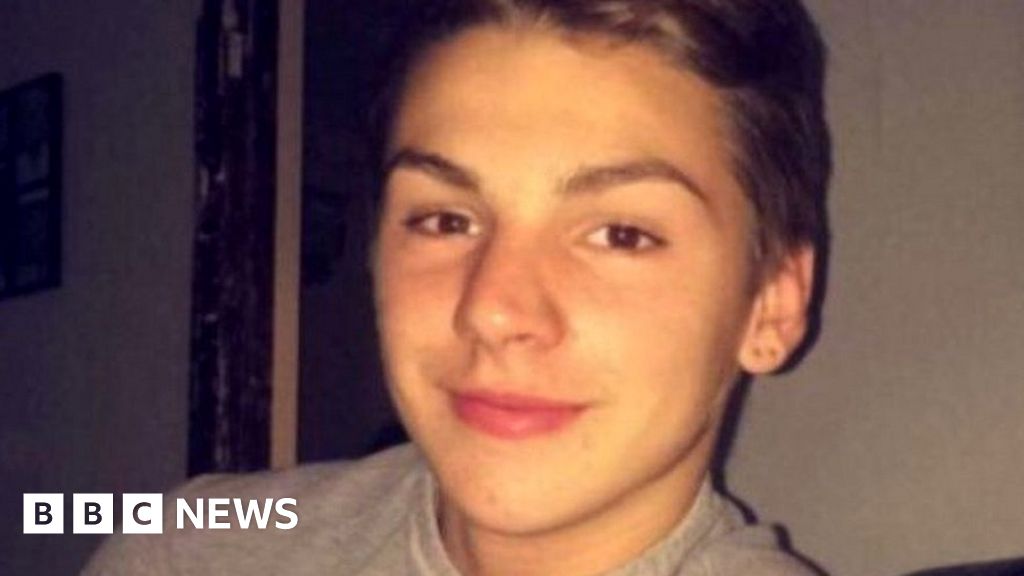 Image caption, Julie Taylor with a newly-installed bleed control kit, in memory of her grandson

The grandmother of a teenager who was stabbed to death has made it her “life’s work” to fund life-saving first aid kits so his memory will live on.

Three men were jailed for his murder.

Julie Taylor and others fundraised for dozens of public-access bleed control kits containing a tourniquet, bandages and a foil blanket, in his name, “so Liam was not murdered in vain”.

Mr Taylor and his 19-year-old friend had been standing outside the Writtle pub in 2020 when three men jumped out of a car and attacked them.

Mr Taylor – known to his family and friends as Fish – died at the scene from multiple stab wounds.

During his murderers’ trial, police said the stabbings were thought to be in retaliation to an incident earlier that evening, but neither Mr Taylor nor his friend had been involved in that.

Image caption, Liam Taylor died after being stabbed in a village near Chelmsford

His family set up the Liam Taylor Legacy crowdfunding page and that, together with other fundraising initiatives have so far paid for two defibrillators, 49 bleed control bags – which cost almost £100 each – and three bleed control units – housed in boxes, which cost about £550 each.

Public-access bleed control kits are specialist first aid kits which include several items which could potentially save a life.

Lynne Baird was instrumental in campaigning for them to be rolled out at more than 50 venues in Birmingham after her son, Daniel, 26, was stabbed to death in 2017.

Liam’s grandmother, Mrs Taylor, said: “These kits are needed so much – it’s not getting better out there – it’s getting worse.”

Image caption, Liam’s name would live on through the first aid kits, his grandmother said

She regularly speaks at events and accompanies police to schools to talk to children about knife crime, and tell the story of how her grandson was killed.

“I speak to a lot of families whose relatives have been killed in knife crimes and although people generally think you get over the loss, you don’t. In many ways it gets worse.

“The families I speak with – we understand each other.”

The bleed control bags she has bought have been distributed to pubs and community groups across Essex, and as far afield as Great Yarmouth in Norfolk and Tottenham, in London.

The latest boxed unit in Liam’s name has just been installed outside The Garrison, a pub in Chelmsford.

“We do this, and will keep doing this, because we couldn’t let Liam just be murdered in vain.

“Because of our love, he will live on forever.”

If you, or someone you know, have been affected by bereavement, the BBC Action Line has details of organisations that may be able to help UN alarm as Iran cracks down on anti-hijab protests...

This ransomware gang lets you rummage around their stolen...

You can finally stream YouTube Music on your Wear...

4 people have been charged in the Texas semitruck...

How misinformation and conspiracy theories spread along with protests...

Analysis: Bono’s new book is more than a rock...

Bobsleigh-Trinidad & Tobago’s unlikely duo rush to get up...

Afghan journalists who fled the Taliban say they’re in...

Zilliz, the startup behind the Milvus open-source vector database...

Kanye ‘arrived unannounced and without invitation,’ Skechers says, and...

Shoppers prepare for holiday season as inflation could impact...

2 symptoms are emerging as dominant in long COVID...

Fermanagh: One of NI’s biggest GP practices at risk...

Why Microsoft’s $2T+ market cap makes its $78B Activision...

How fire management can be cost-effective way to limit...

Kidney donor: I call my remaining one Home Alone...

Bosses need to accept that employees choose what the...