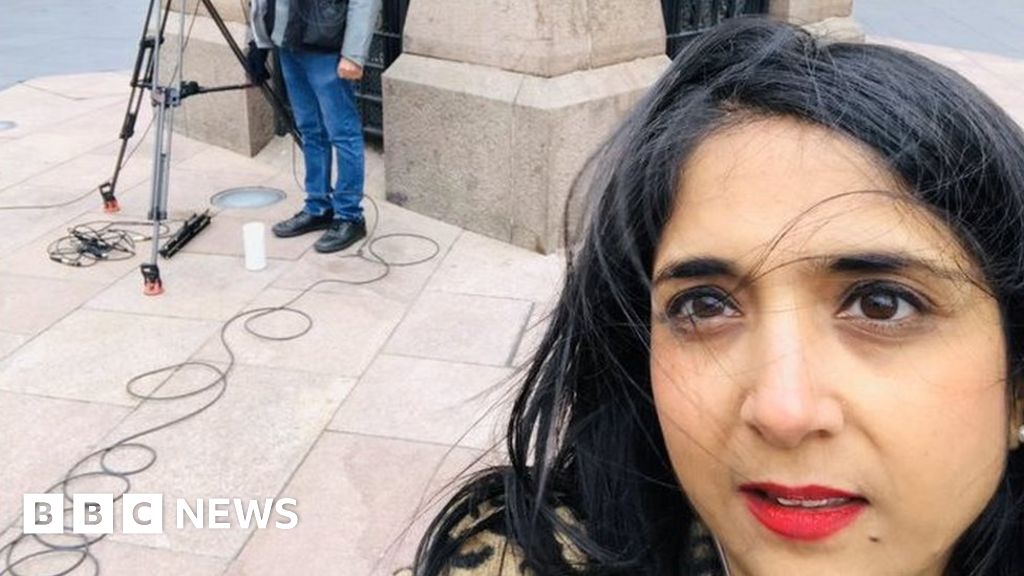 A man has admitted harassing BBC reporter Sima Kotecha as she prepared to broadcast on live television.

Russell Rawlingson, from Leicester, was originally charged with causing racially-aggravated harassment, alarm or distress, as Ms Kotecha believed his behaviour was “racist and abusive”.

However, he pleaded guilty to a lesser non-racially aggravated version of the offence.

No details were given about what Rawlingson said to Ms Kotecha when he pleaded guilty at Leicester Crown Court.

The charge was put to him as follows: “You are charged with racially aggravated intentional harassment, alarm or distress.

“On 10 May 2020, with intent to cause harassment, alarm or distress, you used threatening, abusive or insulting words or behaviour towards Sima Kotecha.”

When asked how he pleaded, Rawlingson said: “Guilty, but not to the racial.”

Apologies to our guests who we had to send home without putting on air after myself and team were subjected to racist and abusive behaviour – sad obstruction of reporting of a national crisis. Yes Im furious

However, the prosecution then said Ms Kotecha did not wish it to go to trial, and the plea to the lesser charge was therefore accepted.

He admitted having a bladed article in a public place in June.

He also pleaded guilty to assaulting an emergency worker and another charge of using threatening, abusive or insulting words or behaviour with intent to cause fear or provoke violence in October.

Ms Kotecha had been due to interview people at Leicester’s Clock Tower following a government statement on coronavirus lockdown restrictions but the segment was cancelled.

A BBC News spokesperson said: “It’s completely unacceptable that our journalists should suffer abuse for doing their jobs.

“The BBC stands by our brave and talented correspondent Sima Kotecha, her colleagues, and her guest.” The unidentified LAFD employee, who was served with a non-compliance letter from the fire department, pulled down his pants and wiped his buttocks with it, before leaving it on the ground.
Read more

Dores fire: Occupant of blaze-hit home yet to be...

Police believe the person was inside the property at the time of the fire near Loch Ness.
Read more

Search for boy seen getting into difficulty in river

The search for the boy in the River Thames is two miles from where a woman's body was recovered.
Read more

These building- and resource-based simulations are perfect for single-player fun and relaxation.
Read more

Looking at Megan Jones and Celia Quansah's Instagram, they seem to be a couple like any other - but behind the images are a duo seeking Olympic gold.
Read more

Greek composer Theodorakis to be buried in Crete

Greece's Communist Party says composer and politician Mikis Theodorakis will be buried on Sept. 9 in Crete next to his parents and brother
Read more

House Democrats to offer amendment to limit transfer of...

A pair of Democratic lawmakers is planning to introduce Wednesday an amendment aimed at restricting the transfer of military-grade weapons to local police departments.Reps. Veronica Escobar (D-Texas) and Ro Khanna...
Read more

Hard lessons for lawyers in Cosby case; tougher for...

The public outcry over Bill Cosby’s sudden release from prison, where he was serving a sentence for criminal sexual assault, was swift, with #MeToo activists worried it would have a chilling effect on sexual assault survivors
Read more

Romelu Lukaku thought he’d won it but VAR had...

France completed a famous comeback against Belgium on Thursday, overcoming a two-goal deficit to win 3-2 and reach the final of the UEFA Nations League.
Read more

The Friends Reunion Proves It’s Time to Move On

The show found a second life on streaming, but now it’s time to let it go.
Read more

Jesse Watters criticized Joe Biden for the attack at the Kabul airport that killed 13 U.S. service members, saying it was an "avoidable tragedy."
Read more

Telfar Clemens on fashion & future of the brand

Crews scramble to reach victims of deadly floods in Germany and Belgium, where hundreds are missing.
Read more

Geraldine Lee Shingoose was sent to a Canadian residential school as a child. Here's her story.
Read more

Williams have announced plans to be climate positive by 2030, as the sport advances into becoming more sustainable.
Read more

Border Patrol agents in Sierra Blanca, Texas, found dozens of migrants hiding inside a tractor-trailer at an immigration checkpoint on Thursday.
Read more

The media have been in an uproar over the U.S. Bishops’ vote to create a document on Eucharistic consistency. That phrase basically means the faithful should be consistent concerning what they believe and how they conduct their lives. Sounds simple, but the u…
Read more

Juneteenth a Paid Day Off From Work? Companies Scramble...

Juneteenth a Paid Day Off From Work? Companies Scramble to Figure Out Policiesbloomberg.com
Read more

Wynn Resorts Ltd. and Las Vegas Sands Corp. will tell vaccinated guests they can stop wearing masks. That makes the Nevada casino operators among the first companies to amend their masking and social-distancing policies following revised guidance from the Cen…
Read more

Guaranteed income for kids has arrived in America

The CTC found political will in a moment of a global crisis. Let's make sure we learn some important lessons from COVID-19 and be better prepared for what comes next.
Read more

A bloody eight-month battle for control of the Tigray region spills over into neighbouring Afar.
Read more

U.S. consumer prices rose last month at the fastest annual pace since 1990, cementing high inflation as a hallmark of the pandemic recovery and eroding spending power even as wages surge.
Read more

Tory MP Tom Tugendhat speaks of the anger, grief and rage of veterans at the "abandonment" of Afghanistan.
Read more

Glastonbury live-stream delivers a rush of nostalgia in the...

“It’s challenging to gather this intelligence and this data,” Jen Psaki said during the daily press briefing.
Read more

President Biden, a longtime Afghan War skeptic, announced the completion of the withdrawal initiated by his predecessor. The post Afghanistan: Biden Picks Up A Million Dollar Bill Trump Left on the Ground appeared first on The American Conservative.
Read more

South Korea has reported more than 2,000 new cases of the coronavirus as officials expressed concern about an erosion in citizen vigilance amid prolonged pandemic restrictions
Read more

Ten Democratic members of Congress announced on Wednesday that they have joined a lawsuit alleging former President Donald Trump and his personal lawyer Rudolph Giuliani incited the Jan. 6 riot at the U.S. Capitol.
Read more

Zillow’s home-buying debacle shows how hard it is to...

In February, Zillow appeared so confident in its ability to use artificial intelligence to estimate the value of homes that it announced a new option: for certain homes, its so-called "Zestimate" would also represent an initial cash offer from the company to …
Read more

Nissan Chief Executive Makoto Uchida has told a Japanese court that the company's former chairman, Carlos Ghosn, had held too much power, failed to listen to others, and stayed on for too long
Read more

The president of the Brazilian Football Confederation (CBF) has been removed from office for 30 days by the organisation's ethics committee, it said on Sunday.
Read more

Omar on arrest of Georgia state lawmaker: ‘Wild and...

Blake Lively has shared a touching tribute to her father, the actor Ernie Lively, following his death aged 74.
Read more

Bloomberg has retracted an incorrect article published May 5 with the headline “Zambia Shuts Seized Copper Mine as Prices Soar Toward Record (2)” because it misreported an interview with Barnaby Mulenga, permanent secretary in the Ministry of Mines. We regret…
Read more

Three riders since withdrew from the race, according to the organizers.
Read more

All 73 members of Tennessee's House Republican Caucus urged for a special session Wednesday to take action against the authority of local officials looking to impose COVID-19 safety measures, ...
Read more

Bristol are knocked out of the Champions Cup after being overpowered in a 36-17 defeat against Bordeaux-Begles.
Read more

FIFA 22 breathes new life into the series’ once-familiar gameplay with the addition of HyperMotion technology, and makes well-intentioned strides to refresh its most dated modes.
Read more

We must do better over MP standards, says Chancellor...

The chancellor says conduct rules should be "followed to the letter" amid ongoing sleaze allegations.
Read more

Progressives rally around Medicare with cuts to health package...

Progressives are closing ranks behind Medicare expansion because it represents the best chance of getting a sliver of their “Medicare for All” vision into law.
Read more

The NHL postponed three Ottawa Senators games on Monday amid an outbreak of COVID-19 within the team. Ten Senators players are currently in the league's COVID-19 protocol list, the NHL sai...
Read more

On a visit to South Africa, French President Emmanuel Macron has vowed his country will provide millions of COVID-19 vaccine doses to help African countries speed up their inoculation drives
Read more

Dim the lights for a new “Coco” scene in “Mickey’s PhilharMagic”! Beginning today, guests of the Disneyland Resort and Disneyland Paris can don their opera glasses at the fan-favorite attraction and experience the addition of the musical number “Un Poco Loco,…
Read more

Members of Ethiopia’s largest ethnic group, the Oromo, are protesting against the government and have called for the release of jailed opposition figures as they gathered for their annual Thanksgiving festival of Irreecha
Read more

The virus is spreading rapidly, with many hospitals close to collapse and nearly 300,000 deaths.
Read more

OPEC+ failed to reach a deal, abandoning its planned meeting and leaving the oil market facing much tighter supplies than had been expected.
Read more

The space agency has completed the assembly of two boosters for its "megarocket", the SLS.
Read more

The government is currently considering whether to take the broadcaster out of public hands.
Read more

The seven-day average for new daily COVID-19 infections has surpassed 100,000 in the U.S., returning to levels not seen since the winter surge
Read more

Covid-19: One in four coronavirus patients in hospital for...

Mineworkers’ Pension Scheme: Rejection a ‘slap in the face’

The government says the scheme is "fair and beneficial", despite MPs calling for a review.
Read more

Three years ago, at age 53, Peter Marshall, of Andover, Conn., was diagnosed with early onset Alzheimer's. Eventually, he not only forgot his wedding day – he forgot his wife. Lisa Marshall became just another nameless caretaker, their entire history together…
Read more

April snowstorm for the Northeast and Central US, more severe weather for...