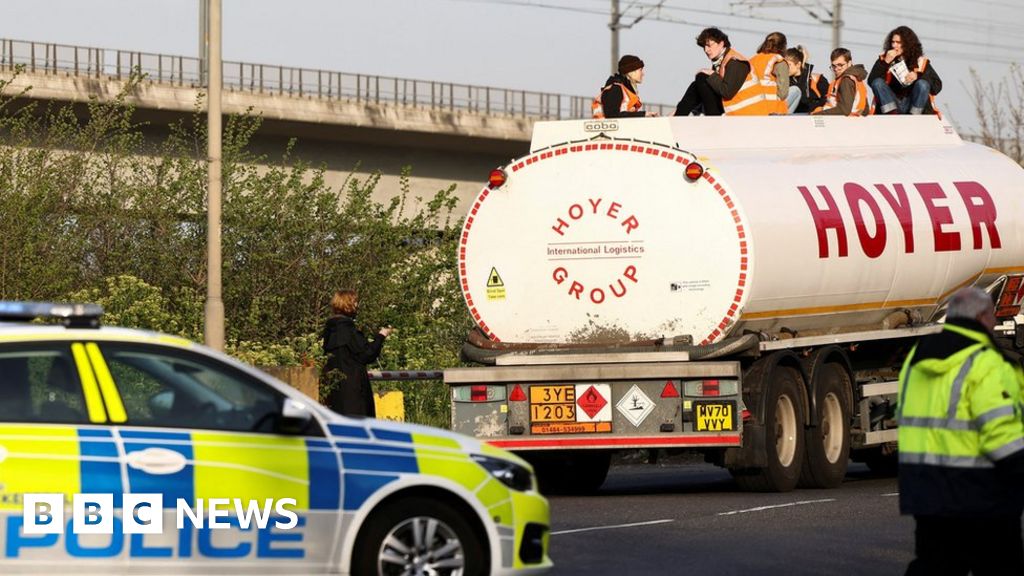 Image caption, Activists climbed on to the top of oil tankers at a fuel terminal in Grays, Essex

Essex Police said 28 were detained at the Navigator depot in Thurrock and the Grays oil terminal.

Warwickshire Police confirmed another 12 arrests at the Kingsbury depot near Tamworth.

They have been demanding that the government stop new oil and gas projects.

Image caption, Protesters from Just Stop Oil have been demonstrating in Kingsbury since April (archive image)

Demonstrators have been trying to obstruct the entrance at the site near Tamworth since 1 April and up to 29 were arrested after a protest there last weekend.

“While we will always recognise and respect the public’s right to peaceful protest we will take action against anyone who breaks the law or causes significant impact on the community.”

Essex Police confirmed the total number of arrests to date stood at 454 and that officers remained in Thurrock where a small number of protestors remained.

Assistant Chief Constable Glen Pavelin said: “Our dedicated officers will continue to work across the weekend to keep Essex moving, keep people safe and minimise disruption to the public.

“As demonstrated this week, if you come to Essex and engage in disruptive and dangerous protest, we will arrest you.”

Make this the last year that millionaires stop paying...

In photos: The bleak lives of Assam flood survivors

It’s the End of a Pokémon Era

Laura Ingraham: Hiding in Europe is preferable to coming...

LA Kings close in on playoff spot with win...

Hospitals grapple with shortage of dye used for CT...

Navarro indicted for contempt of Congress after defying Jan....

Bosch CEO warns of disruptions in event of Russian...

FA and Premier League must improve players’ education on...

The Dollar Is Up Against Every Single Major Currency...

Borderlands 3 is now free to keep on Epic...

See where abortion bans are in effect and where...

This lunar robot prototype looks like a centaur meant...

Louisiana Turns to Thousands of RV Trailers to House...

Sean Hannity: God forbid President Biden would ever give...

Why you should skip Dark Souls and play Elden Ring instead