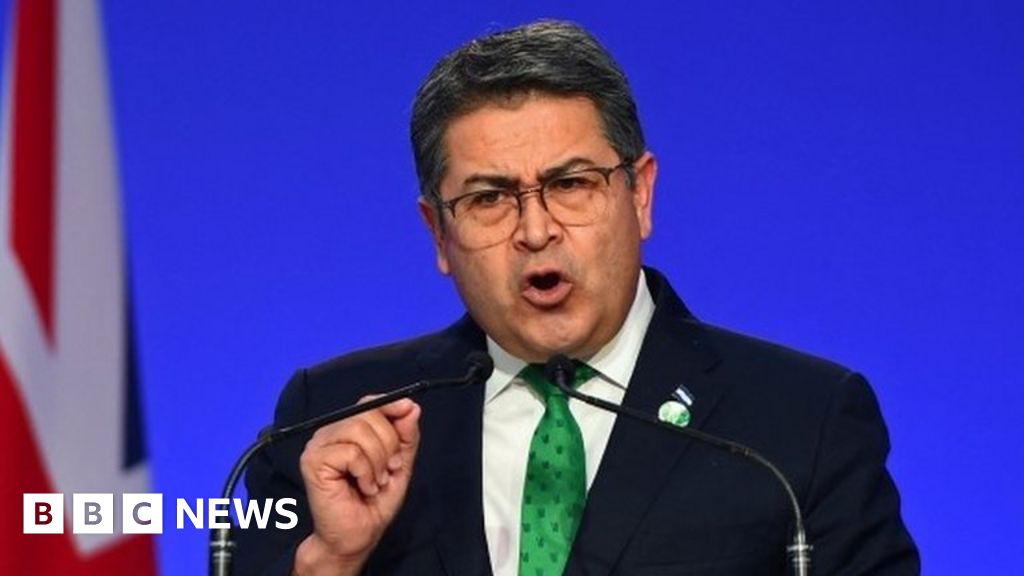 Image caption, During his arrest in February, the former president was led from his home in a bullet-proof vest

Honduran ex-President Juan Orlando Hernández is to be extradited to the United States as early as next week, Honduras’ security minister says.

Mr Hernández, who governed from 2014 to January this year, was arrested at his home in Tegucigalpa in February.

He is accused of having been involved in a drug-trafficking ring which included his younger brother Tony Hernández, who last year was sentenced in the US to life in prison.

The ex-president denies any wrongdoing.

Security Minister Ramón Sabillón said that “the extradition will happen next week (….) sometime between Wednesday and Friday”.

Mr Sabillón said the former president would be handed over to agents of the US Drug Enforcement Administration (DEA), who would take him to New York.

A judge granted the extradition request last month. An appeal against the decision lodged by Mr Hernández’s legal team was dismissed.

The former president faces three charges: conspiracy to import a controlled substance into the US, using or carrying firearms including machine guns, and conspiracy to use or carry firearms.

Mr Hernández says he is innocent and that the charges are based on information fabricated by drug traffickers who want to incriminate him in revenge for what he describes as his government’s tough anti-drug policies.

The 53-year-old has been in police custody since his arrest in February, just weeks after he was replaced by the newly elected president, Xiomara Castro.

Media caption, Watch the former president of Honduras being led away from his home in handcuffs

Mr Sabillón said he had spoken to the former president, whom he described as “worried, but co-operating”.

Juan Orlando Hernández’s legal troubles were triggered by the trial against his younger brother Tony, a former member of Honduras’ Congress.

According to the prosecutors, Guzmán told the younger Hernández to pass the money on to his brother Juan Orlando, who was running for president at the time, as a bribe.

The former president has always maintained that he did everything in his power to fight drug trafficking.

Honduras has for years been a key transit country for drugs smuggled from South America to the United States, and more recently has also become a place where cocaine is produced.

DNC hits GOP for having ‘no agenda,’ echoing Biden

Palestinians facing eviction by Israel vow to stay on...

The UFO briefings on Capitol Hill have begun. Lawmakers...

US slightly revises up its GDP estimate for Q4...

Alec Baldwin to turn in cell phone amid ‘Rust’...

SSDs could squeeze hard drives out the data center...

America needs an honest, adult conversation about our challenges...

Mexican president says he sought pardon for Assange from...

Bloomberg Wealth: Money in the Time of Inflation