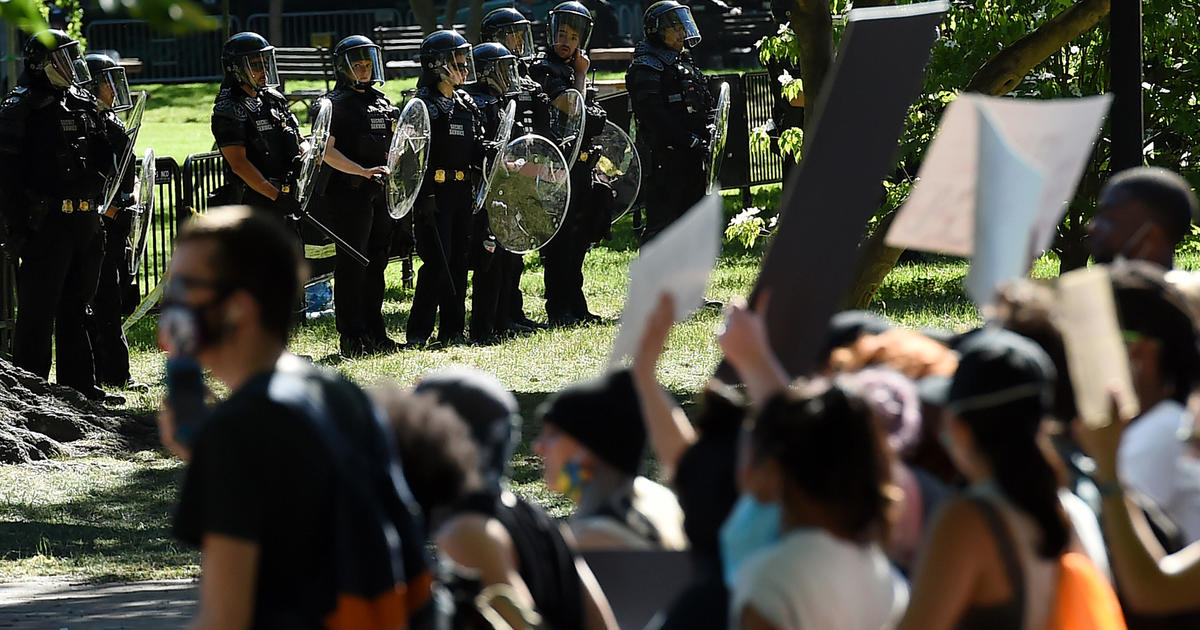 The Biden administration on Wednesday partially settled lawsuits filed by demonstrators who were forcefully cleared from Lafayette Square Park in June 2020 after George Floyd’s death. As a result, some federal law enforcement agencies will be changing how they deal with demonstrators.

Black Lives Matter D.C. and dozens of individual protesters sued the Trump administration after the U.S. Park Police and other police forces used rubber bullets, chemical irritants, and smoke bombs to clear demonstrators on June 1, 2020, before former President Trump entered the park to pose for a photo with a Bible in front of a nearby church.

As part of the settlement, the Biden administration agreed to change policies for the Park Police and the Secret Service.

The Park Police will now be required to provide audible warnings before dispersing crowds. The police force will also be prohibited from “intimidation” tactics like wearing gas masks and holding shields if these actions are not approved by a high-ranking officer.

The park police going forward also cannot revoke demonstration permits without a “clear and present danger to the public safety” or “widespread violations of applicable law that pose significant threat of injury to persons or property,” according to the 24-page settlement.

The Biden administration also agreed to “modify” Secret Service policy to underscore that use of force and dispersals “…does not normally provide blanket grounds for use-of-force countermeasures, crowd dispersal, or declaration of an unlawful assembly,” the settlement states.

The Department of Justice on Wednesday said these changes will be implemented within 30 days.

During his presidential campaign, President Biden criticized Trump for overseeing the clearing of the demonstrators.

“When peaceful protesters are dispersed by the order of the president from the doorstep of the people’s house, the White House, using tear gas and flash grenades in order to stage a photo op at a noble church, we can be forgiven for believing that the president is more interested in power than in principle,” Biden said.

Yet, a report from the Interior Department’s inspector general in 2021 stated the Park Police didn’t clear Lafayette Park so the Trump White House could stage the photo — it was scheduled in order to make room for a security vendor who needed to access the White House grounds.

CBS News reported from Lafayette Square during the June 2020 demonstration and noted the gathering was a “largely peaceful protest” before law enforcement cleared the area.

“The federal government is committed to the highest standards for protecting civil rights and civil liberties in any federal law enforcement response to public demonstrations,” Associate Attorney General Vanita Gupta said in a statement reacting to Wednesday’s settlement. “These changes to agency policies for protest responses will strengthen our commitment to protecting and respecting constitutionally protected rights.”

FILE: US Park Police stand watch inside Lafayette Square near the White House in Washington, DC on June 1, 2020 as demonstrators protest the death of George Floyd.

National Park Service Director Chuck Sams said in a statement the agency is “committed to ensuring people can gather safely to express our most fundamental and cherished right to free speech. This updated policy is designed to be accessible and understandable to both our officers and the public, further strengthening that commitment.”

In June 2020, Barr told Face the Nation moderator Margaret Brennan he made the decision in the morning of the June 1 demonstration to “increase the perimeter on that side of Lafayette Park and push it out one block.”  Barr stood by the forceful clearing of the demonstrators by law enforcement because he said 150 officers were injured. “So it wasn’t a peaceful protest,” Barr said, “We had to get control over Lafayette Park, and we had to do it as soon as we were able to do that.”

“The Trump Administration’s attack on peaceful protesters who were seeking justice for George Floyd and other victims of police violence was an appalling and unnecessary display of force,” Damon Hewitt, the president and executive director of the Lawyers’ Committee for Civil Rights Under Law, said in a statement. “The resolution of this case, while only a partial victory, is a step toward protecting the rights of not only protesters who stand up for racial justice, but also the people who are too often subjected to use of violent force by police in their communities.”

The White House and Secret Service did not immediately respond to requests for comment.

The 5 most interesting startups in this IndieBio cohort

Biden tells Zelensky that U.S. and allies will respond...

Who makes your Scottish Premiership out of contract XI?

Leaving locked down Shanghai for a ‘whole new world’...

Andy Murray aiming to be seeded at US Open...

Young Girl Crushed After Tree Collapses on Tent During...

China now has the most companies on the Fortune...

Protesters face off outside Supreme Court after breach of...

Inside The Lord of the Rings: The Rings of...

The Best Earth Day Deals on Tech, Ebikes, and...

How Arizona’s abortion ban may affect the midterms

How ‘Concealed Carry’ Gun Laws Differ by US State

7 children among at least 13 killed in apartment...

Dr. Oz  Gets a Fundraiser Held by Ex-Trump Commerce Chief...

Restrictions on outdoor events likely to be lifted

Unexpected connection between Judge Jackson and a famous civil...

Bid to ban troublemakers from trains in Scotland

Justice Department settles with protesters who sued over 2020 incident at Lafayette...