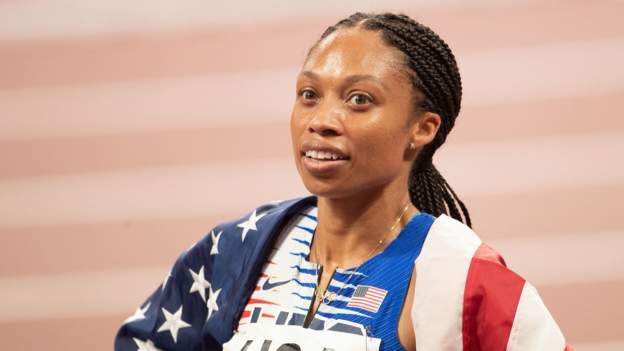 Allyson Felix, the most decorated female track and field Olympian of all time, will retire at the end of the season.

The 36-year-old American has won 11 Olympic medals, including seven golds, as well as 13 world titles.

She competed at her fifth and final Olympics in Tokyo last summer.

“As a little girl they called chicken legs, never in my wildest dreams would I have imagined I’d have a career like this,” said Felix.

“I have so much gratitude for this sport that has changed my life. I have given everything I have to running and for the first time I’m not sure if I have anything left to give.

“I want to say goodbye and thank you to the sport and people who have helped shape me the only way I know howwith one last run.

“This season isn’t about the time on the clock, it’s simply about joy. If you see me on the track this year I hope to share a moment, a memory and my appreciation with you.”

In November 2018, Felix gave birth to her daughter Camryn by emergency Caesarean at 32 weeks after discovering she had pre-eclampsia, which could have been life-threatening for them both.

Less than a year later, she became the most successful athlete in World Championships history when she took two relay golds in Doha.

That same year, she took on sponsor Nike over maternity pay. In May 2019, she wrote in the New York Times that Nike wanted to pay her 70% less after she became a mother, and three months later, the brand changed their stance.

Felix has also worked to highlight the issue of maternal mortality among black women.

“More to come on that, so stay tuned, but I’ll be sharing a series of announcements that I’m hoping will make the world better for women.

“Here’s to my final season.” Serial rapist branded a danger to women jailed for...

Closing the loopholes around “ghost guns”

These countries made the most Google takedown requests this...

ICE arrests and deportations plunged in 2021 under Biden...

Piers Morgan: Cancel culture is a form of the...

Opinion | A Four-Step Off-Ramp for Resolving the Ukraine...

Florida Man Found With Explosive Device Near Rally for...

Inside London’s only pointe shoes factory

‘I am only the UK’s sixth black female QC’

Playtime: Is it time we took ‘play’ more seriously?

American in central Ukraine providing shelter for refugees: ‘If...

Many employees still use unauthorized services to get work...

Man charged after boat driven at pod of dolphins

Everton 0-1 Wolves: Players must keep their heads up...

It’s A Celebration: Max Joseph Is Returning For A...

Not In My Back Yard, But In Yours

Racism in cricket: Government should limit public funding unless...

Juan Williams: Biden is right — GOP is on...

Cryptocurrency trends to watch in 2022