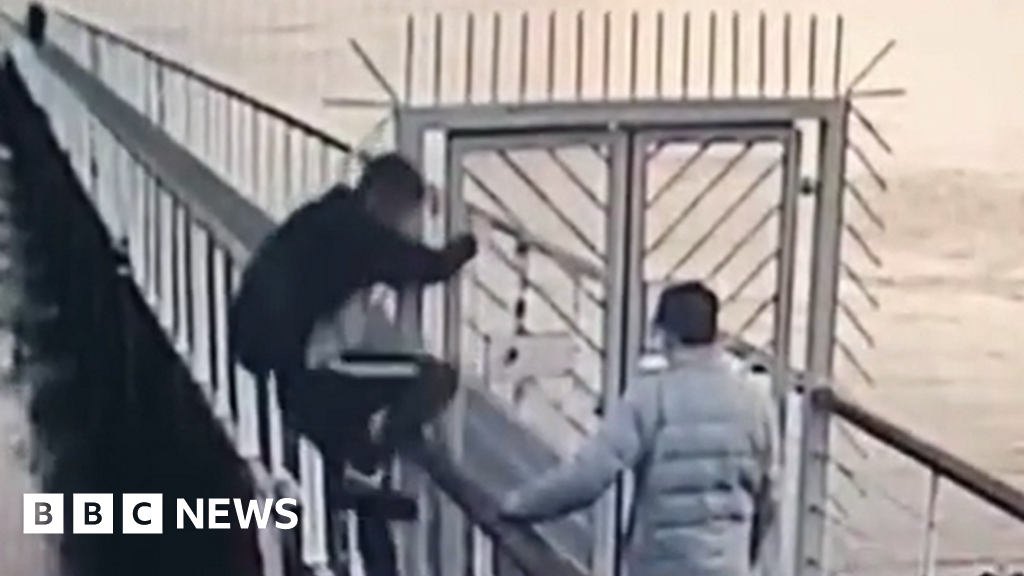 Image caption, The intruders were captured on CCTV climbing around the station’s security gate

Vandals who loosened the ropes on Broughty Ferry’s all-weather lifeboat have been condemned by RNLI volunteers.

Three youths were captured on CCTV climbing around the lifeboat’s security gate and tampering with the lifeboat.

The lifeboat station is regularly named the busiest in Scotland.

A spokesperson said: “The irony of it is that had any of the intruders fallen into the water one of the lifeboats may not have been unable to get to them on time due to this vandalism.”

The vandalism was discovered during a routine check.

The davit, which is used to lower and remove equipment from the boat, had also been tampered with.

The spokesperson added: “Such acts of wanton vandalism not only delay an emergency response from the RNLI but also have the potential for lives being lost.”

Police Scotland said it was aware of the footage and was investigating the incident. Despite an ‘unprecedented correction’, Atomico’s newest partner wants to...

Is Europe’s energy crisis just getting started? The latest...

Chris Mason: Why Labour’s leader has made peace with...

Guide to Celebrating Disney Parks Halfway to Halloween at...

Biden to announce appointees to Cancer Panel, part of...

Many families are being left behind amid economic growth

Opinion | The Wildly Misleading 2024 Speculation Is About...

Clouds might be scattering in China’s venture capital world

‘I knew Dad was dead; nobody believed me’

Fear and loathing in Aspen

TikToks with billions of views spread harmful and false...

I will help with costs where I can, says...

Then and Now, Argentina’s World Cup Overlaps With High...

Scenes of a Winter Wonderland Photos

How the White House plans to target 18 House...

Vecteezy Vs Inkscape: which is the best free Adobe...

Facebook Dating will use your face to verify you’re...

Can you dress up for Halloween without hurting the...

Security on high alert for Lula’s inauguration in tense...

Jussie Smollett scheduled to be sentenced for hate crime...

Klarna’s Sales and Losses Grow as it Builds US...

Trump fights back against DOJ in dispute over classified...