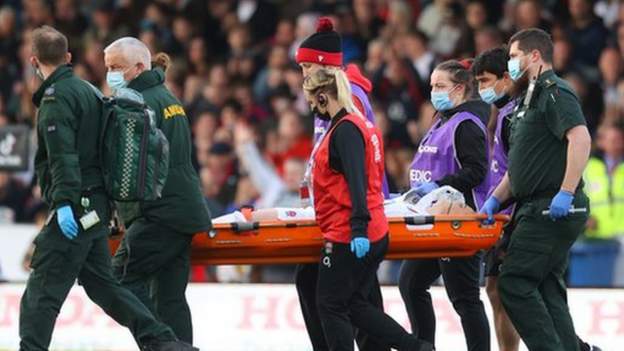 Dow cried out in pain as she went down in an awkward tackle and play stopped for more than 15 minutes in the first half as she received medical attention.

The Rugby Football Union (RFU) said “she is comfortable in hospital and will undergo surgery”.

It added it is not yet able to give a timescale for Dow’s recovery.

Centre Emily Scarratt suffered a broken leg in September and was playing again five months later, but it is not yet known whether Dow’s injury is more or less severe than Scarratt’s.

The World Cup begins in New Zealand on 8 October, with England one of the favourites to take the title.

Middleton had started Dow at full-back for only the second time in her England career and her injury further confuses the head coach’s complex back three selection choices.

Sarah McKenna, Ellie Kildunne and Emma Sing are three full-back options in the squad, while Lydia Thompson and Jess Breach are alternatives in the absence of Dow’s impressive finishing on the wing.

Former England men’s wing Ugo Monye says the Red Roses “have lost a huge weapon”, adding on BBC Radio 5 Live’s Rugby Union Weekly: “She is one of those superhuman women that the Red Roses possess. She has that level of pace, power, footwork and agility.”

The RFU added: “Everyone at England Rugby sends their best wishes to Abby and wishes her a full and speedy recovery.

“On behalf of Abby, we’d like to thank England supporters and the wider rugby family for the messages of support we have received following Saturday’s match.” EU says concerns over rule of law in Poland...

The best games to test a new PS5 headset...

Dozens of hours from upcoming docuseries…

Fed to unveil another big rate hike as signs...

Australian Prime Minister to Call National Election for May...

India to allow in imports of US pork and...

Why the US is flirting with authoritarians in countering...

Prime-time network, cable viewership for the week of Aug....

How sanctions on Russia are shaking up the superyacht...

Visitors will soon need reservations for one of Hawaii’s...

Citizens Bank CEO Says Fed Should ‘Step it Up’...

Google Pixel phones might soon get a serious search...