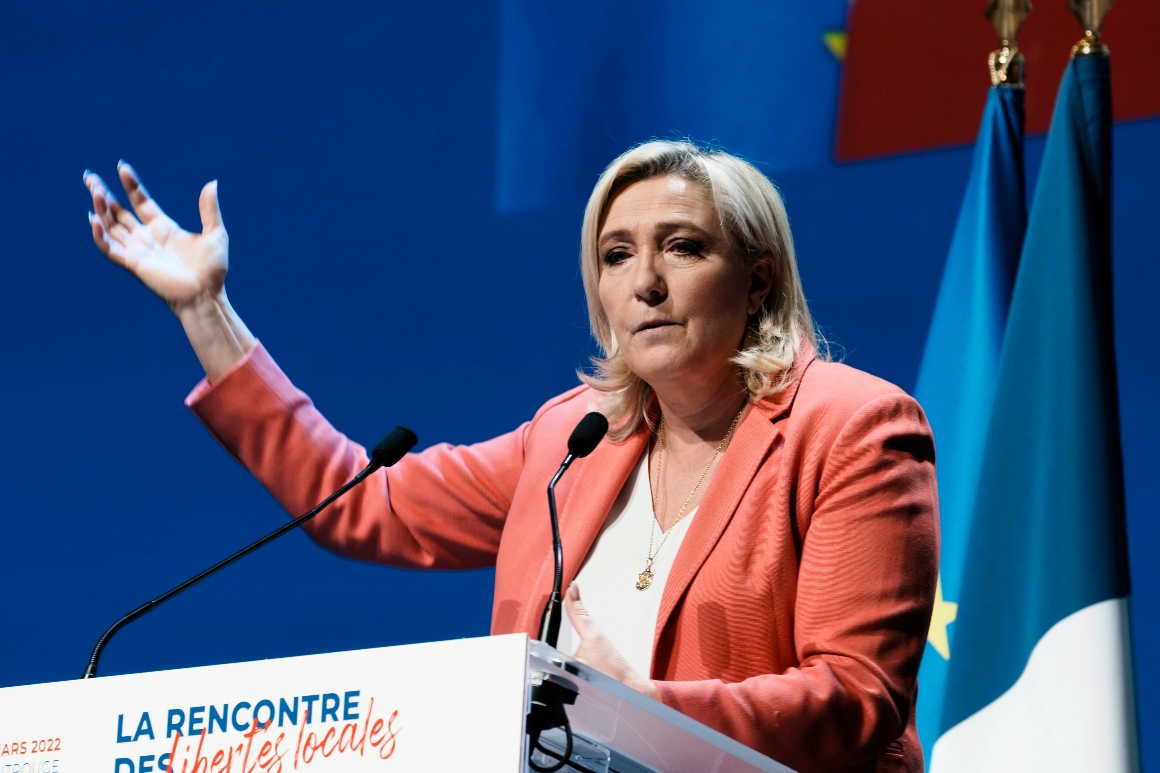 A possible victory by Le Pen, a Putin sympathizer, could destabilize the Western coalition against Moscow, upending Frances role as a leading European power and potentially giving other NATO leaders cold feet about staying in the alliance, according to three senior administration officials not authorized to publicly discuss private conversations.

Senior U.S. officials have warily watched across the Atlantic for any signs of possible Russian interference in the first round of the elections, which will take place Sunday. Polls suggest that Macron and Le Pen would likely then advance to a showdown on April 24 and that the potential two-person race would be close.

Le Pen, in her third attempt at the presidency, has surged over the past couple of weeks, as she has toned down some of her notoriously incendiary rhetoric to focus on cost-of-living issues. Millions in France are struggling to make ends meet after a 35 percent surge in gas prices over the past year.

Though Le Pen styles herself a benign populist, her campaign platform on immigration and Islam are still radical, with plans to ban the veil from all public places and stop foreigners from enjoying the same rights as French citizens. Her surname, in certain circles, is synonymous with racism and xenophobia she now fronts the far-right, anti-immigration party her father founded. And she has been an unabashed admirer of Putin, whom she met in Moscow in 2017. Though she has somewhat distanced herself from the Russian president since the invasion of Ukraine, she has spoken sympathetically of Putins rationale for war and rejected some of the Western coalitions hardline measures against Russia.

Do we want to die? Economically, we would die! she asked in a recent television debate, when asked if France should cut off oil and gas imports from Russia. We have to think of our people.

A Le Pen victory, once unthinkable, would present the European Union with its biggest crisis since Brexit, potentially triggering a slow death rattle for the constellation of countries and completely upending a continent. And in the short term, it would deeply shake the pro-Ukraine coalition that extends from Warsaw to Washington.

The worst-case scenario, according to White House officials, would be that Le Pen could win and then pull France from the coalition currently standing alongside Kyiv against Moscow. Macrons government has already walked a fine line with Moscow, with the French president attempting to play the role of mediator in the days before Putins invasion. Since then, France has supported the Ukrainians with weapons and assistance, but theyve been quiet about it, refusing to release details on what and how much theyre sending.

Washington fears that a Le Pen in the Elysee would upset this delicate balance. Her victory could then prompt other European leaders some of whom were already nervous about getting tough on Russia to bail on the alliance as well.

Some Biden aides believe that even if Macron manages a narrow re-election, it could still have a chilling effect on European leaders who may worry about their own eventual political future against populists less toxic than Le Pen. That fear may only be exacerbated if the war between Russia and Ukraine becomes a protracted conflict that lasts months and months, resulting in higher energy prices across Europe, a continent dependent on Moscow for energy.

Her election would be a disaster for Europe and the transatlantic front to support Ukraine, said Benjamin Haddad, senior director of the Europe Center at the Atlantic Council. Shes against sanctions and arms delivery, has always aligned on Kremlin talking points on Ukraine or NATO. Her platform includes leaving NATO military command and a series of anti-EU blocking measures that would de facto amount to a Frexit down the road, though she has taken Frexit off her program this time so as not to spook voters.

Former German Chancellor Angela Merkel was once viewed as Europes emissary to Putin, a mantle that has now fallen to Macron upon her exit. On the eve of war, Macron sat across Putins famous long table in an effort to avert invasion; the two leaders have spoken several times on the phone since. Macron has been criticized for engaging Putin, particularly from the president and prime minister of Poland.

Back in France, some resentment has grown that Macron who trounced Le Pen in 2017 has been far more focused on international diplomacy than domestic concerns and pocketbook issues for a country weary after grappling with a pandemic for two years. Macron tussled with the so-called yellow vest protesters, sparked at first by a gas tax and which then became a wider movement in 2018-19. Hes also never managed to shed the stigma of being a leader of Paris not France who has failed to empathize with everyday problems.

That he jumped into the presidential campaign late, confident that acting as an international statesman would guarantee a second term, is case in point for some voters.

A Le Pen win, most analysts believe, remains unlikely. In her run five years ago, polls were tight for a time before the race turned into a substantial Macron win. And when the field is narrowed to just two, she may simply become unpalatable to many voters.

But if Macron were defeated by Le Pen this time, it could put a huge crack in the transatlantic wall built by Biden and his European counterparts. After four tumultuous years of Donald Trump that badly strained traditional alliances, Biden has made a central mission to reassure Europe that it could count on the United States again. He has made three trips to Europe in his presidency including last month to Brussels and Poland to affirm those ties, and he recommitted the U.S. to the NATO alliance designed as a bulwark to Moscows aggression. The Paris-Washington dust-up over the AUKUS deal, which robbed France of a lucrative submarine deal with Australia, seems to be largely behind the Biden and Macron now.

Washington has been watching the elections and sharing information on possible Russia-based intervention, from bots to fake accounts, though most of Moscows cyber efforts right now are focused on sharing propaganda to support the war effort in Ukraine, the officials said.

The Western allies have worked largely in lockstep in putting vise-like economic sanctions on Moscow and supplying Ukraine with needed military equipment. Russias invasion has badly struggled in recent days, and Putin has already been forced to dramatically curtail his war aims.

But he would get a major boost by a Le Pen win. This time, she has focused relentlessly on economic issues, promising to reduce gas and electricity prices, and tax the hiring of foreign employees to favor nationals. But while she has toned down her rhetoric, and benefited from the presence of a candidate even further to her right, she has changed little of her platform, including measures like removing benefits from many immigrants, repudiating the primacy of EU law and closing the door on most asylum seekers.

Le Pen represents a historic threat to one of the most important democracies in Europe, Lauren Speranza, director of the transatlantic defense and security program, Center for European Policy Analysis. She has praised Putin, who is a war criminal, and depends on Russian money.

If she leads France, it will be incredibly difficult to maintain the relative unity the transatlantic community has shown so far in the war in Ukraine, continued Speranza. Her election would play directly into Putins goal of exacerbating cracks in the NATO alliance.

And she cannot dodge her previous praise of Putin. Macron has repeatedly pressed that point, telling reporters this week that he was not the candidate in the race who has shown complacency towards Vladimir Putin.

In 2017, she voiced her support for Putins invasion of Crimea and her opposition to EU sanctions in response to the annexation. If she had won that time, she pledged to lift the sanctions. Just two weeks ago, she told French TV that Putin could become an ally of France again when the war ends.

Russias not going anywhere, she explained to the French public broadcaster France 2. Ive always said that a great power can be an ally in a number of situations.

Alex Ward contributed to this report.

NRA confirms it was hit by ransomware attack

Oscars criticized for leaving Bob Saget out of In...

This Radar-Equipped Bike Warns You of Oncoming Traffic …...

UK Exports Billions of Litres of Petrol to US...

Ghislaine Maxwell to be sentenced Tuesday for sex-trafficking teen...

Aaron Rodgers Roasted Online After His Packers Lose to...

RNC votes to censure Cheney, Kinzinger for roles on...

Jena Griswold Wants To Restore Voters’ Faith in the...

Volkswagen to rely on Qualcomm chips for automated driving...

Joyce Chang on the Markets (Radio)

Some of the most important Microsoft Teams features are...

Nine Arrested after Police Clash with Protesters in London

Are these women the future faces of the NHS?

UK Exports Billions of Litres of Petrol to US

Sadiq Khan in the USA: Stage-managed mayor sticks to...

Democrats so far falling in line behind push for...

Couple Have Dream ‘Back to the Future’ Wedding After...

Homes for Ukraine: Family's 'torturous' wait for a UK visa