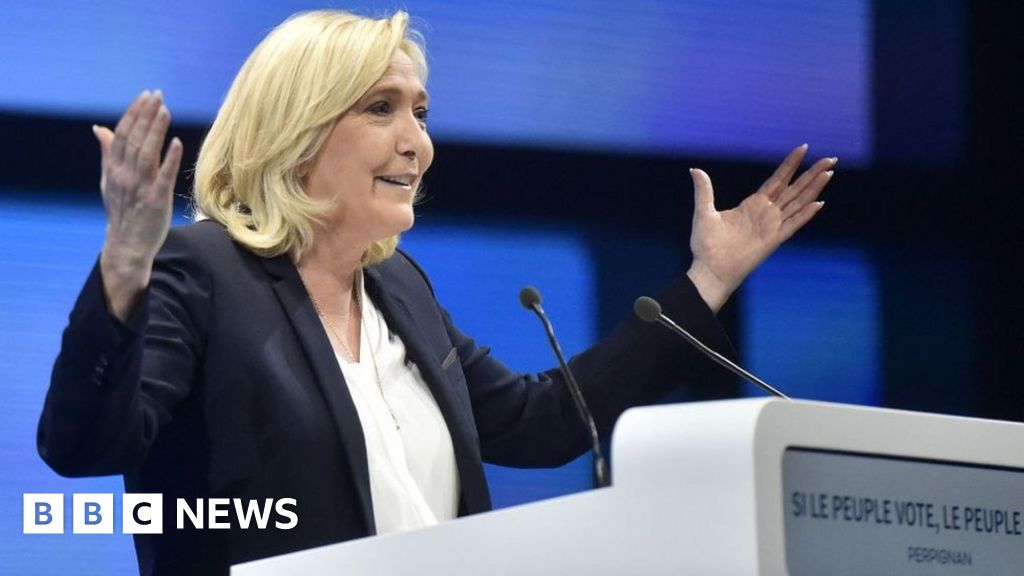 Image caption, President Macron’s big lead in the polls has shrunk as Sunday’s vote has approached

The least a president might expect, when juggling a war in Europe with an election at home, is a bounce in the polls.

But Emmanuel Macron has discovered that all the energy he spent dealing with Vladimir Putin’s war in Ukraine has been of little help in France’s unpredictable vote.

“Nothing is impossible,” President Macron has warned, as polls suggest his far-right rival is closer than ever before to winning the presidency.

A month ago, Marine Le Pen was trailing President Macron by 10 points and fighting for a place in the second round against him.

Now she’s seen as the clear favourite to challenge him for the presidency after Sunday’s first round. If she does make it through to the 24 April run-off, opinion polls suggest for the first time that a Le Pen victory is within the margin of error.

Image caption, At a rally on Thursday night in Perpignan, Marine Le Pen told voters to “take back control”

For this, the National Rally leader can thank two men once seen as dangerous for her campaign: her far-right rival, Eric Zemmour, and Russian President Vladimir Putin, now an international pariah.

“I would say that [Zemmour’s] campaign was destroyed by Ukraine,” said Gilles Paris, an election specialist for French daily Le Monde.

“His pro-Russian attitude was a burden, while Marine Le Pen was smart enough to pivot to a more moderate point of view. She was ready to accept refugees [immediately], while it took two days for Zemmour to understand that these refugees were well accepted in France.”

Mrs Le Pen has since picked up a good part of Eric Zemmour’s votes.

President Macron lost most of his “war bounce” two weeks ago, and has also faced criticism from EU partner, Poland, for talking so regularly to Russia’s president.

His frustration burst through when he was asked about it on the campaign trail this week, surrounded by crowds in the Brittany village of Spézet.

Vladimir Putin publicly backed Marine Le Pen during the last presidential race here, and her National Rally party is currently repaying a loan from a Russian bank. But she has deflected discussion of the war in Ukraine by focusing on her core campaign topic: rising prices at home.

And as the war has added to price pressures on petrol and basic goods, the Le Pen electoral strategy is continuing to pay off.

Melina, a care assistant who came to watch President Macron’s rally in Spézet this week, said the economic situation had changed her politics.

“There are a lot of French people here who work but are forced to sleep in their cars because they cannot afford an apartment and nobody helps them,” she said. “It’s a disgrace. I used to vote for the left but I could very well vote on the right this time.”

CANDIDATES: Who’s in the race to challenge Macron in France?

HOW IT WORKS: A really simple guide

At a boulangerie down the road, Sophie was serving a long queue of lunch customers.

She voted for Macron five years ago, because she was “scared” to vote for Marine Le Pen. But she’s not scared any more: Sophie is so sure Marine Le Pen will win, she has made bets with her customers on the outcome of the election.

“She has evolved,” Sophie told me. “She learns from her mistakes. She’s more human, and we understand her when she talks.”

France’s far-right leader has worked hard over the past five years to win votes like Sophie’s, softening her rhetoric and presenting a more moderate, “electable” image.

She still promises strict limits on immigration, a “French-first” policy when it comes to housing, jobs and benefits, and a ban on the Muslim headscarf in public places. But she has also dropped her plan to leave the EU, and has emphasised her personal life as a single mother who breeds kittens.

It has helped win over some traditional right-wing voters who once saw her as too extreme, and her party tainted with the toxic attitudes of its past.

But here again, said Gilles Paris, it was Eric Zemmour’s influence on French politics that has given her a boost: “He was a kind of a ‘useful fool’ [for Marine Le Pen] because he was able to bulldoze the fence that separated the majority of the right from the far-right.”

As a former journalist for a right-wing broadsheet, Eric Zemmour was acceptable to voters on the traditional right, despite policies that were often far to the right of Le Pen’s.

Once traditional right-wing voters had backed him, the theory goes, it was easier for them to switch their support to Le Pen.

Marine Le Pen has certainly gained from her far-right rival’s demise. Less than two months ago, they were neck and neck; now polls put them 15 points apart.

For President Macron, that makes it all the more urgent to secure votes from the left as well as from the centre right. But five years on from his promise to combine both the centre left and centre right in a new kind of politics, many left-wing voters are disillusioned with a man they’ve nicknamed “president of the rich”.

While Marine Le Pen has stuck to her mantra of rising prices and help for the working poor, Emmanuel Macron has made waves with his promise to raise the retirement age to 65, and link teachers’ pay to their efforts at work.

He is still tipped to win this election, and poll predictions have left Marine Le Pen disappointed on election day before. But Hervé Berville, an MP with the ruling Republic on the Move party, says there is genuine concern this time.

“Look at what happened in the last six years,” he told me. “Brexit, Trump – we’re not trying to scare people, we’re just trying to tell them the election matters, voting matters.”

Five years ago, it was Emmanuel Macron who defied expectations, and changed French politics. “Nothing is impossible,” says the 44-year-old president. He, more than anyone, should know.

A rare orchid thought to be extinct in Vermont...

Opinion | The Effing President Gets His Comeuppance

Raducanu vs Stephens live stream: watch the first round...

Supporters of Iraqi cleric Sadr storm back into Baghdad’s...

Crypto Diehards Are About to Find Out If It...

“CBS Mornings Deals”: Items that could help keep you...

3 men charged with possessing stolen manuscript for the...

The Hill’s 12:30 Report: Signs of de-escalation in Ukraine

Jewish pilgrims gather in Ukraine despite the perils of...

Arm boss: We can do it by ourselves

Update on Ukrainian refugees in Poland, talks between U.S....

The sport with the funny name that’s sweeping America

Drinks firms spooked as India refuses to exempt some...

President Biden urges Putin to engage in de-escalation and...