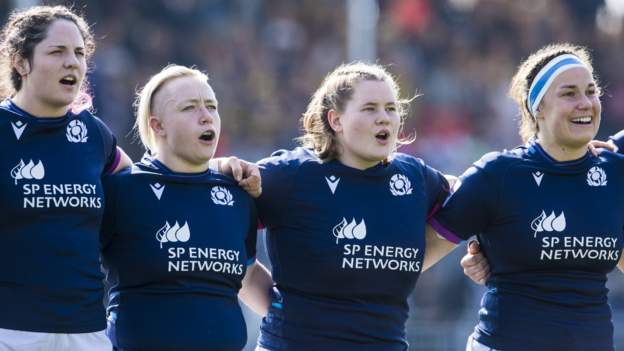 The current women’s senior national side is made up of semi-professional and amateur players.

They each receive support packages which help with travel expenses, time off work and education, but Malcolm feels more needs to be done.

“I want Scotland women to be a professional outfit,” the 30-year-old told the Rugby Union Weekly podcast.

“I want us to have the same opportunities every team has, but I want it to be done right. I think it’s super important to recognise that the infrastructure has to be right for us to be professional.”

The Loughborough Lightning flanker is currently leading Scotland through a Six Nations campaign that has started with back-to-back defeats against reigning champions England and Wales.

In aftermath of the dramatic 24-19 loss to the Welsh, Malcolm was emotional in a post-match interview.

The captain admitted she felt “silly” about her tearful reaction, but has since been overwhelmed by the support she has received.

After “an intense review” into last weekend’s second-half collapse, Malcolm adds that the defeat has been “put to bed” as Bryan Easson’s side look ahead to another tough test at home to France this Sunday – a game that will be broadcast live on BBC Scotland. Google will put domestic violence help at the top...

The Deshaun Watson settlement shows the NFL has made...

Iranian who made Paris airport home for 18 years...

How Russia’s Military Leadership Was Decapitated Thanks to U.S....

Tove Styrke is sick of the Spotify song formula

Starbucks has rolled out a new tipping system and...

US citizen accused of killing North Carolina woman while...

Ukraine Getting More HIMARS from U.S. in New Aid...

Vietnam Acquires Relic Ahead of French Auction for $3...

If Biden isn’t careful, his policies could destroy an...

Cyberpion raises $27M Series A for its external attack...

19-year-old man killed in shooting inside Mall of America,...

Jason Kidd throws shade at Chris Paul about ‘being...

Pulse of the Nation: How the year’s news is...

The Borderlands team now owns Risk of Rain, and...

Mark Kelly: ‘So important that the other states step...

Henry Cavill’s next project has been revealed – and...

Tripadvisor’s most popular destination in the world for 2022...

From Master Chief twerking at Twitchcon to the Super...

These Japanese beef croquettes are so popular there’s a...

Calls for US to Stop Arming Saudis Following Deadly...

No one asked for a hamburger vending machine, and...