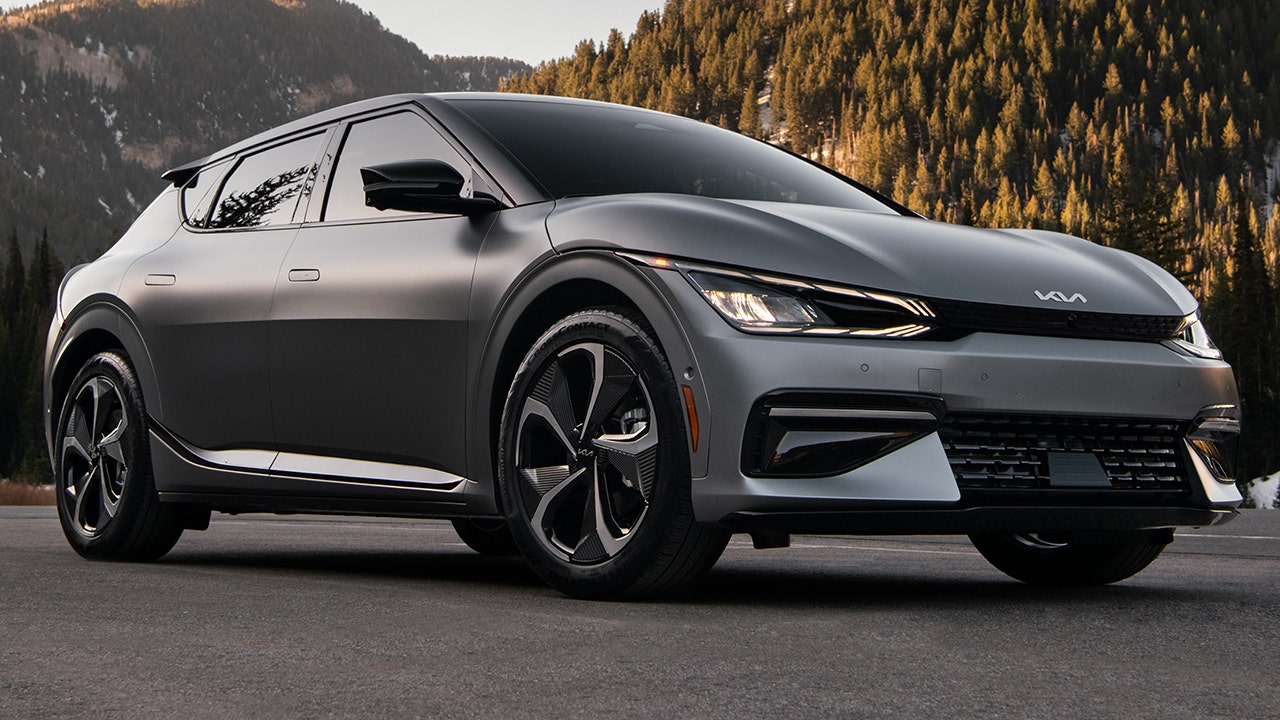 Kia is an electric automaker now. You can count on it, starting with the number six.

The Kia EV6 is an electric compact SUV

Following a couple of models that were also available with internal combustion engines, like the Niro EV, the 2022 Kia EV6 is the brands first purpose-built electric vehicle.

As the number in the name suggests, there will be plenty more to come, the next being the EV9 full size SUV, which is yet to be revealed in production form.

The EV6 is also technically an SUV, although its relatively low roofline makes the compact model feel more like a five-door hatchback car than something like a Kia Sportage, but its long wheelbase provides front and rear legroom that would put some full-size SUVs to shame.

The EV6s curvaceous styling blends classic and futuristic elements and wouldnt look out of place on an Italian car like an Alfa Romeo and its stance is similar to the Jaguar I-Pace’s. Not bad company. The raked rear roofline does cut into its cargo capacity, however.

The EV6 is equipped with dual digital displays and is trimmed with synthetic and recycled materials.

The rest of the interior is appropriately modern without being too outlandish. The plastics and synthetic upholstery give it a unique look and feel while dual widescreen monitors serve the instruments and infotainment system. There are a few welcome physical knobs and touchpad-style buttons to supplement the touchscreen controls, but some of them are multifunctional and a bit cumbersome to use.

An augmented reality head-up display uses animated graphics to give precise directions when youre using the in-car navigation system, rather than the Apple CarPlay or Android Auto smartphone integration. Neither of the latter are the wireless type, which is disappointing in a future-forward car, but the system may be updated with that capability in the future and there’s a wireless charging pad on some models that’s ready for it.

The EV6 starts at $42,115 for a rear-wheel-drive model with a small battery pack that offers a range of 232 miles between charges. An optional larger pack can increase that to 310 miles. A 320 hp all-wheel-drive system with the big battery and a 274-mile range is available, with a loaded top of the line EV6 GT-Line e-AWD like my test car checking out at $55,920. A $7,500 federal tax credit is available for the purchase of all trims.

The ranges are in the ballpark with those of similarly priced and sized electric vehicles, like the Ford Mustang Mach-E, but the EV6 can be charged more quickly than any of them (except for the Hyundai Ioniq 5, which shares its platform.) It uses an 800-volt system that can fill it from 10% to 80% in just 18 minutes at the fastest public charging systems, which is about half as long as the others need. All fast chargers slow down after 80% to help preserve battery life, so that last 20% can more than double the time if you need it.

An adapter turns the EV6 charge port into a 110-volt outlet with 1,900 kilowatts of power.

The EV6 is also equipped with a 110-volt outlet in the rear seating area and has an adaptor with another outlet that can be plugged into the external charge port. They allow you to turn the car into a 1,900-watt generator that can be used to power things remote locations or even run a home refrigerator or air conditioner for up to 300 hours on a full battery.

The EV6 cargo area is long, but short due to the roofline design.

The 4,500-pound all-wheel-drive EV6 can also accelerate to 60 mph in a brisk 4.6 seconds and does it without any fuss. The throttle response is seamless, without the clunky and funky feel some electric models still exhibit. Its also as silent as a TV on mute, but you can turn up the volume. Several digital motor noises are available including one that can be customized, but as is often the case, they all get grating after a while. I left them off after trying them a couple of times.

I never got tired of the ride quality, or tired by it. The EV6s suspension is tuned to near perfection. Its skill that remains one of the dark arts of automotive engineering and a luxury brand couldnt have done it better without resorting to computer controls and adjustable air springs. It also exhibits sharp and predictable handling when driven with a little gusto.

I mostly took it easy to see just how far the EV6 would go between trips to the plug. Unfortunately, the predicted range was never above 225 on a full charge and the efficiency meter showed I was getting under 3 miles per kilowatt-hour most of the time, which would bear that out. According to the EPA, the EV6 uses the equivalent of 105 mpg of energy in combined driving. The temperature was mostly between 30 degrees and 50 degrees while I had it, which doesnt seem cold enough to have that much of an effect, but may have. Other testers have gotten much closer to the range rating, or beaten it. Suffice to say, your mileage will vary.

Aside from that, the EV6 is simply excellent all around, and others apparently agree. It was recently named European Car of the Year and is one of the three finalists for World Car of the Year.

Is it the best car in the world? Im not sure, but I do think on the whole its the best in its class, and a winner, either way. Arizona inducing the labor of pregnant prisoners against their...

The best holiday gifts for music lovers and musicians...

Businesses including Stitch Fix are already experimenting with DALL-E...

What is the NYPD Crime Stoppers hotline?

DC Universe Infinite is finally available outside of the...

Alpine willing to loan Piastri to race for another...

Last chance: Our bring a friend for free promotion...

The debt-ceiling standoff in Congress risks creating a ‘self-imposed...

Emily Carey Talks Being ‘Scared’ of ‘House of the...

Pfizer, BioNTech to delay FDA request for vaccines for...

Man sentenced to life plus 40 years in Missouri...

Macau shuts down casinos in race to curb COVID...

Gas prices sting US workers who depend on their...

Lavrov: Russia is not squeaky clean and not ashamed

Woman found with gunshot wound to abdomen in Homewood

In defense of a college degree

Kevin Hart and The Rock Want to See These...

Hear the right way to acquire customers with Cube...