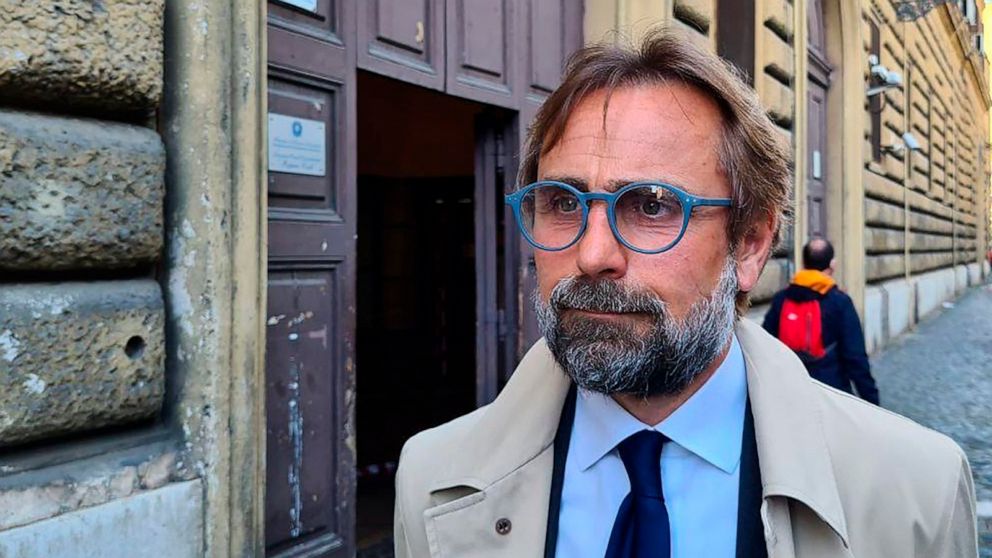 ROME — An Italian Navy captain accused of passing classified documents to Russia says he didnt have access to any information that would have compromised the security or strategic operations of Italy or NATO, his lawyer said Friday.

Attorney Roberto De Vita met with Capt. Walter Biot at Romes Regina Coeli prison, where the frigate captain and Defense Ministry policy officer is being held on espionage charges in an isolation cell, a normal procedure for new inmates during the pandemic to prevent COVID-19 outbreaks.

Biot was arrested Tuesday after Italian special operations forces allegedly caught him handing over a flash drive with 181 documents stored on it to a Russian Embassy diplomat in exchange for 5,000 euros ($5,881).

Italy expelled the Russian and another embassy diplomat for what Italian Foreign Minister Luigi Di Maio called a hostile act of extreme gravity.

A judge in Rome on Thursday denied Biots request to be released from jail and put under house arrest, citing the gravity of the accusations and the concern that he might commit further crimes.

Italian news reports quoted the judges order as saying Biots actions were not isolated or sporadic but well-planned. The judge said the evidence showed the officer used four different cellphones and had no scruples betraying the trust of his institution for economic reasons.

Defense lawyer De Vita said Biot, who initially declined to respond to prosecutors questions, was ready to provide his version of events and to demonstrate that the documents in question were of little or scarce relevance and that regardless, in most cases were already available from other sources.

He will specify how he did not have access to information that could compromise national, military, strategic and NATO operations, De Vita told The Associated Press outside the prison. Precisely because the position he held did not allow him access.

Biots relatives have said he would never betray his country. But they said he struggled to provide for his family of six and to pay his mortgage on a monthly Defense Ministry salary of 3,000 euros ($3529).

De Vita said his client was most concerned about the impact of the scandal on his family. The lawyer said the case raises geopolitical and institutional issues beyond the judicial dimension of the captain’s conduct.

He is convinced that he can reduce or put into perspective the significance of his actions compared to what was divulged and what was said, De Vita said. The papers: Royal claims to be handled privately and...

Most of Wednesday's front page lead on the Royal Family's response to Harry and Meghan's interview.
Read more

Miami-Dade police have found the vehicle used by three gunmen who killed two people and injured more than 20 during an early Sunday gathering at a banquet hall.
Read more

The Papers: ‘Covid passports’ and ‘green light for racists’

Several of Friday's papers look ahead to what the summer holidays could look like for Britons.
Read more

Canada is planning legislation to end a general strike at the Port of Montreal that’s bound to worsen congestion at other sites and add to global shipping delays.
Read more

Your Evening Briefing: The Energy Transition Will Not Be...

EuroHockey Championships: England cruise past Russia in opener as...

"I actually think you can do everything you can to drive the Japanese to the right place...we ought to absolutely do more with Taiwan. We tried to do that we made some progress. We didn't get all the way home for sure there's an awful lot of space left to the…
Read more

Gun control activist Fred Guttenberg, whose daughter was killed in the 2018 shooting at Marjory Stoneman Douglas in Parkland, Fla., on Friday called out Sen. Joe Manchin (D-W.Va.) for his opposition to ...
Read more

Investigators search the homes of two suspects and reportedly find arms at the home of one of them.
Read more

Amid rising anti-Asian racism and attacks during the pandemic, some members of the Asian American and Pacific Islander community are sharing their stories of struggles with identity and discrimination in an online newsletter called "Red Envelope Stories." Co-…
Read more

Mia Kirkland says support from followers helped her to overcome being assaulted while she performed.
Read more

Defense Secretary Lloyd Austin has rejected a request by Oklahoma Gov. Kevin Stitt that his state’s National Guard be exempt from a Pentagon requirement that all military members be vaccinated against COVID-19
Read more

The death toll from rioting in South Africa rose to 45 on Tuesday as police and the military tried to halt the unrest in poor areas of two provinces that began last week after the imprisonment of former President Jacob Zuma.
Read more

The National Security Agency has awarded a cloud computing contract worth up to $10 billion to Amazon, Nextgo...
Read more

US completes withdrawal from Afghanistan

The last US military planes left Afghanistan with troops and the remaining core diplomatic staff, the Pentagon said. Follow here for the latest news.
Read more

Harper-Lee Fanthorpe died in hospital in Stoke-on-Trent in May after swallowing a battery from a remote control.
Read more

A seventh teenager was charged for allegedly possessing a weapon in a school zone.
Read more

The South African farm turning flies into food for...

A South African company is aiming to take advantage of a new interest in protein-rich insects.
Read more

Las Vegas is bouncing back, but the virus is...

Fifteen months after the pandemic transformed Las Vegas from flamboyant spectacle to ghost town, Sin City is back
Read more

Sequoia Mulls Changes That Could Help Fend Off Biden...

Steve Schmidt, co-founder of the anti-Trump group The Lincoln Project, slammed the media for its coverage of former President Trump ending his blog, and warned that his words will “surely kill again.”
Read more

An Indian health official says the country, the world’s largest manufacturer of vaccines, wants to resume exports of coronavirus doses but can’t do so until its domestic needs are met
Read more

After receiving its first shipment of coronavirus vaccines, Ukraine found itself in a new struggle against the pandemic — persuading its widely reluctant people to get the shots
Read more

Hundreds of families in Colorado are starting the new year salvaging what remains of their homes, after Thursday's devastating wildfires. At least seven people were hurt, but there have been no reported deaths. Over 500 homes are feared destroyed. President B…
Read more

Bruno Lage is "happy" with Wolves' performance after they secured a 1-0 win against Brighton & Hove Albion.
Read more

White House: About 95 percent of federal workers have...

Federal workers had to receive their last dose of the vaccine no later than Nov. 8 to meet the deadline Monday.
Read more

A nest of the giant, invasive insects was the first destroyed in Washington this year.
Read more

The Centers for Disease Control and Prevention’s tally represents a grim new milestone in the coronavirus pandemic.
Read more

Ryder Cup: Funniest? Most competitive? Get to know the...

BBC Sport caught up with the European Ryder Cup team to find out who's the funniest, who's the most competitive and much more.
Read more

Hulu might be the home of this year's "Booksmart" with "Plan B," a bawdy coming-of-age teen comedy that also comes with a sharply incorporated message. Directed by actor Natalie Morales ("Parks and Recreation"), the edgy nature of the material shouldn't overs…
Read more

A monk, a student, an artist: Tortured by Myanmar...

Since the military took over Myanmar’s government in February, it has tortured detainees held across the country in a methodical and systemic way, an Associated Press investigation has found
Read more

President Biden will be meeting with Floyd's family​ on Tuesday at the White House.
Read more

Nic Dowd deflected in T.J. Oshie's shot from the blue line 4:41 into overtime to give the Washington Capitals a 3-2 victory over the Boston Bruins on Saturday night in Game 1 of the first-round playoff series.
Read more

This is the first such escalation between the U.S. and Iran at sea in four years.
Read more

VIDEO: Giant Anaconda Got Stuck in the Jungle After...

Officers freed the huge snake, but its belly was so bloated it could only float on the river.
Read more

West Bromwich Albion manager Sam Allardyce says "the inevitable has happened" after his side were relegated from the Premier League following their 3-1 defeat against Arsenal.
Read more

This top-of-the-line Garmin smartwatch is at its lowest price...

You cannot miss out on the Garmin Fenix 6X Pro being at its lowest price ever over at Amazon.
Read more

Famed actor LeVar Burton made his long-awaited debut as a guest host on "Jeopardy!" on Monday.Burton said during the show that he was "thrilled to have the opportunity," calling himself a "longtime viewer" who is "...
Read more

The Dell XPS 15 OLED (2021) comes with new specs and a gorgeous new screen. If you didn’t love it before, you will now.
Read more

Uefa European Under-21 Championship: All you need to know

The Uefa European Under-21 Championship starts this week. When, where, how and who?
Read more

Private expedition to dive into wreck of M/S Estonia...

A privately-funded expedition, commissioned by the relatives of the victims of the M/S Estonia ferry that sank into the Baltic Sea nearly 27 years ago, will conduct a dive into the vessel’s wreck this month
Read more

The city's mayor says more needs to be done to prevent a crisis of "filthy air and gridlocked roads".
Read more

Denmark is cracking down on crypto traders after finding that two-thirds of local transactions made using Bitcoin and other cryptocurrencies aren’t properly taxed.
Read more

Why the US needs a federal manufacturing strategy

We all need to come together — Republicans and Democrats alike — to seize this moment. We have an opportunity to secure our position as a world leader in advanced manufacturing, set the global standard for the next generation of innovation.
Read more

Both men are pronounced dead at the scene in Newcastle, and two more people are seriously injured.
Read more

Very heavy rainfall in Slovenia has caused floods in the capital Ljubljana, interrupting a theatre show and forcing hundreds of interventions by emergency crews
Read more

A new system to deal with Covid-19 in classrooms is "failing schools", a teaching union says.
Read more

Ethiopia’s duty-free export access to the U.S. has been revoked by President Joe Biden due to its failure to meet the requirements, according to the White House. The action comes after 13 months of civil war in the country.
Read more

DeSantis cashes in on rising star status with big-money...

The Florida governor's West Coast fundraising swing is stocking up his reelection campaign and making connections that could help in 2024.
Read more

Social media’s ban on Trump: Our ‘Silence of the...

You'll hear arguments from the right that the ban will hurt Mark Zuckerberg's business in a way his company will feel. But a look at Facebook's stock says otherwise.
Read more