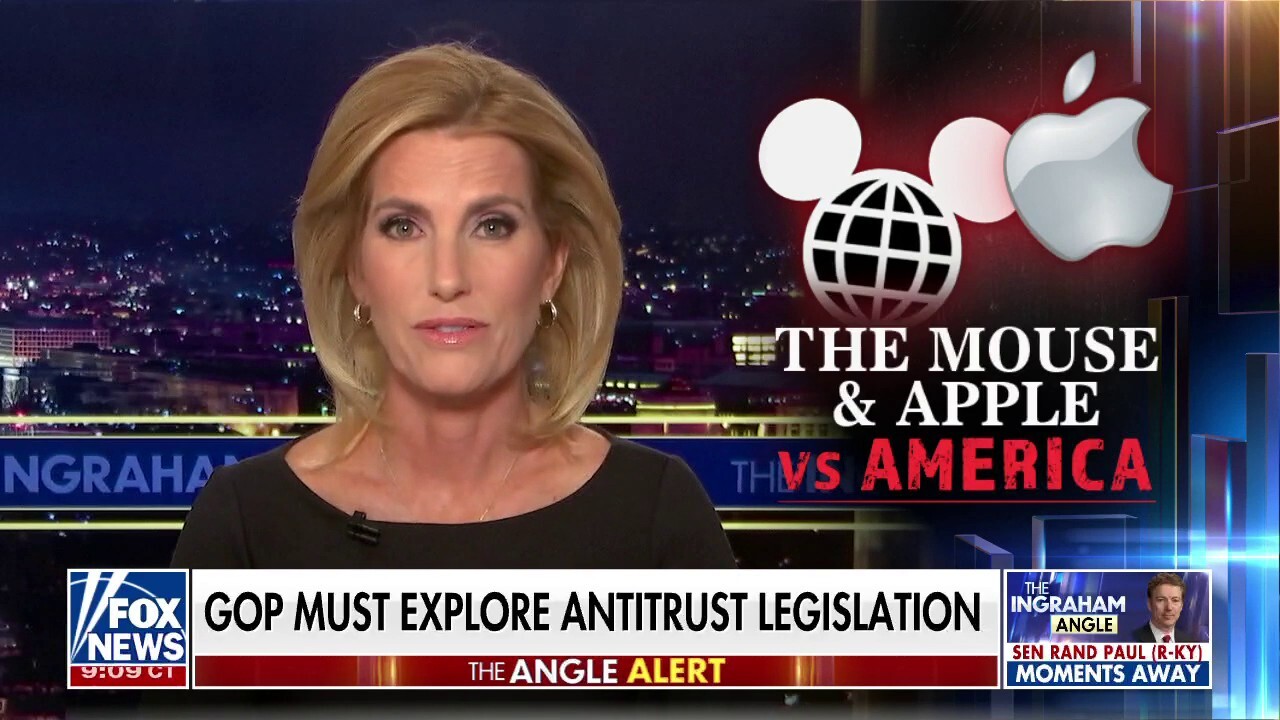 Laura Ingraham explained how Apple is using the same tactics to “mischaracterize” Florida’s parental rights bill as Disney on “The Ingraham Angle” Friday.

LAURA INGRAHAM: The Mouse and the Apple vs. America: That’s the focus of tonight’s Angle. Now it turns out that Mickey has more friends than just Minnie and Pluto. Another “Goofy” character is entering their new political alliance with the hard Left. His name is Tim Cook, the CEO of Apple, and his corporate spinmeisters employ the same tactics as Disney’s by mischaracterizing the laws that they spend millions of dollars lobbying against as anti-LGBTQ when in reality, these laws are aimed at protecting kids and women.

DISNEY HAS BETRAYED THE VERY VALUES THAT WERE RESPONSIBLE FOR ITS SUCCESS, ORTHODOX RABBIS WARN

Now, according to Politico, behind the scenes, Apple is one of the most active corporate advocates for LGBTQ rights. According to four organizers on the ground in states where legislation is moving, the company has tried to leverage its greatest assets, the popularity of its products and the size of its employee base in the U.S. to crush the legislation. First: laws such as Florida’s parental rights and education bill they’re not anti-LGBTQ. They are pro-child, and they’re aimed at protecting little ones from pre-K through third grade.

Now, we don’t call laws banning kids from driving cars “anti-automobile,” do we? Right. And laws that prevent biological males from competing against women? They’re not “anti-anything,” either. They protect girls and women who’ve often worked their entire lives to excel at the highest levels of athletics. So these common-sense measures, again being passed in states around the country, are supported by an overwhelming percentage of Americans, especially when those Americans are told, for instance, that nothing in the Florida bill prohibits the word gay from being said in school. Hong Kong’s Omicron crisis: ‘It took just 10 days for everyone to be infected’

Journalist killed in Mexico, eighth so far this year

St Athan residents ‘in the dark’ over contaminated water

Journalist killed in Mexico was threatened in recent weeks

Opinion | After Putin’s Invasion, My Country Has Shown...

Myth, magic and monsters: This photographer is creating Black...

Woman learning to drive in cemetery knocks over headstones

Review: Tim Roth drops out, in paradise, in ‘Sundown’

Calls to end Wisconsin elections panel grow ahead of...

Americans get another $100 million in federal aid for...

Omicron Sub-Variant BA.2 in South Africa May Cause New...

Oklahoma calls on state employees to substitute amid teacher...

LAPD in pursuit of an suspected stolen vehicle

US concludes violence against Myanmar’s Rohingya was genocide: report