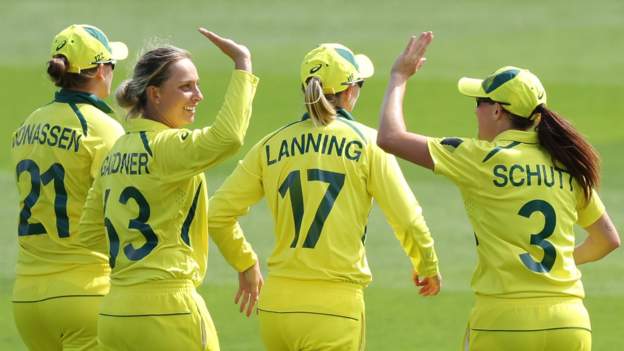 What exactly is a ‘juggernaut’?

The dictionary definition is “a massive inexorable force, campaign, movement, or object that crushes whatever is in its path”.

An alternative definition could be ‘the Australia women’s cricket team’, who can lay claim to being the best sports team in the world.

A team which have won 37 out of 38 one-day internationals must qualify as well.

This is what Australia’s women, led by Meg Lanning, have achieved from the beginning of 2018 to the semi-final of the 2022 World Cup, including a record 26 consecutive victories. England have their work cut out in Sunday’s final.

Here are the longest sequences of consecutive women’s ODI wins:

In men’s ODIs the leaders are:

In all men’s List A one-day matches (a much bigger sample of more than 28,000 matches) the most consecutive wins by any team is Australia’s 21 (as above), although they were equalled by Tamil Nadu between 2009 and 2011.

So Australia women’s 26 comfortably beats anything a men’s team have done.

Not surprisingly, Australia are well ahead of the pack in women’s ODI results since the start of 2018.

These figures do not include no-results. While South Africa have won an impressive 69% of their matches, this pales into insignificance compared to Australia’s 97%.

What has driven this run of success for Australia?

Extrapolate those numbers to 50 overs: on average they score 274 for 6.1 and concede 206 for 9.9, which is a comfortable 68-run margin and a high likelihood of bowling their opponents out.

Australia are the best in both categories, but it is with the bat where they really stand out.

The next best in the bowling metrics are Bangladesh, but Bangladesh are last in the batting metrics, suggesting they played most of their matches in lower-scoring environments.

Perhaps a better comparison, therefore, is with England, who are next in the rankings. Australia are 12% better in bowling average and 1.7% better in economy rate than England.

On the other hand, Australia’s batting is really ‘juggernauty’: they are 48% better in runs per wicket than any other team (India are second with 30.54) and 7.9% better on run-rate than next best New Zealand’s 5.06.

Their dominance in the batting department is well illustrated in their consecutive wins over India and South Africa in the round-robin phase of this World Cup.

In both matches their opponents batted first and made more than 270, a total that prior to 2022 had been successfully chased only four times in women’s ODIs.

Given this history, both India and South Africa would have fancied their chances of stopping the juggernaut. But Australia inexorably chased both targets down.

Drilling down to individual level, there are five Australian batters who average more than 40 since 2018, with a minimum of 500 runs.

The top four in that list are all in the top 10 of overall averages in that time (Haynes is 11th).

By comparison, of bowlers with 20 or more wickets, two Australians are in the top 10 of the averages: Jess Jonassen is second with 58 wickets at 14.34, just behind Pakistan’s Sana Mir, whose 34 wickets cost 14.29 apiece. Australian Megan Schutt makes 10th spot with 48 wickets at 21.83.

All of which suggests that Australia’s gameplan for ODI success is to score big runs and bowl a better than all the other teams.

When will the juggernaut stop crushing whatever is in its path…?

England happy to be underdogs in final, says Shrubsole Woman Not Giving up Her Bed for Boyfriend’s Sick...

At least two die in Russian attacks across Ukraine...

Pete Aguilar bets on the House

Biden must confront his failed policies that have lead...

Changes and cuts to income tax revealed in mini-budget

Renewed support for unions belies anti-labor laws in most...

Eleven accused of child sex ring and ‘witchcraft’ in...

IndyCar driver Colton Herta to test for McLaren this...

Sunday shows preview: US, allies up pressure on Russia;...

The EPA May Extend the Use of Pesticides that...

Greg Gutfeld: The media is distancing itself from Joe...

War in Ukraine: Life on the Kharkiv frontline

From Washington: Remembering The Bravery Of First Responders On...

DP World Tour not a feeder for PGA Tour,...

What Do Zoomers Like? Pot or Shrooms, Not Booze

Kaden Reddick died when Topshop barrier fell on him,...

‘Stop the Steal’ leader cooperating with DOJ’s investigation of...

Stocks open higher ahead of Fed decision on interest...

EXPLAINER: The federal charges against 3 cops in Floyd...