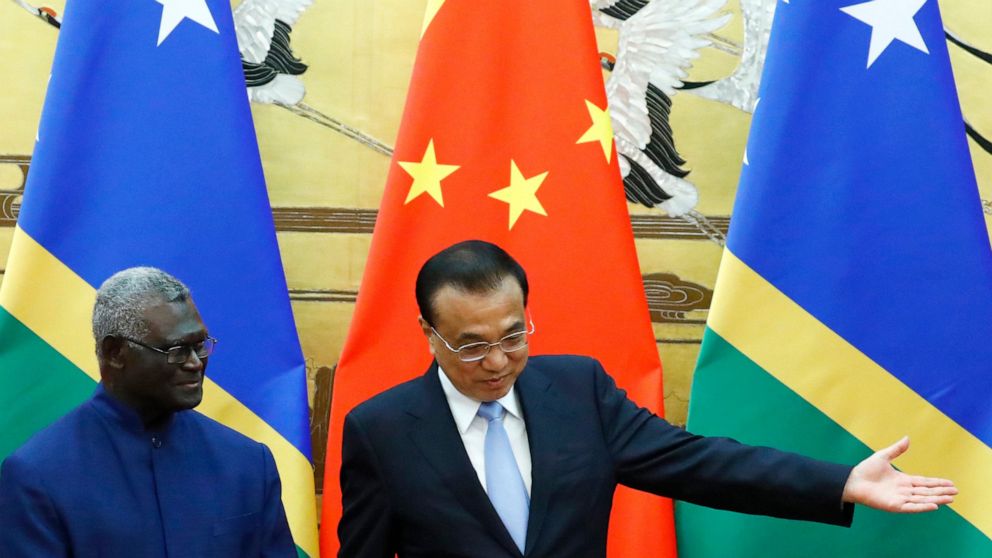 WELLINGTON, New Zealand — Seeking to counter international fears over its new security alliance with China, the Solomon Islands said Friday it won’t allow China to build a military base there.

But that insistence will do little to ease concerns about the pact from the nation’s traditional partners that include New Zealand, Australia and the United States.

The leader of neighboring Micronesia added his voice to those expressing trepidation by invoking the bloody battles of World War II and warning that the pact could again see the South Pacific region become a battleground for much larger powers.

The Solomon Islands government said Thursday a draft agreement of the new security pact had been initialed by representatives from the Solomons and China and would be “cleaned up” and signed.

In a statement Friday, the Solomon Islands government said that contrary to the misinformation promoted by anti-government commentators the agreement did not invite China to establish a military base.

Government is conscious of the security ramification of hosting a military base, and it will not be careless to allow such initiative to take place under its watch, the statement said.

The statement seemed to more emphatically rule out the possibility of a base after Prime Minister Manasseh Sogavare had earlier told parliament it had no intention of asking China to build a base.

Sogavare said his nation sought only peace and prosperity, citing its foreign policy mantra: We are friends to all and enemies to none. He said it wasn’t a secret deal but a sovereign issue.

Under the terms of the draft agreement, China could send police, military personnel and other armed forces to the Solomon Islands to assist in maintaining social order and for a variety of other reasons. It could also send warships to the islands for stopovers and to replenish supplies, which had led to speculation about the possibility of China establishing a naval base on the South Pacific islands.

He said the two small nations had become battle grounds during World War II and that it could happen again as China, the U.S. and Australia asserted themselves in the region.

And is it plausible that, once the spheres have been carved out, that our concerns about climate change todays problem would manifest into all-too-real concerns about a war in our backyards, with our people, our islands, as the playground for children playing as adults? Panuelo wrote to Sogavare.

Australian Defense Minister Peter Dutton said Friday that while it respected the Solomons’ sovereignty, the deal showed that China was acting aggressively in the region.

We need to be very cautious here because the Chinese are incredibly aggressive, the tactics that theyre deploying into small island nations are quite remarkable, he told Sky News.

New Zealand Prime Minister Jacinda Ardern this week described the possibility of Chinese military forces stationed on the Solomon Islands as the potential militarization of the region. And the U.S. State Department said Washington did not believe Chinas security forces and methods needed to be exported.

Attempts to provoke, obstruct and undermine Chinas friendly relations with the island countries is not popular and will not succeed, Wang told reporters at a daily briefing.

The Solomon Islands, home to about 700,000 people, switched its diplomatic allegiance from Taiwan to Beijing in 2019 a contributing factor to riots in November last year between residents of different islands within the country.

Australian police have been in the capital, Honiara, maintaining peace since then under a bilateral security treaty established in 2017. It provides a legal basis for the rapid deployment of Australian police, troops and associated civilians in the event of a major security challenge.

Chinese police are already on the islands conducting a training mission.

The Federated States of Micronesia is home to about 100,000 people. It has diplomatic relations and considers itself a friend of China, as well as having a close relationship with the U.S. under a compact of free association. Biden to restart talks with Manchin after ‘cooling off’...

Moderna to see approval for COVID-19 vaccine for children...

Watch: Crowd Stops Out of Control Car After Driver...

Google accused of anti-competitive behavior in $2.4B lawsuit

Security gets smart with the Ajax all-in-one alarm system

Colorado to become the first state to accept crypto...

Elon Musk is ‘untrustworthy and brilliant,’ Americans weigh in...

Endometriosis care in Scotland not meeting ‘base level’

Queen’s University may have to cut 1,500 student places...

Texas professor sues university after being punished for saying...

Workers at Starbucks Reserve Roastery in Chelsea vote to...

Trump warns ‘world war’ could be next as Russia...

Ros Atkins on… how Ukraine became the front line...

Neil Young calls on Spotify to remove his music...

US Coast Guard responds to reports of cruise ship...

Bargainers: Bipartisan deal near on trimmed $10B COVID bill