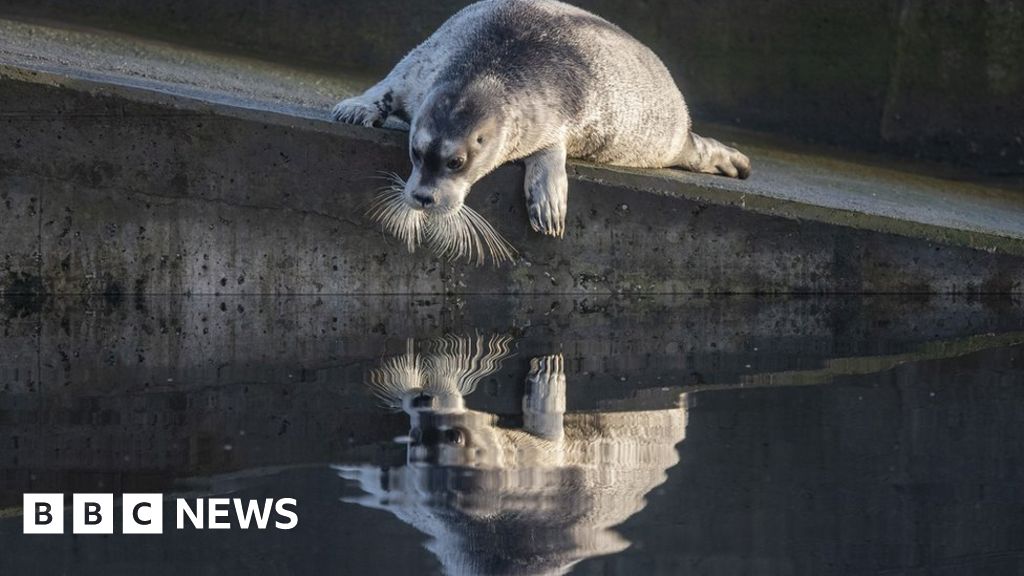 The winners of the Scottish Nature Photographer of the Year 2020 have been announced.

Edinburgh-based Charles Everitt won the botanic category and was also the overall winner with his image called Taking Root, which shows pink purslane rooted in the base of a tree.

Mr Everitt took the picture at the Water of Leith, a “wonderful little river” that starts in the Pentland Hills and flows through the city of Edinburgh.

He said: “Well managed by its own Conservation Trust, the river has become a corridor for fauna and flora as it flows through both woodland and urban environments.

“While walking in a wooded area along the banks of the Water of Leith just outside Edinburgh, I noticed a pocket of pink purslane rooted in the base of a tree beside the river. I returned the next day and was blessed with dappled sunlight so just needed to wait until the flowers became illuminated.”

Other winners included Alison Moore, of Twatt, Orkney, who won the sea and coast landscape category with her image, Magical Cave, which was taken in Orkney.

Austin Taylor, of Lerwick, Shetland, won the wildlife portrait category with a picture of a bearded seal at Shetland’s Hamnavoe Marina.

The nature video went to Paul Carpenter, from Elgin, with his film Hare Today, Hare Tomorrow?

All images are copyrighted. Cryptocurrency in 2022: looking ahead

Driver Felix Rosenqvist was carried away on a stretcher after his car headed into a tires-and-concrete barrier without braking.
Read more

Ever wanted to own a 65-inch TV for less than £500? You can right now with this incredible Amazon JVC Fire TV deal.
Read more

Wayne Rooney: How is England’s record scorer coping with...

Wayne Rooney has faced a baptism of fire since becoming Derby County boss, but how is he coping with the ongoing uncertainty surrounding the Championship club?
Read more

Why the Biggest Tech Stocks Are Cheap Right Now...

The campaign of Virginia Republican gubernatorial candidate Glenn Youngkin has clapped back after his Democratic opponent, Terry McAuliffe, accused him of “twisting” the Democrat's words on education.
Read more

He did it in the in 100 meter Butterfly semi-final. Dressel wasn't the only swimmer to break Olympic records this year, South Africa's Tatjana Schoenmaker was neck and neck with United States swimmer Lilly King
Read more

John Boyd, 77, from Norfolk has been found safe and well in the London area, say police.
Read more

Thousands of Afghans flee as Taliban closes in on...

As the Taliban takes more territory, they are also seizing the spoils of war left by retreating Afghan forces trained by the U.S.
Read more

Sheriff’s deputy overdoses after exposure to fentanyl during arrest

Tiger is still missing as mystery deepens over man...

A man who wrangled a tiger strolling in front of a Houston home Sunday has posted bond over the incident, yet the circumstances of the scene that shocked neighbors and authorities remain unclear.
Read more

"Everything this guy touches, it goes bad. That's why I said he should resign," said the Ohio Republican.
Read more

From dusty towns to forests in the West, illegal marijuana growers are taking water in uncontrolled amounts when there often isn’t enough to go around for even licensed users
Read more

Job Growth Picks Up in Sign of Progress (Podcast)

Man who was punched, kicked by Georgia officers settles...

Balance of Power: Sen. Toomey on The Future of...

Covid: Australians could face jail or fines if they...

Australia makes it temporarily illegal to return from India, which is being ravaged by Covid-19.
Read more

Litigation is already piling up before new maps are even drawn.
Read more

New York City is planning a mega-concert in Central Park to celebrate the city's reopening, after more than a year of lockdowns and restrictions amid the COVID-19 pandemic....
Read more

Hank Azaria takes the WIRED Autocomplete Interview and answers the internet's most searched questions about himself. How do you pronounce Hank Azaria? Does Hank sing? How did he get started on 'The Simpsons'? Has he been nominated for an Academy Award? Hank a…
Read more

The Los Angeles Rams shocked the NFL in the offseason when they traded for Matthew Stafford in hopes he could elevate the team back to the Super Bowl.
Read more

Why I’ve started binge-watching King of the Hill instead...

If you need a break from The Simpsons marathons, King of the Hill is the perfect alternative, with a little more in it for adults.
Read more

Biden bill would give local news outlets ‘shot in...

The two sides agreed to a cease-fire that was approved on May 20.
Read more

There was no word on when one of the Great White Way's most anticipated shows would re-open — again, and concern spread about other shows.
Read more

Athletes will need to be vaccinated — or face a long quarantine — take tests daily and wear masks when not competing or training.
Read more

Sir Antony Sher: A giant of the stage

The South African actor went from feeling like an impostor to becoming a giant of the British stage.
Read more

The biggest asset managers see customization—a blend of passive and active—as the future of investing. Or maybe it’s just the latest way to make a buck.
Read more

Israeli lawmakers to vote for next figurehead president

Good Samaritan recalls jumping from bridge to save girl,...

Michelle Obama: “Shake” your friends to turn out for...

Work has stopped at several U.S. meat processing plants after the world's largest meat producer was hit with a major cyberattack.
Read more

Biden Says ‘Most Patriotic Thing You Can Do’ Is...

In his address, Biden walked a tightrope of signaling progress in overcoming the virus while also placing emphasis on the dangers of emerging variants.
Read more

U.S. Surgeon General Dr. Vivek Murthy joins "CBS This Morning" to discuss his new advisory on how to combat the growing wave of health misinformation surrounding COVID-19 and explains why this is one of the biggest obstacles to getting Americans vaccinated.
Read more

It is a new year, but President Biden is still facing the same old polling woes when it comes to his standing among Americans.
Read more

NBA requiring Covid-19 vaccinations for referees and others who...

Less than two months ahead of the regular season tip-off, the NBA says it's requiring referees and other personnel who work with players during the 2021-22 season to be fully vaccinated.
Read more

Pope to spend a few more days in Rome...

Bill Bratton on his new memoir and the future...

Homicides increased nationwide by 24% at the beginning of 2021. Police departments across the country are bracing for the wave of violence to continue during the summer months. Bill Bratton joined CBSN to discuss the rise in crime and his new memoir "The Prof…
Read more

Polish scientists have found a gene that they say more than doubles the risk of becoming severely ill with COVID-19, a discovery they hope could help doctors identify people who are most at risk from the disease.
Read more

Zoho Expense forms part of a larger portfolio of products aimed at getting your finances in order.
Read more

Lucas Lenhoff, a quarterback at Myers Park High School in Charlotte, North Carolina, moved to the state to play after California shut down high school football amid COVID-19, according to a local report.
Read more

The Department of Justice is readying an antitrust lawsuit against Google aimed at the search giant's role in the ad tech market, multiple outlets have reported.While a filing is not imminent, ...
Read more

Ida leaves more than 1 million without power in...

More than a million customers in the New Orleans area could be without electricity for days or longer after the power system was decimated by Hurricane Ida. Omar Villafranca takes a look.
Read more

Indian drugmaker Cadila Healthcare Ltd., which expects regulatory approval for its vaccine against Covid-19 by June, will potentially ramp up capacity to 240 million annual doses as the South Asian nation races to contain the world’s fastest-growing coronavir…
Read more

Hepsiburada.com was valued at $3.9 billion in its initial public offering on Nasdaq, the first such listing on the exchange by a Turkish firm.
Read more

US construction spending up in March less than expected

U.S. construction spending bounced back in March following a February decline due to frigid cold and winter storms across large swaths of the country
Read more

Dutch charging infrastructure company Fastned (FASTN.AS) has teamed up with Tesla (TSLA.O) to build electric vehicle (EV) charging stations at a hub in the British city of Oxford, it said on Friday.
Read more

A Las Vegas-based art entertainment venue is drawing attendees, though not everyone is sure what it is.
Read more

‘If he'd murdered someone he'd be out now’ - a couple's battle to get their son out of the hospital he's been held in since 2001.
Read more

Up to nine matches could be shown on giant TV screens in central London if licensing is approved.
Read more

The president is likable, or at least hard to hate, and that lets him head the implementation of a radical agenda. The post Biden’s New Normalcy appeared first on The American Conservative.
Read more

A five-day cease fire continues in the Middle East, despite a shaky start, as talks between Israel and Hamas are happening in Cairo, Egypt. Just after the truce was annouced last night, Hamas launched rockets and Israeli forces responded with airstrikes on Ga…
Read more

India began administering booster doses of COVID-19 vaccine to frontline workers and vulnerable elderly people on Monday, with the fast-spreading Omicron variant fuelling an almost eight-fold rise in daily infections since the start of the year.
Read more

How To Add Audio Effects in ‘Roblox’ Studio: the...

To add the best audio effects to your "Roblox" experience, you will need to know the right Sound IDs. Here is the code for the "Osu" hit noise and how to use it.
Read more

Phone companies ‘must do more’ to stop fraud calls

President Biden's top medical adviser, Anthony Fauci, said on Sunday that it is a "false narrative" to think that the COVID-19 vaccine would not be needed if an antiviral COVID-19 treatment from Merck is federally a...
Read more

Licenced beavers released in Wales for the first time

Half of England Population Estimated to Have Covid Antibodies