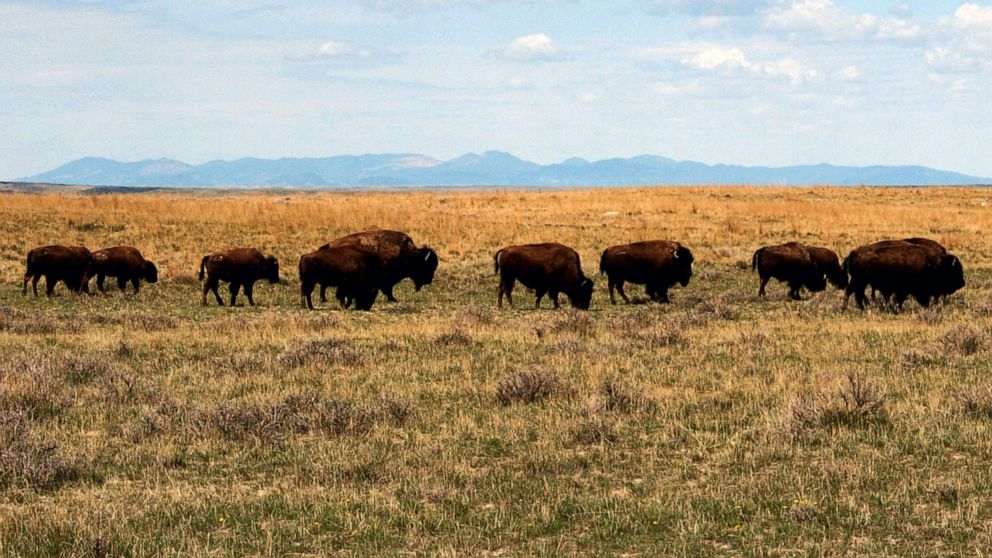 BILLINGS, Mont. — U.S. officials on Wednesday announced approval of a conservation group’s proposal to expand bison grazing on prairies in north-central Montana as part of a vast nature reserve over objections from some ranchers and elected officials.

The decision allows the American Prairie group to graze bison on U.S. Bureau of Land Management property and to remove about 30 miles (48 kilometers) of fences so the animals can roam more freely.

The Bozeman-based group already has more than 800 bison on a mix of public and private land. Its long-term goal is to piece together a 5,000-square-mile (12,950-square-kilometer) expanse that would include the C.M. Russell National Wildlife Refuge and have thousands of bison and other wildlife.

Some cattle ranches have sold property to the group as it amasses land to create the reserve, but others have fiercely opposed the effort. The critics worry that bison will displace cattle and that their agriculture-dependent communities will be forever altered.

The proposal covered about 108 square miles (280 square kilometers) south of the small community of Malta and will allow American Prairie to increase the size of its bison herd from 813 animals to about 1,000 by 2025, the group said.

It took longer than it should have, and were not naive about the politics, said reserve Vice President Pete Geddes. This has been four years and hundreds of thousands of dollars in expenses for American Prairie to do what any other rancher would have done in 60 or 90 days.

American Prairie in 2019 had scaled back its original request to graze bison across more than 450 square miles (1,165 square kilometers) following opposition from ranchers.

Massive herds of bison migrated through the region until the animals were hunted to near-extinction in the 19th century.

‘House of Cards’ showrunner is filming in Bucha to...

Creating a metaverse for the people, by the people

Hochul plays it cool as Suozzi, Williams attack in...

Ukraine: Sadiq Khan says UK should do more to...

Johnson in Balmoral to Resign as Prime Minister

Taiwan cuts COVID quarantine for arrivals even as cases...

Balance of Power: Support for Trump in 2024 (Radio)

US seizes $30 million in stolen cryptocurrency from North...

Gun applicants in New York will have to hand...

‘That is it from us here on Sunday Morning’...

Durbin cuts off Cruz as tempers flare: ‘You have...

Ted Cruz still wants to be president. Can he...

Judge indicates portions of Mar-a-Lago search affidavit could be...

A warm welcome abroad, but headline headaches at home

Transcript: Howard Lindzon on What’s Really Going on in...

HRT shortage: ‘Safe alternatives’ may be offered in Northern...

Derby out of administration as takeover completed

Average long-term US mortgage rates edge down, still over...

Texas governor pushes back on raising gun age after...

Swiss Prison Flooded With Volunteers for Three Nights in...