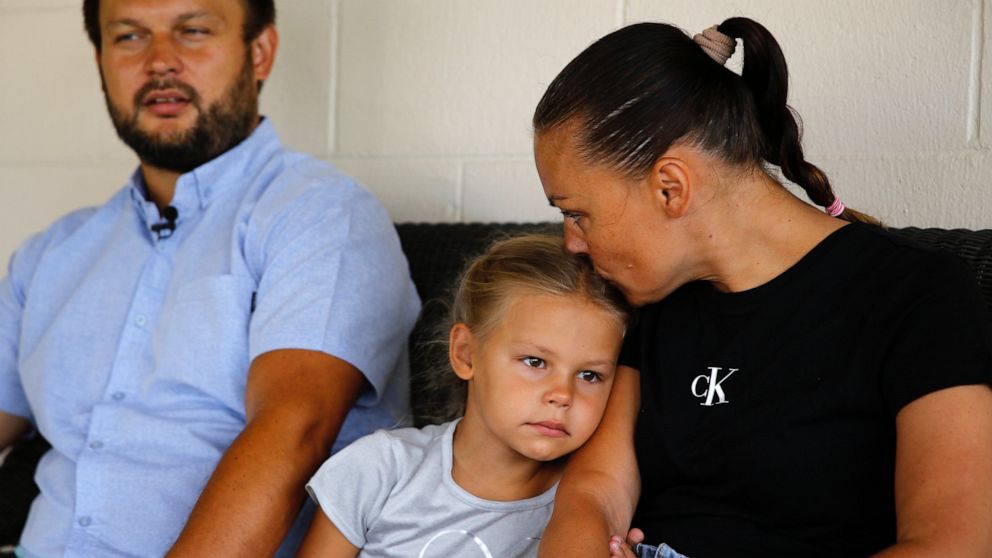 KAILUA, Hawaii — A Ukrainian family who came to Hawaii for a long-awaited vacation ended up watching from the islands in shock as bombs started dropping on their country. Now, more than a month later, they remain stranded on Oahu without access to their house, money, family or friends.

Theyve found support through the local canoe paddling community, which set them up with a place to stay and raised money online to help get them settled. They do not know if they will ever be able return to their home.

Vasyl and Marina Prishchak and their three daughters, ages 5, 10 and 16, arrived in Hawaii in the middle of February and had an idyllic, three-week beach vacation planned before Russia invaded Ukraine.

This vacation changed our life, said Vasyl Prishchak, who along with his wife owns a cosmetics company with stores in Ukraine, Russia, Belarus and Kazakhstan. We dont know how we return to Ukraine and what we will do, we will begin from zero, from scratch.

They are unsure if their house near a military base in Kyiv is still standing and say they are financially imperiled because their family business has been forced to close.

The family had been to Hawaii several times before to visit with longtime friends Borys and Beata Markin. Vasyl and Borys have been friends for about 30 years and are both avid ocean paddlers.

The community has helped the family with everything from schooling and immigration questions to financial help and a place to stay.

Until last week they were staying at a loaned home in Kailua, a beach town on the windward side of Oahu, but family friend Beata Markin said they’ve now secured a small cottage in Kaneohe where the owner is allowing them to stay free of charge for as long as they need.

They have nowhere to go, said Markin, who was born in Hungary and has lived with her Ukrainian husband in Hawaii for eight years. “I think it’s our responsibility to make sure they are OK here.”

An online fundraiser organized by canoe club members has so far raised more than $32,000 for the family.

Sadly, we cant help all the Ukrainians, but we can help this family, wrote Charlotte Johnson, an Oahu resident who helped set up the fundraiser. The banking system in Ukraine is a shambles, and they cannot access any of their accounts. None of us can even imagine going on a vacation only to find the life left no longer exists.

Globally, tens of thousands of Ukrainians were overseas when Russia invaded. In addition, the United Nations says more than 3.8 million people have fled Ukraine since the war began, the biggest movement of people in Europe since World War II.

While U.S. officials could not immediately say exactly how many Ukrainians were in the U.S. on tourism or business visas when the war began, the Department of Homeland Security expects an estimated 75,000 Ukrainians to be eligible to apply for Temporary Protected Status, which will allow them to stay in the country for 18 months.

Though the Prishchak family hopes to eventually return home, they are applying to stay under the program, which was created in 1990 to allow people to remain in the U.S. because of civil strife or natural disasters in their home countries. Permission is extended until Homeland Security deems conditions are stable enough for people to return.

The U.S. is also expanding efforts to help Ukrainian refugees elsewhere. While in Brussels to meet with European allies last week, President Joe Biden said the U.S. would admit up to 100,000 more Ukrainian refugees and provide $1 billion in humanitarian assistance to countries affected by Russias invasion.

Prishchaks oldest daughter, 16-year-old Mariia, said her excitement about vacationing in Hawaii was quickly replaced by fear for loved ones.

In the first week, they took a lot of photos, she said, but “one day we disappeared from all social media because it is no time to post these photos when people suffer.

Mariia said she had always dreamed about going to school in the U.S., but not under such terrible circumstances. She checks in with friends and family every morning and night to make sure they are safe.

Every day, I hope that next day everything will be finished, she said. And its awful. Im confused and I cant do anything else except for thinking about the situation.”

Her father said it’s difficult being in the safety of a tropical paradise while other men his age are back home fighting and not allowed to leave the country.

Its a really terrible feeling that eats away at you from inside when you understand that all your close relatives are now in a very complicated situation, the elder Prishchak said in Russian. And theres no way you can help them stop this absolute insanity. Its a feeling that simply eats you up inside, you could say. A horrible sensation, an inner guilt that Im here and not there.

The Kids Are Post-Liberal

Nevada Univ. students walk out of class in protest...

Be My Biometric Valentine (Audio)

Real Madrid ask for answers into ‘unfortunate events’ at...

Energy expert calls on Biden to ‘focus’ on solutions...

Pentagon chief orders 160 US troops in Ukraine to...

Dozens of buildings leveled after a powerful tornado tears...

Milepost: Goodbye to the Blackberry

The Future of Digital Cash Is Not on the...

Drinks group Remy confident over 2022/23 despite COVID-restrictions in...

The day Neil Armstrong landed in a small Scottish...

Rockers on Broadway drops a charity album of 12...