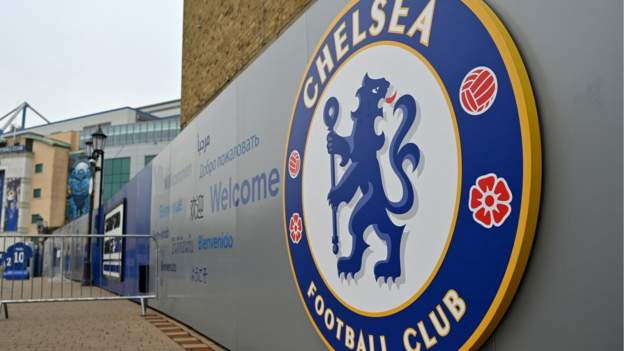 Roman Abramovich put the club up for sale on 2 March, five days after Russia invaded Ukraine

Chelsea cannot be allowed to operate as “business as usual” after sanctions were imposed on Roman Abramovich, says Sports Minister Nigel Huddleston.

Sales of home tickets and merchandise have been stopped, but the club is allowed to continue to operate.

“We’ve got to be careful of making sure there isn’t any incremental new revenue generation,” said Huddleston.

On Tuesday, the Chelsea Supporters’ Trust (CST) said it believed more changes to the sanctions needed to be made “as not to punish supporters”.

The government’s intervention was intended to prevent Russian businessman Abramovich from making any money from Chelsea and his attempt to sell the Premier League club was halted.

Abramovich put the club up for sale on 2 March, five days after Russia invaded Ukraine.

The initial sanctions – outlined in a special licence which allowed the west London club to operate – prevented any tickets being sold for Chelsea matches.

But changes to the licence last week allowed Chelsea to sell tickets to away games, cup matches and fixtures involving the women’s team.

Under the changed licence, proceeds from ticket sales will go directly to the Premier League and then be distributed to the relevant party.

“We have had constant dialogue with Chelsea fans because the whole strategy throughout is to be very, very clear that Roman Abramovich has been sanctioned and that has clearly had implications,” Huddleston said on Wednesday.

“I was very honest and open with the Chelsea fans saying ‘this will have an impact because he has been sanctioned and he is the owner of the club’.

“We have tried to make reasonable modifications to the licence to enable fans to engage with the club and continue as much as reasonably possible.

“I continue to work with the fans, but I was very clear from day one and it’s still the case – this is not business as usual.

“This is a different world because the club’s owner has been sanctioned.”

The Chelsea Supporters’ Trust has asked for supporters to be able to buy tickets for all games this season.

“The CST is deeply disappointed that we are yet to receive a response from Nigel Huddleston, Nadine Dorries [Culture Minister] or the Department of Culture, Media and Sport on important issues – including clarity on ticketing,” said the fans’ group on Tuesday.

Dartmouth names its 1st female president, to start in...

Rail Strikes May Cost Tourism and Leisure Industries Over...

Daniel Turner: We’re All Suffering Because Of The Left’s...

Warren Buffett Is Back With Berkshire Hathaway’s Biggest Takeover...

Rescuers to move whale stranded in French river to...

Eye on America: Kentucky’s tornado recovery, a homecoming for...

Why I gave a kidney to a work colleague

UK envoy arrives in Moscow in bid to ease...

Chengdu Eases Lockdown Curbs in Parts of City as...

Global Market Stress Is Piling Up. Something Is About...

‘Crazy Carl’ tones it down, sort of

What goes into the healing power of an ‘Encanto’...

Gas Prices Are Being Lowered Temporarily Across U.S. by...

U.S. Inflation Is Probably About to Spike Yet Again:...

Suspect in Salman Rushdie attack arrested on charges of...

Here’s another good reason not to download pirated software

Burnley must enjoy the highs, but stay ‘level’ –...

He was one of nation’s most revered gay cops....