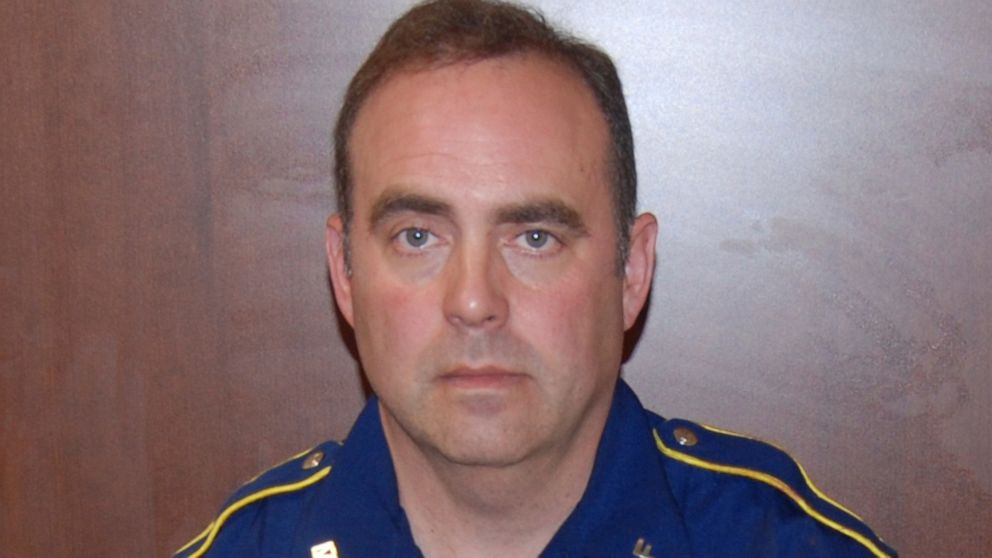 BATON ROUGE, La. — Days before his own death, Louisiana Master Trooper Chris Hollingsworth walked into a secure room deep inside state police headquarters, swore an oath and told investigators about the night he held down Black motorist Ronald Greene and repeatedly bashed him in the head with a flashlight.

Gone was the bravado from Hollingsworths earlier boast captured on body-camera video that he beat the ever-living f-” out of the man before his 2019 death along a rural roadside in northeast Louisiana.

Instead, in a two-hour interrogation, Hollingsworth meekly portrayed himself as the victim in the violent arrest, saying he feared for his life even as graphic footage played over and over of white troopers swarming Greenes car after a high-speed chase, jolting him with stun guns, punching him in the face and dragging him by his ankle shackles as he wailed, Im your brother! Im scared! Im scared!

I was scared, Hollingsworth said in the never-before-released recorded interview obtained by The Associated Press. He could have done anything once my hold was broke off him and thats why I struck him.

Detectives werent buying it, describing the repeated flashlight blows to Greenes head as unjustified while peppering the 46-year-old veteran trooper with questions. Why did Hollingsworth turn off his body-camera video recorder? Why did he jolt Greene with his stun gun before the motorist could even get out of his car? Why did he resort to disproportionate force with an unarmed man who was hardly resisting?

As for troopers initial account that blamed Greenes death on injuries from a car crash, fueling allegations of a cover-up, Hollingsworth said he didn’t see such injuries himself but added, “Im not a doctor.

Nearly three years after Greenes May 10, 2019, death with still no one criminally charged, Hollingsworths internal affairs interview in September 2020 stands as a defiant, haunting voice from the grave.

Widely seen as the most culpable of the half-dozen officers involved, Hollingsworth cant face justice because he died just six days after the interrogation from a high-speed, single-vehicle, crash that came hours after he was told he would be fired for his role in Greenes arrest.

Though his death was ruled accidental, Hollingsworths early morning, off-duty crash into a highway guardrail in Monroe prompted widespread speculation the trooper took his own life. Hollingsworth was sober, not wearing a seatbelt and was a state police driving instructor traveling an interstate he had patrolled for decades. Crash reconstruction experts who reviewed case reports for the AP agreed the circumstances were suspicious and the probe by local police was inadequate.

Its definitely consistent with a suicide but I dont have enough information to say he didnt fall asleep, said Jonathan Cherney, a California-based crash reconstructionist. But Ill tell you what, you have a hard time falling asleep when youre doing 100 miles per hour.

Scott Wolleson, the lawyer who accompanied Hollingsworth to the interview and now represents his widow in a civil suit brought by Greenes family, declined to comment.

Intentional or not, Hollingsworths death has complicated ongoing federal and state investigations and was particularly painful for Greenes mother, Mona Hardin, who says it robbed her of any hope for full justice while the trooper was allowed to be buried with full honors despite his misconduct.

It hurts me to the core that Hollingsworth isnt here, Hardin told AP. He was front and center and they gave him all the bells and whistles on his burial. … They overlooked what he did, what he confessed to.

State police were so concerned about unruly groups and a major disturbance at Hollingsworths funeral, according to operational plans obtained by AP, that they kept the location of the services secret and deployed two counter snipers and a SWAT team to watch over the sea of blue uniforms that piled into a West Monroe church.

The bristling security was set up at a time when the public had not yet the seen the body-camera footage of Greenes arrest, but the state police leaders coordinating his funeral had.

Serving as platoon leader that day was Lt. John Clary, the highest-ranking officer at the scene of Greenes death who remains under federal scrutiny for allegedly withholding his own body-camera footage from detectives.

AP last year obtained and published the graphic footage that officials from Democratic Gov. John Bel Edwards on down had refused to release for more than two years. But even before that, Hollingsworth made himself a focus of the Greene investigation by his own words on the night of the arrest, what he dismissed to detectives as inappropriate cop talk.

I beat the ever-living f— out of him, choked him and everything else trying to get him under control, Hollingsworth told a fellow officer in a phone call picked up on his body-camera mic. “All of a sudden he just went limp. … I thought he was dead.

Greene died before his ambulance reached the hospital. Hollingsworth was photographed there with flecks of Greenes blood dotting his blue uniform and brass badge.

The governor later told police commanders to investigate Hollingsworth’s role in the deadly arrest. Edwards’ top lawyer, Matthew Block, told AP the then-head of the state police informed him when the decision was finally made to fire Hollingsworth. Edwards has since come to describe the actions of the troopers in Greene’s arrest as criminal and racist.

Asked late last year whether he feels any responsibility for the loss of public trust in state police, a spokesperson for Edwards told AP: The troopers on the scene particularly Trooper Hollingsworth are responsible for what happened the night of Mr. Greenes death, period.

Federal prosecutors have been considering for months whether to charge the other troopers, including Kory York, who remains on the force after dragging Greene face down by his ankle shackles. The FBI also is investigating whether state police brass obstructed justice in part by rebuffing the detectives who pushed for criminal charges. One supervisor recently told a state legislative committee probing the case that his bosses instructed him not to give prosecutors the body-camera footage of Greene’s arrest.

That was consistent with an AP investigation last year that found Greenes was among at least a dozen cases over the past decade in which state police troopers or their bosses ignored or concealed evidence of beatings, deflected blame and impeded efforts to root out misconduct.

Hollingsworth himself seemed to recognize his legal risk, refusing to provide any statement to the detectives conducting the criminal investigation in the days after Greenes death.

But he was compelled 496 days later to cooperate with an internal affairs investigation focused on whether he violated state police policy. That inquiry could not be used to charge Hollingsworth but would determine whether he kept his badge.

Hollingsworths story evolved significantly during the interview. He initially told detectives he struck Greene with a closed fist. Then he claimed he couldnt remember whether he struck him with an object.

Finally, after the investigators replayed the video and pointed out Hollingsworths flashlight, he conceded to hitting Greene with it, even using his water bottle to demonstrate how he swung with the rounded edge down.

Detectives then showed Hollingsworth autopsy photos and asked him to describe several cuts on Greene’s head.

You dont think your flashlight caused those cuts?

It could have, the trooper said.

A reexamined autopsy commissioned by the FBI last year rejected the crash theory and attributed Greenes death to physical struggle, troopers repeatedly stunning him, striking him in the head, restraining him at length and Greenes use of cocaine.

Asked to justify his use of force, Hollingsworth repeatedly exaggerated Greene’s threat and resistance.

I did fear that he was much bigger than I was and much stronger,” he said. “He had already kept two troopers from being able to handcuff him, and I was in fear at that time of him getting control of me or headbutting me.

Race did not come up in the interrogation but Hollingsworth opined on the subject decades earlier in a 2002 essay at the Louisiana State Police Training Academy, writing that white police officers have to prove they are not racist on every complaint and in every court case involving blacks.

Today, the first concern is if the officer is white and the suspect is black. … Race is the issue and not the crime. Jobless claims fall by 17K for fourth decline in...

GM to offer electrified Corvette as early as next...

Escaped cat back with family after weeks of avoiding...

Dogs get their day at Hindu festival dedicated to...

The same day he wielded a huge layoff ax,...

Picture Limitless Creativity at Your Fingertips

Man in court accused of murder and attacks around...

Turner Prize 2023 to be awarded at Towner Eastbourne

Shannon Bream on Protests Over SCOTUS Draft Opinion on...

Texas lost to Alabama again, but this time it...

Dramatic details you may have missed from Thursday’s Jan....

The Morning After: Louis Vuitton’s showy smartwatch has a...

In Japan, Biden to launch economic plan for region...

Groupon cuts over 500 staff as the downturn takes...

Yard Act Says It’s Not All Bad (Just Most...

Adidas will continue to sell Yeezy designs under a...

‘The Wrath of Khan’ is getting an official Star...

‘Get your boy Elon in line’: NASA tell-all recounts...

Former Nintendo President on a Life of Leadership (Podcast)