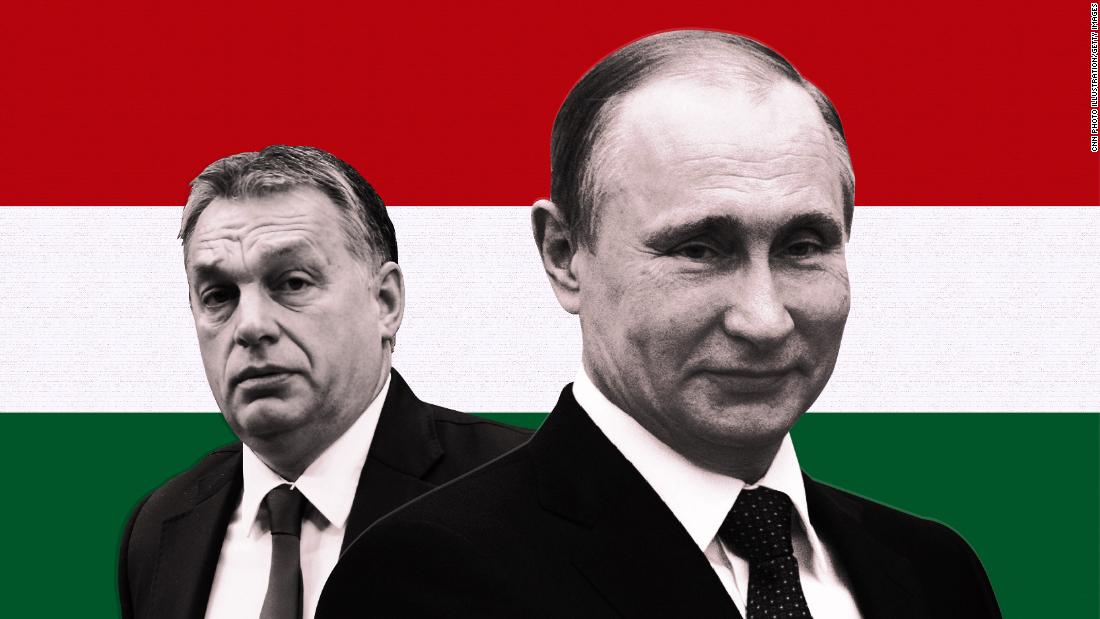 Ruth Ben-Ghiat (@ruthbenghiat), a frequent contributor to CNN Opinion, is professor of history and Italian studies at New York University and the author of “Strongmen: Mussolini to the Present.” She publishes the newsletter Lucid on threats to democracy. The views expressed here are her own. Read more opinion on CNN.

(CNN)”Lithuania stands for us. Latvia stands for us.” In a video speech to European Union leaders on Thursday, Ukrainian President Volodymyr Zelensky listed the countries that have shown solidarity with his people. Then he came to Hungary, and his tone changed. “Hungary…. I want to stop here and be honest. Once and for all. You have to decide for yourself who you are with. Listen, Viktor, do you know what’s going on in Mariupol?”

Zelensky’s comment referenced the juggling act Hungarian Prime Minister Viktor Orbán, who faces parliamentary elections on Sunday, has performed since Russia’s war on Ukraine began just over a month ago.

Russia’s war on Ukraine has come to symbolize the global conflict between autocracy and democracy, and the upcoming elections in Hungary, just days from now, stage that struggle. It is unclear whether right-wing populist Orbán’s decade-long friendship with Russian President Vladimir Putin will harm him at the polls.

Toeing a delicate line in his relations with Putin, fellow EU member states and voters, Orbán has tried to present neutrality as in Hungary’s best interests. Yet staying out of Putin’s war will become less feasible the longer the conflict goes on.

Orbán, ever the nationalist, justifies his “cautious, pragmatic stance” on Russia’s war as a defense of Hungarian well-being and security.

On the same day Zelensky pointed the finger at Hungary during his European Union address, Orbán posted a photo on his Facebook page of NATO leaders posing and the tagline: “We support Hungarian interests. We will not let Hungary be dragged into this war!” Likewise at a rally on March 15, he declared to supporters, “We must stand up for our interests… We must stay out of his war.”

In reality, Orbán, Putin’s closest ally in the EU, has never been neutral when it comes to Russia. When the country annexed Crimea in 2014, Orbán was reluctant to impose EU sanctions, arguing “security in the region can only be achieved with Russia.” Shortly before Russia invaded Ukraine, Orbán declared 2021 the best year yet for Russian-Hungarian relations, citing Putin’s “respect” for Hungary.

While the Hungarian leader has criticized the invasion and opened the country’s eastern border to Ukrainian refugees, he has also refused all measures that could assist Ukraine’s military defense, like letting weapons be transported via its territory.

Orbán also rejects sanctions on Russian energy, which would be the most impactful sanctions against Putin, who has long used Russia’s rich oil and gas supplies as leverage with Germany, Serbia, and other European nations.

Similarly, Orbán is also clear about his disdain for democracy. In twelve years of illiberal rule, he has rolled back press and judiciary freedoms and demonized non-white migrants in the name of keeping Hungary predominantly White and Christian. Its repressive laws against LGBTQ individuals, which a referendum on the same day as the election seeks to further, have already sparked European Commission legal proceedings against Hungary.

This is why the upcoming elections, which present an unprecedented challenge to Orban’s power, matter. Six parties, including his former far-right Jobbik party allies, have come together in a coalition to try to defeat him. Led by Peter Márki-Zay, a 49-year-old conservative provincial mayor, they are united in their opposition to what Márki-Zay calls Orbán’s “corrupt dictatorship.”

Orbán has the incumbent advantage in this election — his control of the electoral machinery and judiciary make challenges to election results much harder to win. The war has also been a distraction from Hungary’s economic woes, and the government is betting that tax rebates and pension and wage increases will sway voters more than the opposition’s promises to roll back autocratic abuses.

Orbán’s government control of media coverage is also a key part of any success at the polls. In the 2018 parliamentary elections, censorship and state media influence meant that “opposition views could not even reach significant portions of the electorate,” as analyst Gábor Polyak’s wrote. Since then, media control has intensified. Márki-Zay says he has not been asked to be on television since 2019.

Finally, war is unsettling. Many Hungarians — particularly in Orbán’s Fidesz party heartlands outside the city centers — may rather “stay out of it,” seeing Orbán’s pragmatic and cautious stance as sensible.

Right now, it doesn’t appear as though Orbán’s muted response to Putin has seriously dented his popularity, and the election race seems close. A March 23 poll gives Orbán and his Fidesz party 41% of the electorate, and the opposition 39%. Yet, even if Orbán stays in office, his model of governance founded on the repression of rights, may become less appealing, and his solidarity with Putin an increasing liability.

A Publicus think tank survey shows that even among Fidesz voters, 44% see the Russian attack as an aggression. And 60% of respondents to a recent Euronews poll felt that Hungary has gotten too close to Russia and Putin.

Hungary may also increasingly find itself isolated within Europe, as its ideological ally Poland sees the benefits of solidarity with democracies. In December 2020, the European Parliament approved a “rule of law conditionality” that linked the availability of EU funds to members states’ respect for democracy.

Before the war started, Poland and Hungary launched a legal challenge against it, but the European Court of Justice rejected it. Orbán relies on EU funds, most recently for assistance with Ukrainian refugees, so enforcement of this rule could make things difficult for him.

Ultimately, Orbán’s hedge of “strategic calmness,” and his desire to avoid displeasing Putin, make the Hungarian opposition coalition appear as the resolute and principled force in Hungarian politics. “We have to choose Europe, West, NATO, democracy, rule of law, freedom of the press, a very different world. The free world,” says Marki-Zay.

That message will likely gather momentum in Hungary, no matter what happens in this election. LA County supervisors approve proposal to give themselves power...

Sebastian Vettel says he has ‘clear intention’ to extend...

What is FTTx, FTTP, and FTTN?

Oil Drillers Say Scarce Steel Is One Reason for...

President Biden is taking a serious look at cryptocurrencies

Scientists spot gene that may explain why more women...

Opinion: 5 things you need to know about Biden’s...

It’s time to end the “spring forward” and “fall...

The impact of the first public Jan. 6 hearing

After the Huawei MatePad Paper, here are 5 more...

School Board Apologizes for Identifying Unvaccinated Staff Members to...

Trump ‘Heading Towards an Indictment’ as Allies Receive Warnings:...

Amazon Sees a Bright Future in Free TV (With...