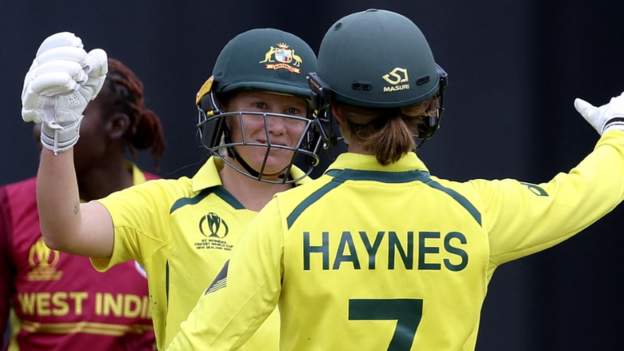 Australia waltzed into the final of the Women’s World Cup with a 157-run dismantling of West Indies in Wellington.

The tournament favourites made light of the green pitch and damp weather – morning rain reduced the game to 45 overs a side – to rack up 305-3.

Alyssa Healy crunched a sparkling 129, adding 216 with opening partner Rachael Haynes, who made 85.

Faced with what would have been the highest successful chase in a women’s one-day international, West Indies were immediately hit by Beth Mooney’s outrageous catch to dismiss Rashada Williams.

From there, the Windies showed no intent, crawling their way to 148 all out, albeit with two batters absent because of injuries.

Australia will meet either England or South Africa in the final in Christchurch on Sunday.

England, the defending champions, meet the Proteas in the second semi-final at the Hagley Oval at 02:00 BST on Thursday.

No mistake this time

Five years ago, Australia were dumped out at this stage by India, but have dominated the women’s game ever since.

This had the ingredients of another upset, not least when West Indies won the toss and asked Australia to bat in potentially treacherous conditions.

Instead, Australia produced a devastating performance, one that will act as a warning to whichever team they are to meet in the final.

They were helped by a sloppy performance from West Indies, who wasted the new ball and dropped four catches. Off-spinner Anisa Mohammed collapsed with a hamstring injury while chasing a ball to the boundary, and bowled only two overs.

The contest was effectively over when Australia piled on the highest total ever made in a knockout match at the Women’s World Cup.

They made light of the absence of Ellyse Perry, the star all-rounder missing out with a back injury. When they play like this, Australia do not need her.

The Healy-Haynes partnership was the fifth-highest by any pair at the Women’s World Cup.

While Haynes accumulated through the covers and off her hips, Healy’s assault was spectacular, with sweeps, reverse-sweeps and balletic footwork. She belted 62 runs from her final 33 balls before she was dismissed.

Healy had survived a tough caught and bowled chance to Chinelle Henry on five, while Haynes was put down on 58 and 61 from the off-spin of Karishma Ramharack. The second catch, to Hayley Matthews at mid-on, was a complete dolly.

By the time West Indies held on to their catches, the damage was done. An unbroken stand of 69 between Mooney and captain Meg Lanning pushed Australia beyond 300.

The second half was a non-event, except for the effort of Mooney, who produced perhaps the best catch of the tournament.

Fielding at a short square leg, Mooney flung herself to her right to grab Williams’ pull off Megan Schutt, holding on in one hand when the ball had almost gone past her.

From there, West Indies’ approach was curious, and their refusal to entertain the chase killed the spectacle.

In the end, with Mohammed and Henry unable to bat, Australia recorded the biggest margin of victory in terms of runs in this year’s competition and all World Cup knockout matches. Former Airbnb executive on why he’s moving to crypto...

Trooper to be arraigned in death of Mubarak Soulemane

‘Batman’ Reboot Poised for No. 1 as Warner Refocuses...

Celebrity birthdays for the week of March 13-19

The Surveillance State Is Primed for Criminalized Abortion

Nigerian student in Ukraine: ‘They said black people should...

Iowa rejected Biden, but president back to sell rural...

Scale of situation led to ban on Russian, Belarusian...

UN report paints dire picture of the Gulf of...

EU to Launch WTO Case Against China Over Lithuania...

World Economy Over a Barrel Amid Energy Price Surge

Wawrinka to return from injury at Challenger event in...